The creation process of the Occultist. Can you recognise the inspirations?

This time we will talk less about the backstory of our Hunters; it is time to tell you more about the creation process.

In the beginning, Occultist was ment to be greatly inspired by the appearance of the nobles from the Polish–Lithuanian Commonwealth from the turn of XVI and XVII centuries. If you are Polish, or you’re into Polish culture and history, you’ve probably heard of Pan Twardowski. You’ve got +100 points of awesomeness, if you’ve already noticed the similarities between Pan Twardowski and Occultist.

If you did not – Pan Twardowski was a Polish nobleman, who made a pact with the devil. In the end: he was smart enough to fool the devil and save his soul. Twardowski was a kind of sorcerer and an alchemist. I liked this concept very much, so I decided to form our new Hunter this way.

So, we had the basis: a nobility costume, XVII century, Poland. 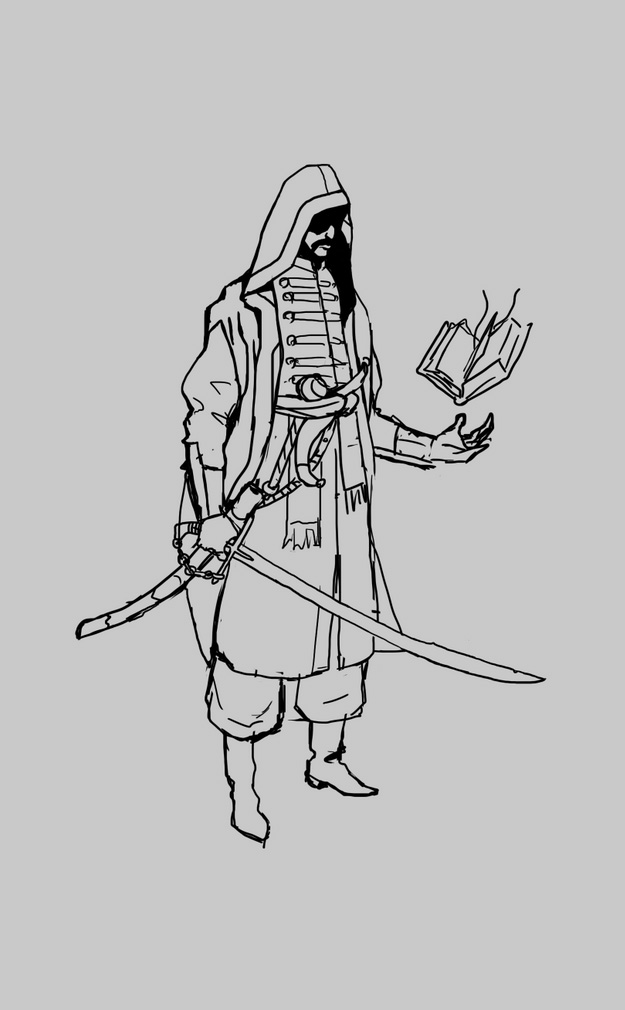 Alder’s Blood is not a historical game, so I wanted to stir up a little bit around the subject. I had tried multiple ways of approach: more classic, “fairy” hood; turban; Polish Hussar’s “szyszak” helmet…I tried it all, but still – something was wrong.
The hood reveals too much about the face. Our vision of Hunters was: “we don’t show their faces”, so the idea with hood was turned down immediately.
Also, the Hussar’s “szyszak” did not fit with the unarmored character. Adding elements of the armor did not help and brough him dagerously close to Antiquarian design (we’ll talk about him another time). 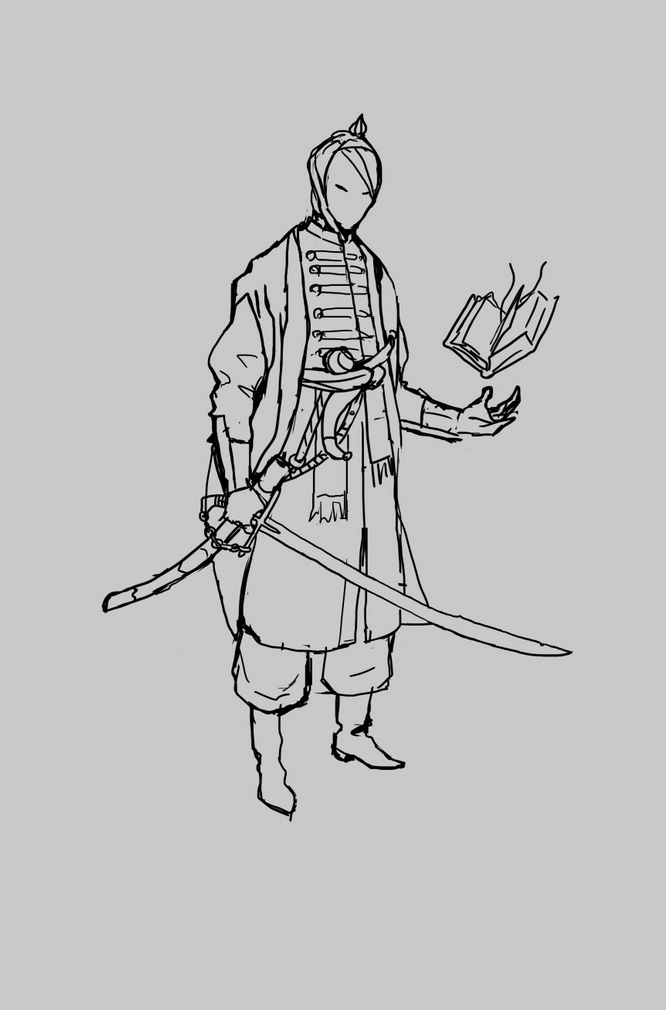 Out of ideas, I found myself to be left without a solution. The most exciting (for me) character design was falling apart in front of my eyes. I couldn’t find the proper headgear and I was completely helpless.I decided to ask Alex for help and together we realised, that we shoud seek for solution far to the East.Middle East was our first destination and it inspired us to cover Occultist’s face with a bronze mask, solving the problem with revealing too much of a face.We’ve covered his head with natural fabric, added a spike at the top of the mask. It was better but still not enough.We were looking for a proper fabric pattern, and – by the accident – we’ve found some interesting pictures of traditional Tibetian clothing, especially the caps. 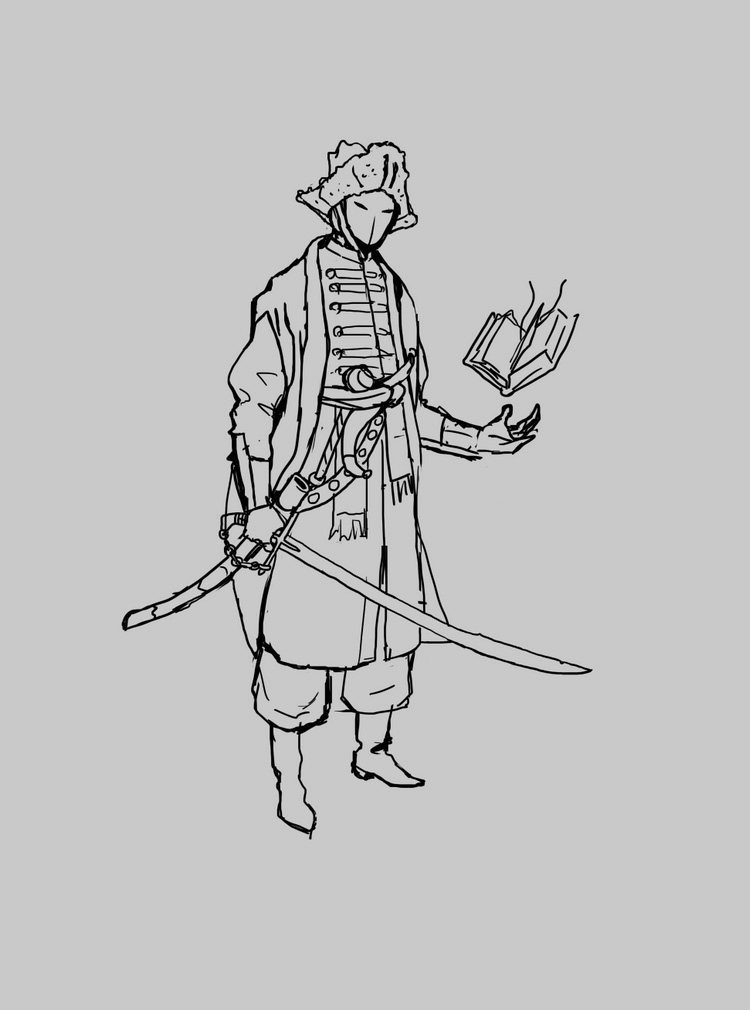 Few hours later, we’ve shared a sketch of Occultist on our social media and somebody pointed out, that the mask looks like Vega’s mask from Street Fighter. Such a comprasion was not what I expected, but the guy was right. I decided to get back to it and solve this problem later.

Besides the mask, his ‘levitating book’ also did not work very well. I wanted to use it during the design process of a different character and I felt that I can figure something out just by using more creative approach.Shortly after, it dawned on me. “Let’s remove his eyes and put them into his hand!”. “Not bad” – Alex said.So the Occultist lost his sight…Well, almost. Instead of the book, I gave him five lavitating eyeballs. In a matter of fact, we can say that he came out pretty good on this business.

As you can see, the process of creating a concept art can make a mess in the history of a character. Now we have built a good starting point for our minds to generate an interesting story behind the Occultist: “Why did he removed his eyeballs?”; “Does he did it, or someone else?”; “No one has so many eyeballs!”; “There’s definitely more underneath his mask”… 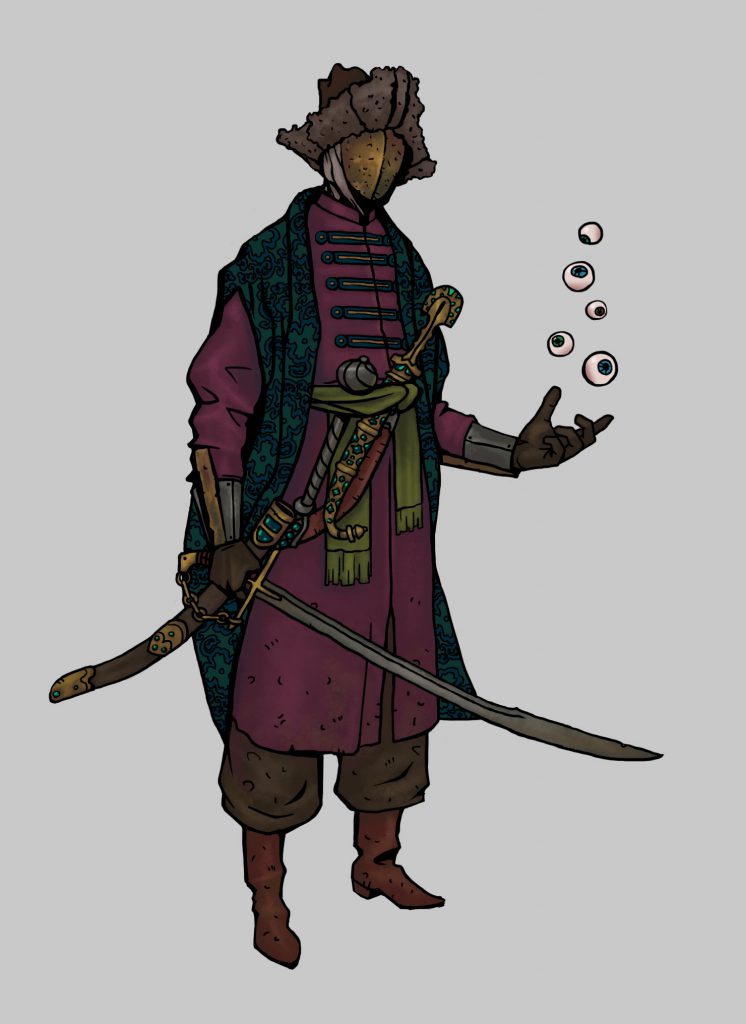 Looking from a gameplay perspective, Occultist is a character specialized in supporting our Hunters. He will be able to “send” his eyeballs for scouting purposes. He can also make the enemies weaker or “cut off” the part of the map isolating his team from the monsters. Also, this character is the closest one to the Darkness. If you “overuse” his skills, you’ve got to be ready for response from the Darkness itself.

That’s it, for now. We will return to the Occultist sooner or later. We will discuss his history and connections to the Darkness (maybe you guys have some ideas?). Hope you enjoyed this article. See you next time!

P.S. Here's the video showing our Occultist with the background behind him:

Its even an eye straining effort to make out WTH is going on your screen in the video..