Version 10.B is now Live, complete with new units/features, and a long-awaited rebalance.

It was my intention to include in the next major release the 3rd New Horizons campaign mission (for the Soviet/CSTO faction), however the mission map is so large/complex, it has taken longer to create, and indeed will take more time than planned. I intend this to be included in the next release (which should be called Version 11, unless minor updates are introduced beforehand). On the flipside, once finished, the mission will quite possibly be the most detailed mission map so far, based on a real-life location.

Version 10 was a significant update, which included the option of launching the game in 2 ways; the 'standard' (Offline) launch, or the option to launch the game via CNCNet for Online play versus computer and human-controlled teams alike. For the juicy details of what's been changed in the previous versions, please do read my older articles.

As for Version 10.B entail, as part of the next mission map currently in progress, there is a significant portion of completely new assets which I have decided to include so that players can get better acquanted to the various changes. Some of the new assets will not necessarily be obvious/visible until the Next version release, but the most obvious will be new units/features, available to both the Allied/NATO and Soviet/CSTO factions, based upon real-life counterparts.

Let's look at some of the new additions Version 10.B brings: The Tigr (tiger), manufactured by Gaz, is a 4x4 utility vehicle available in various versions. It is a light troop carrier, and the version used in New Horizons will feature the remote-controlled machinegun turret, as well as the fashionable paintjob used in the Victory Day parade (as shown in the picture above). In the game, it will be able to comfortably transport 4 soldiers with their gear. This vehicle is commonly seen in deployment as part of the Russian Military Police units in Syria, assisting in official security assistance operations against NATO-backed 'moderate' terrorists. 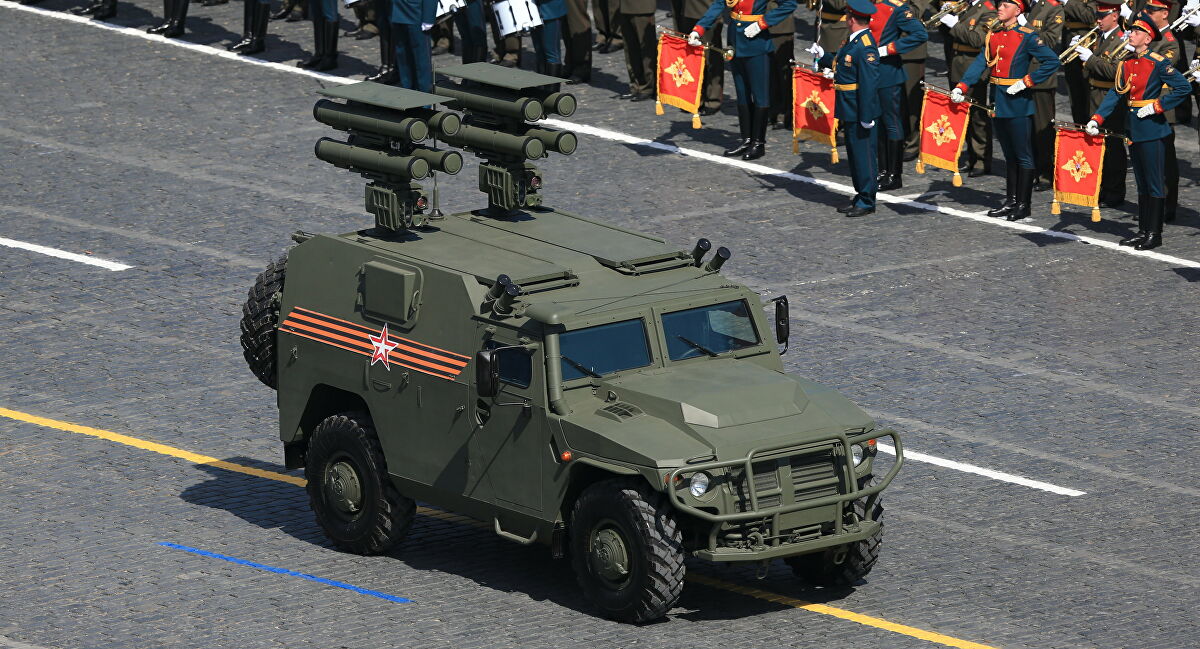 The Kornet-D is another variant of the Gaz Tigr, this time swapping out the dedicated troop compartment for two banks for four Kornet ATGM's. Modern Kornet ATGM's are a very potent anti-armour weapon; each missile boasts a tandem HEAT warhead capable of penetrating 1,100-1,300mm of armour behind ERA. In the game, this vehicle will be available with a unique new feature; the ability to change firing mode, as well as it's behavioural characteristics. As standard, the vehicle will have both quadruple launchers erected, in itself offering formidable firepower. However in this mode, the launchers will be mostly forward-facing, and thanks to the somewhat limited firing field-of-view, the whole vehicle will need to turn to face a target. Players can choose to deploy to and back from a second mode; the single launcher one. Once in this second mode, one launcher will be retracted back inside the vehicle, while leaving the other one up. Although the missile firing rate will be effectively halved, this launcher can traverse 360 degrees. In this mode, the vehicle will adopt more of a hit and run tactic (after all, this is a light armoured vehicle). Regardless of firing mode, the missiles are homing; they will lock onto a target. The missiles are primarily meant to target armoured ground targets, however if necessary they can be fired upon slow, low-flying targets, such as helicopters. The Kornet-D used in the game will be sporting the Victory Day paint too. 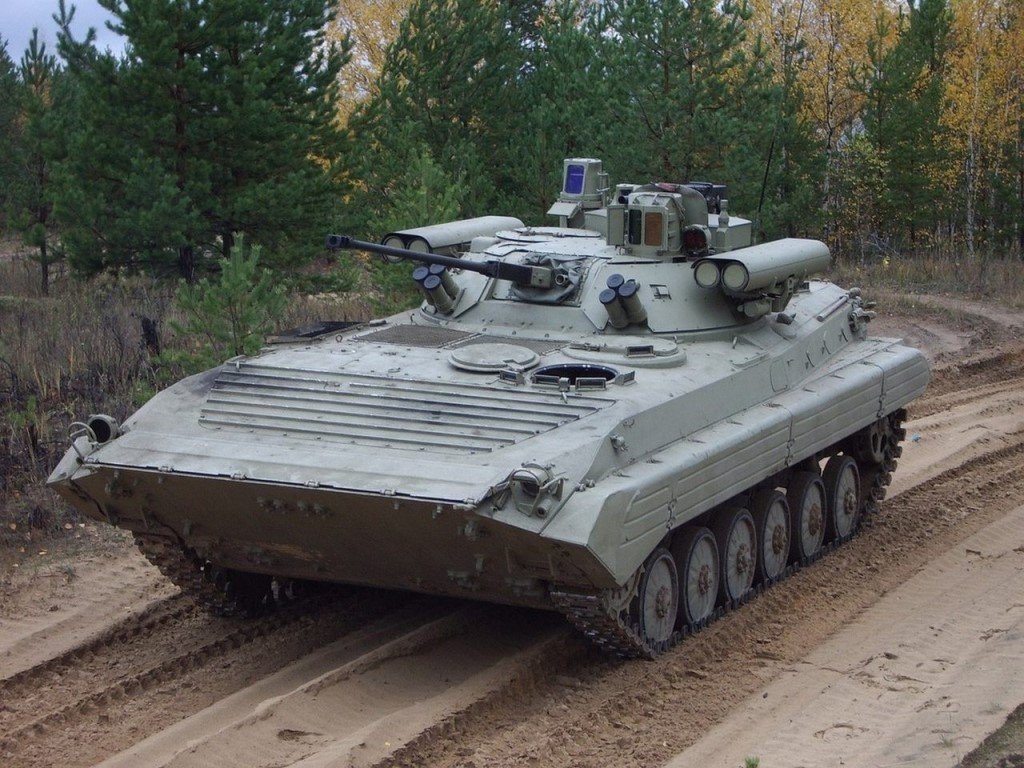 The BMP-2 has been given a modernisation in the Russian Army to BMP-2M standard. Besides a fairly standard 30mm autocannon, it now has two banks of two ATGM's, mounted either side of the turret, somewhat similar to it's much bigger, much more expensive modern cousin, the T-15 HIFV (the 30mm cannon variant, not the 57mm variant). In the game, it will behave much similarly to the standard BMP-2, and is primarily an infantry fighting vehicle, but now with enhanced anti-tank means.

And for the Allied/NATO faction; 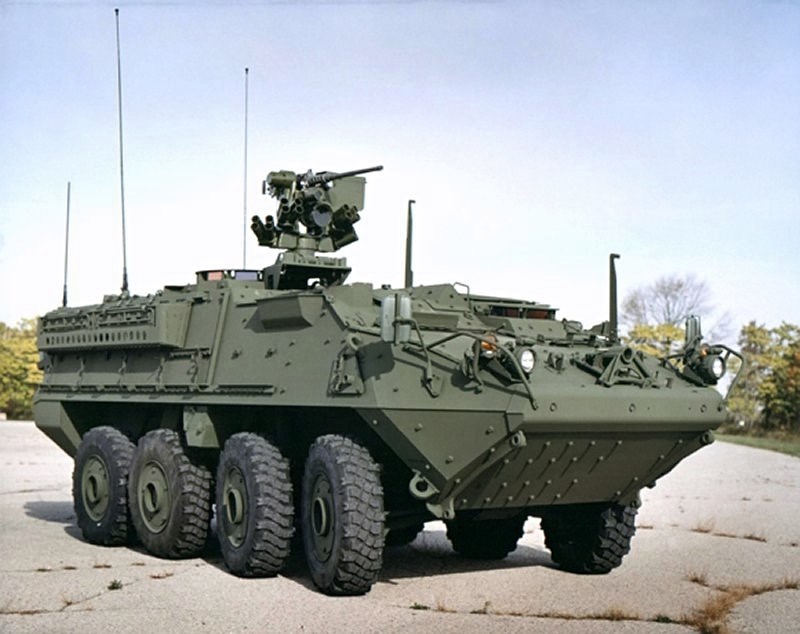 The Stryker family of vehicles have now been introduced into the New Horizons mod, in multiple variants too! The first being the M1126 Stryker Infantry Carrier Vehicle (ICV). Being a wheeled platform, it has the advantage of higher speed, over tracked vehicles. It can be considered a more modern, better protected, more mobile replacement for the now-ageing M113 tracked transporter. It can carry 9 soldiers with their gear. The M1126 has seen extensive use in NATO's wars of occupation in the Middle East. 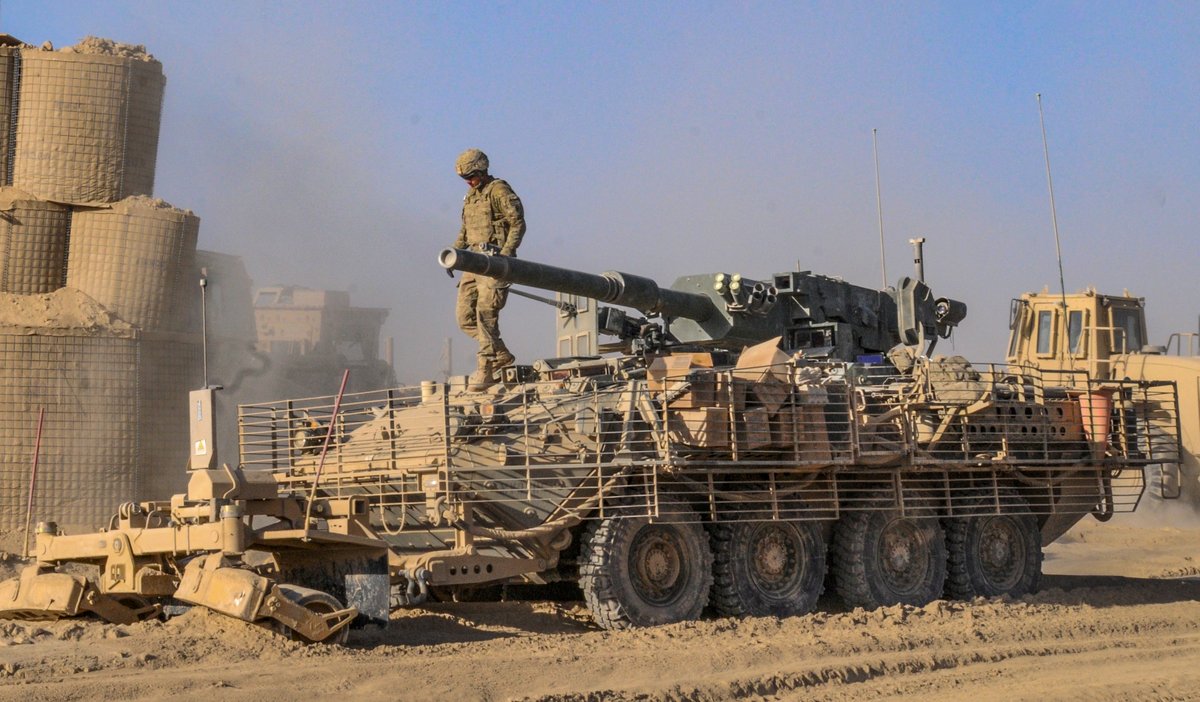 The second Stryker variant introduced in Version 10.B is the M1128 Stryker Mobile Gun System (MGS). This version carries a 105mm gun (that was installed on the M60 tanks, and M1 Abrams), and is meant to offer supporting firepower against armoured targets and fortifications. In New Horizons, it will also be able to fire a secondary machinegun, and will also be available as an optional up-armoured variant with slat armour (as seen in the picture above). Do bear in mind this in Not an MBT, so don't use it as such! 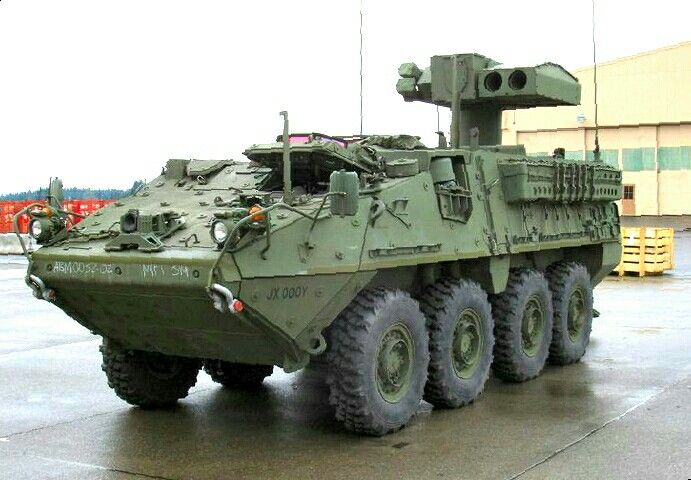 Finally, we have the M1134 Stryker Anti Tank Guided Missile (ATGM). This variant of the Stryker carries an ATGM system, which carries modern TOW missiles. In the game, this vehicle could be considered to have a similar role as the Kornet-D, in that it has fairly good mobility, and a fairly potent anti-tank missile weapon (which can also engage slow, low-flying targets, such as helicopters). Modern TOW missiles have been used extensively in the Middle East, proving effective against obsolete (60-years-old) soviet tanks such as T-54's, T-62's, and early-model T-72's. Interestingly, their effectiveness against modern Russian tanks has been brought into question, given the video showing a 'moderate' terrorist (generously given a modern TOW by NATO) in Syria firing one at a T-90, and barely making a scratch (the situation made more precarious for the Syrian Army tank crew, whom were sitting still with the hatches Open, and the APS turned Off, yet they still walked out, obviously dazed).

There is a significant rebalance that has taken place, which will make encounters in the game more varied, and less predictable. This addresses multiple areas where it was somewhat easy to abuse the game. Units/features that before could be described as Over Powered, have now been rebalanced, so that they in fact do have proper weakneses while at the same time not losing their main purpose. One such issue was with some missile units firing missiles with seemingly unlimited projectile range, which led to some surprising issues. For example, sometimes you could airstike an enemy base with a jet, have the jet dodge some AA missiles, have it fly home, only to then me dumbfounded to see the plane (and airfield it landed on) explode moments later. This was caused by slow-flying missiles that were playing an odd game of catch-up. This has been finally remedied by giving more missiles a pursuit range; a range they will follow a target before running out of fuel, thus making it possible to outrun some AA missiles. Another thing I wanted to change was the issue of loading up some APC units, only to make them more powerful than one or more MBT's! For example, a BMP-2 filled with missile and flamethrower troopers just became too powerful, even for several tanks. This has been remedied by giving many heavy soldiers a sidearm pistol to use, when placed in a vehicle with firing ports. Not only is this more realistic (firing a rocket from within an enclosed vehicle is very dangerous!), but it makes the game more fun, as these units should disembark from the vehicle to use their main weapons.

Besides the functional rebalance, there has been an overhaul in terms of economic rebalance in the game, which will make things much more interesting also. Heavy units, such as tanks, planes, and helicopters, are now much more expensive than compared to light vehicles, which means players will actually be required to be more thoughtful when it comes to frivolous spending. Now, it is much more viable to build several upgraded light vehicles, than to build one heavy tank. This is something that has been given much consideration into.

I have also enabled another Ares feature; by increasing the number of player colours to choose from (from the original 8, to 16, in fact!). The new colours are unfortunately not available for use in online launch mode of the game (yet), and you need to pay attention to the colour description when selecting a colour.

Lastly, there are miscellaneous changes. Most of which are mundane, or I simply haven't kept track of (it can be easy to forget things I've changed!). For example, AI improvements, and neatening/trimming code, some light debugging.