Piracy never dies! That's a bad thing when we're talking about real life pirates, but NOT when we're referring to our latest release. So what's new? Read on to find out!

As usual, there's a whole bunch of fixes in there. But what NEW stuff is there to enjoy?

Well, a huge amount of work has been done on the ships for a start. Existing ships were improved, with better textures, more accurate rigging and more ropes. Additionally, we finally figured out how to increase the draw distance for the ropes and the rigging so that you'll be able to see it much more frequently.

However, there is also a whole bunch of brand new high-detail ships, such as movie-accurate versions of the HMS Endeavour and HMS Dauntless at last, as well as a movie-accurate HMS Surprise from the Master & Commander movie. Additionally, the HMS Indefatigable in the Horatio Hornblower storyline also looks much better than before.

For a small sample of the improved ships, see these pictures: 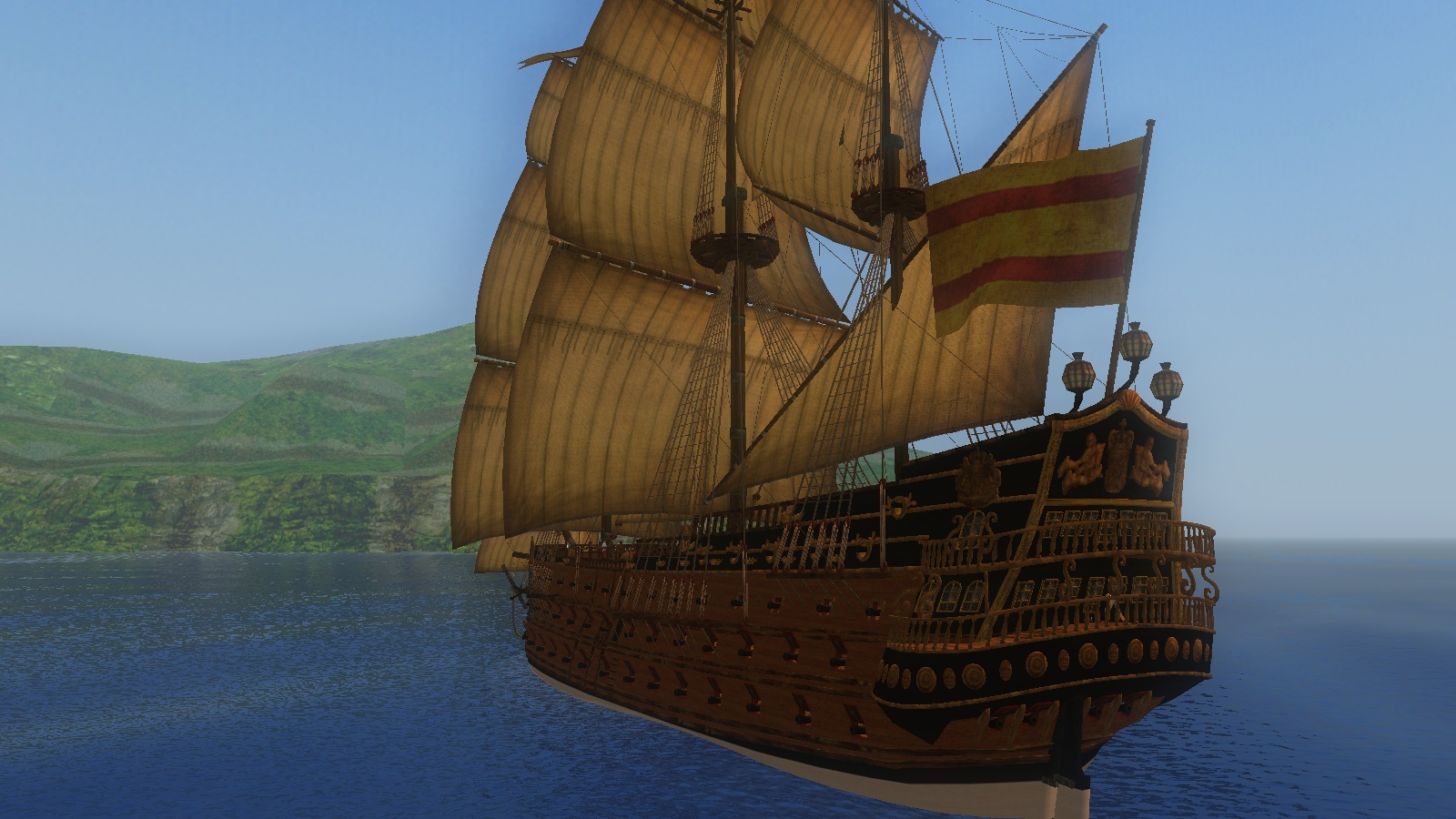 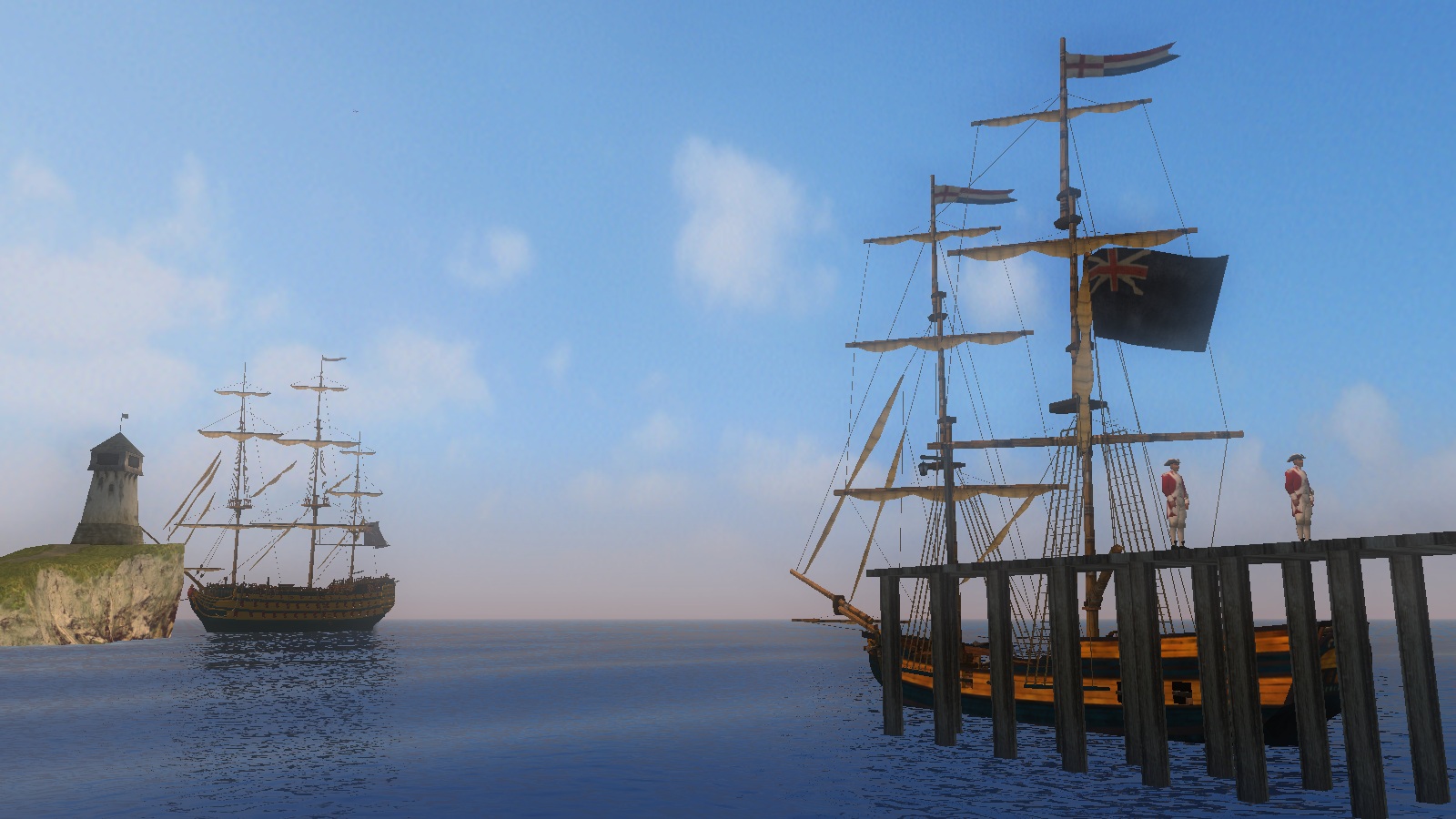 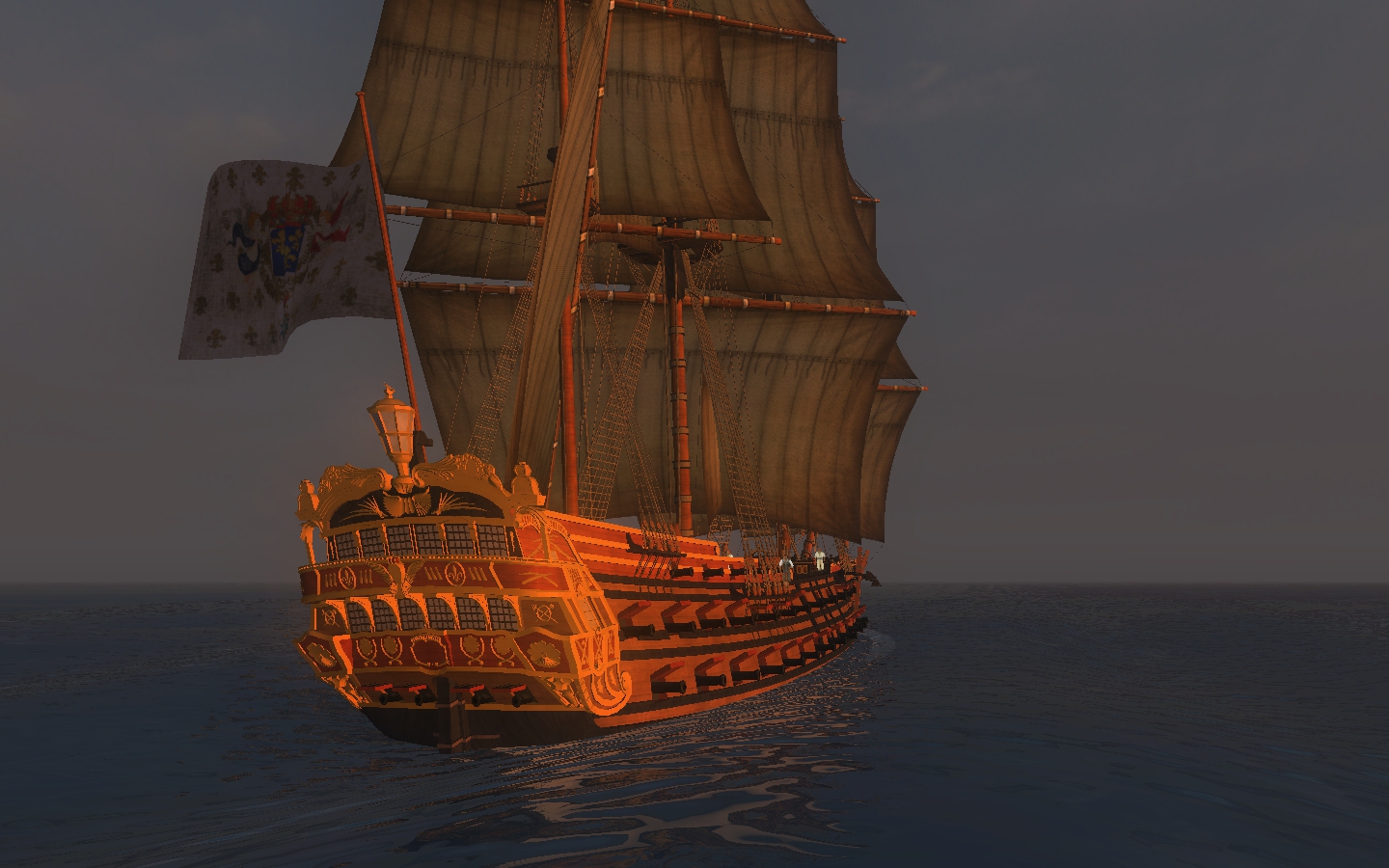 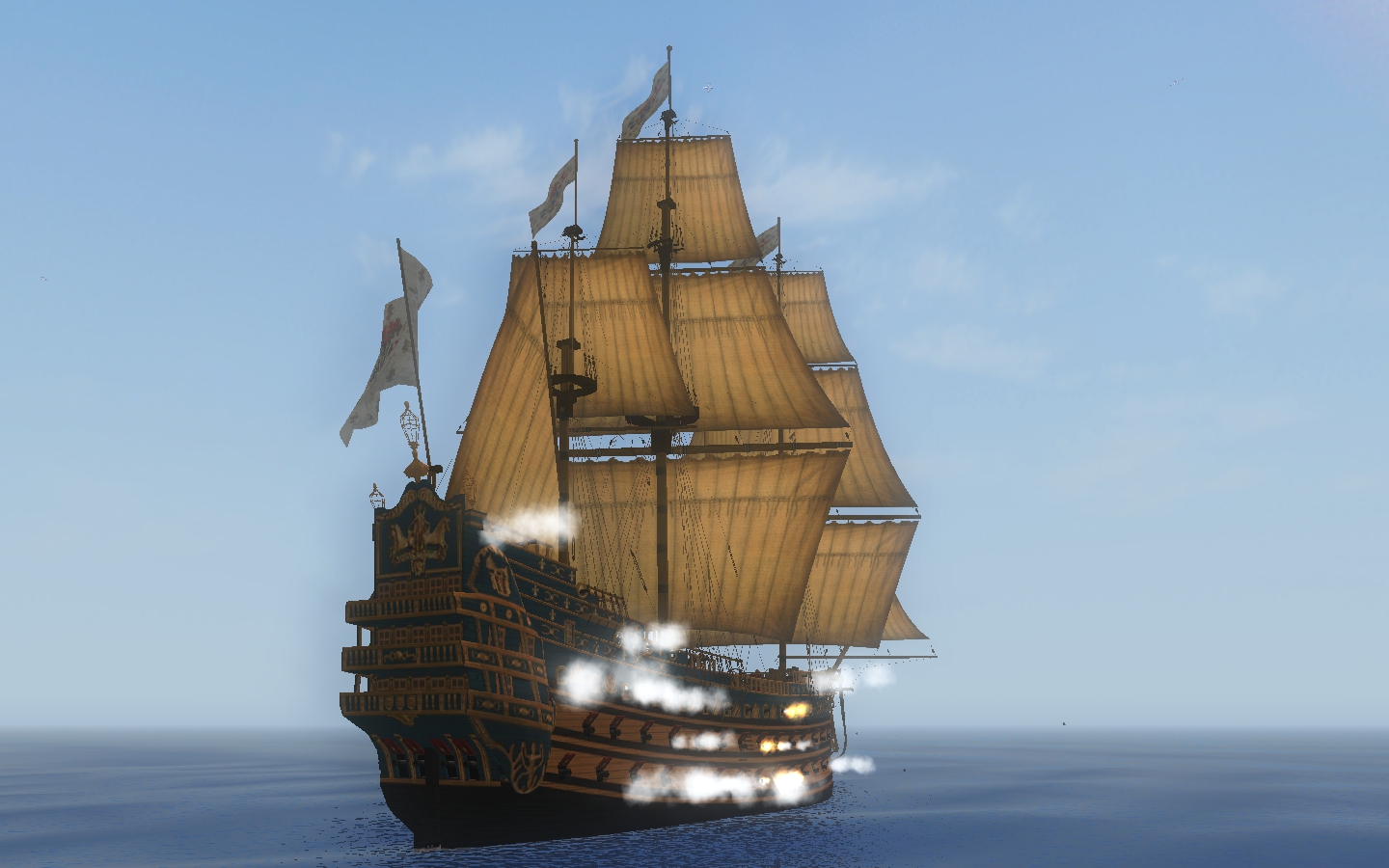 However, a lot more can be found on our ModDB Profile's Images Page.

Gameplay has been much improved in sea battles, because non-player ships are now more aware of the wind direction and will tack properly. So that means they will no longer get caught out in Realistic Game Mode as before, making the battles more interesting than ever before. 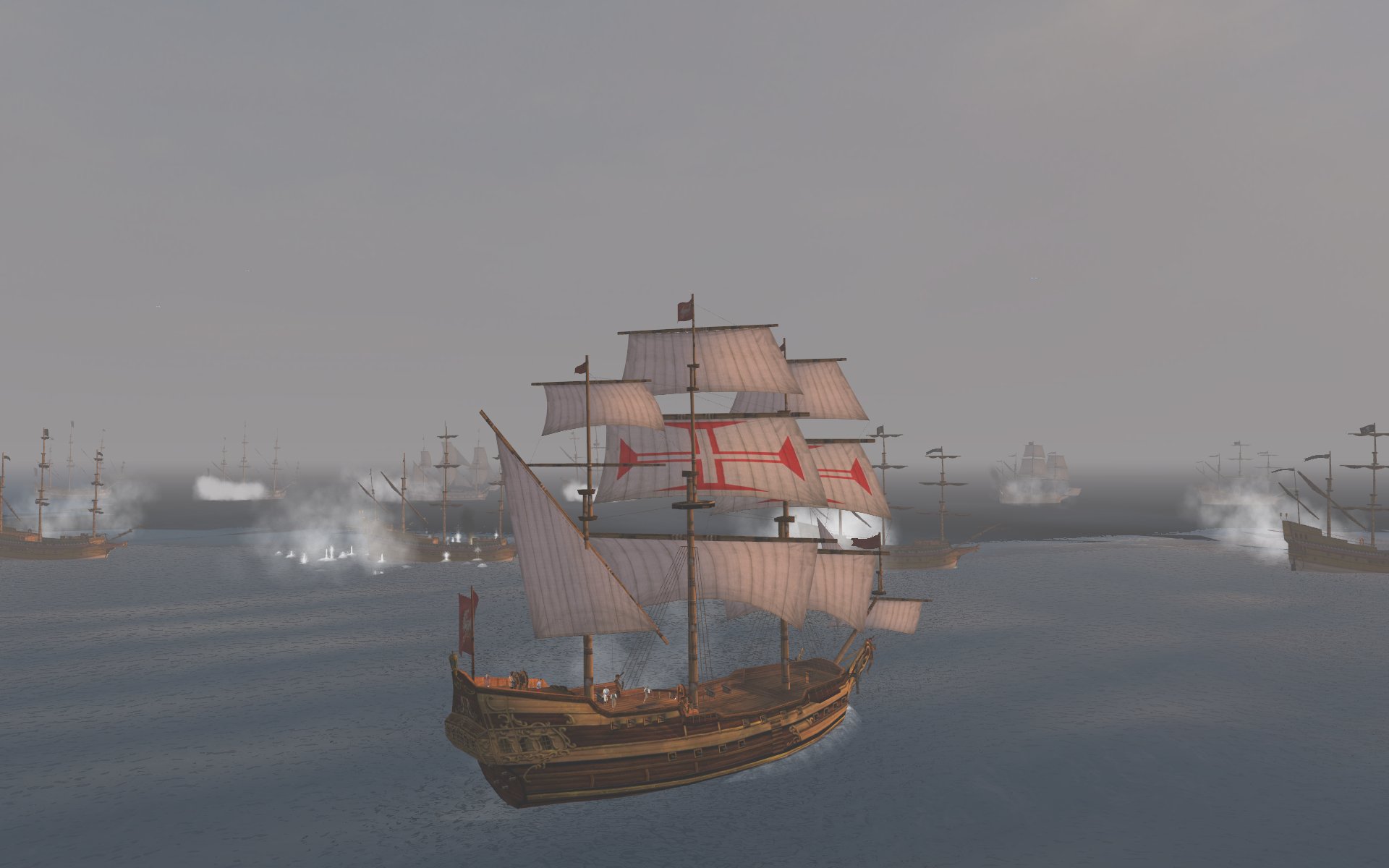 Another massive improvement concerns some interface work that we've been wanting to do for a long time and have finally been able to do. All schematic ship icons in the game have been replaced with actual screenshots. This means that you can finally see properly what ship you are buying in the shipyard interface. Additionally, the Ship Repaint interface is helped hugely by this. And as icing on the cake, there is now proper descriptions for the ships in there, describing the colour scheme and providing historical background information. See here for a sample: 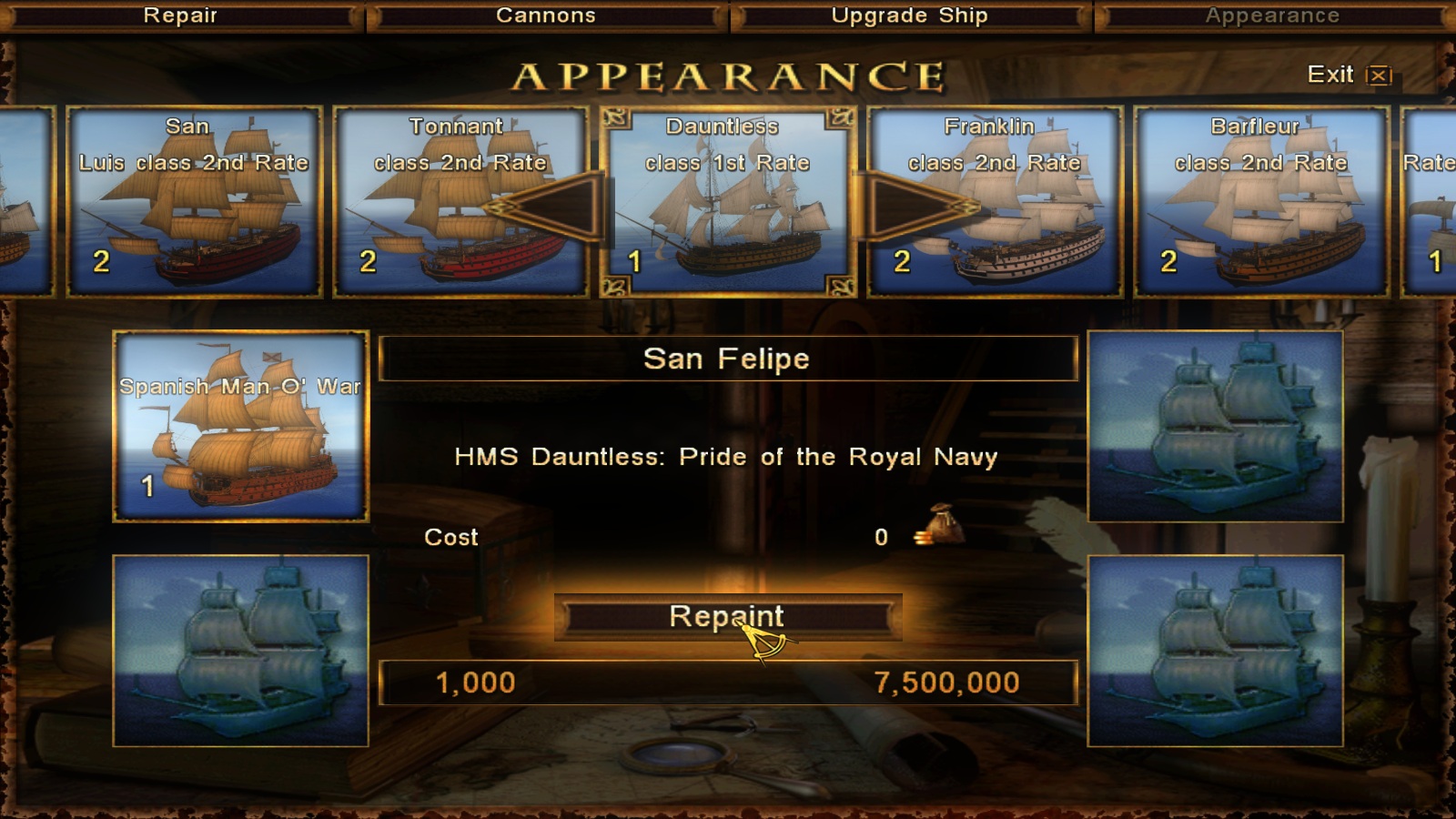 And for those who like our storylines, new parts have been added to the Bartolomeu o Portugues and Assassin storylines involving a completely new El Morro fortress location and Aztec treasure to be stolen from the Spanish!

So what are you waiting for? Head over to the Downloads Section and get your dose of piratey, nautical and historical fun today!

Looks quite interesting might have to reinstall the game

Well worth it mate :)

Nice that there is an update, but unfortunately this mod doesn't run on my pc. I don't know why, but I get always an runtime error or something. ANd that is only in the mod. The main game runs perfect.

I can only run this mod in an virtual Windows XP in VMWare, there not good performance -.-

Do you have the game in the Program Files? As long as the unmodded game works, the mod should work too. Please see here and enable error logging: Forum.piratesahoy.net

Do you have the game in your Program Files folder? If so, move it somewhere else, say C:\Games\Pirates of the Caribbean or so. Make sure you install the modpack to the exact same folder that the game is in. Also make sure that even if you use Build 14 Beta 1 Path 6 Full, you still install Build 14 Beta 1 Full first.

When installing.....if prompted to replace items in the folder comes up....my options are: yes, yes to all, no, and no to all.....what should i select?

"Yes to all". If you don't overwrite the files, you don't get the new ones.

I need help with this mod. I have the latest version (original beta 1 full with patch 6) and have installed it as shown. Problem is when I start the game. It gets to the menu fine but is IMMENSELY laggy. The framerate must be about 2 or something. Starting a game doesn't help, it's still laggy. I've taken it off safemode (for some reason it was on) and also set every graphical option to low. I'm not sure why this would effect anything as I have a great PC and it didn't.

Basically the game lags to an unplayable point and I'm not sure why. Note: The original game was just fine.

By any chance when you were installing Build 14 beta 1, did you also install ENB and/or Swiftshader when asked? If you have a real video card Swiftshader will disable it and you will get very bad performance. Also, did you run "rename.bat"?

Ah yes the problem's fixed now. Not sure if it was Swiftshader or ENB but now I've reinstalled everything it's gone. Thanks for the help. I guess I shouldn't have simply ticked every box without checking what happened.

Indeed you can't select the additional stuff without making sure you actually want it. And I swapped the names, which also doesn't help. So it's best to not select any of it. All the actual mod content is in the main part anyway.

Where do you get maps now? Also, treasure hunt most of the time has no loot.

Maps are still to be found in the merchant's shops, but they are not common and cost more. Sometimes street merchants have them too.

It sounds like you are having a streak of bad luck. Just recently I struck it rich with two in a row.

So i'm back from my holiday and i'll be needing this latest download to see where we are at. I'll be a few days just getting my routine back in order but then i'll carry on with helping out where i can.

I need help by this mod. If im trying to play it it goes very laggy.
And if I exit the game there are new files extracted i think? Those are files called: seadogs2_0000.tga etc. does anyone knows?

Are you still having problems with this?

On those TGA files, you probably pressed the "make screenshot" button.

Is there any way to fix the seadogs2_0000.tga thing, Since when i start my game i am not pressing anything