In our continued pursuit to provide the highest level of realism, Scotsman will be sharing the new High Explosive model with a screen shot and documentation that helps outline the major impact this will have on the game. We'll also show you a first look at the new "Steam" user integrated account creation and server selection screen, and outline our new "Basic Training Required" UI flow. Buckle up, the development train is moving full steam ahead!

In our continued pursuit to provide the highest level of realism, Scotsman will be sharing the new High Explosive model with a screen shot and documentation that helps outline the major impact this will have on the game. We'll also show you a first look at the new "Steam" user integrated account creation and server selection screen, and outline our new "Basic Training Required" UI flow. Finally, we're encouraging Squads again this week to prepare to bring on new users, as we're already seeing a noticeable increase in population. Buckle up, the development train is moving full steam ahead!

Cornered Rat Software has prioritized increasing the realism of our game and with the amazing efforts from Scotsman we are getting more realistic and efficient. We've talked a bit about the New HE model but today, we wanted to show case what this looks like to add some more context of how powerful this advancement is for all of our realism fanatics here at WWII Online! - Great job Scotsman!

From Scotsman (WWII Online Military Advisor): The image you see below is of new HE data operating in the new HE model. The new data set correctly simulates every munition in the game for proper fragment size, mass, and velocity. Higher mass or higher velocity fragments reach further than smaller, lighter, or lower velocity fragments. There is variance in each and every explosion, no two explosions are alike, so you may be wounded in one instance and killed in another depending on the size and velocity of the fragments that hit you. All these distributions are built around the physical properties of the ammunition to include type of explosive fill, the amount of explosive, and the construction of the ammunition. Original factory production diagrams of all munitions were used to generate the data. Shell or bomb casing length, width, and wall thickness etc are all accounted for in the calculations.

Data generation is complete and this is going into Q&A testing. Expect it to go live shortly after steam along with many other changes. Updates in work include changes to the HEAT modeling, armor modeling, and a complete audit of small arms accuracy for all weapons. (prompted by forum user requests) This updates small arms performance to the like new factory acceptance standard firing standard WWII government issued ammunition.

You might also add that this means that bombs, mortars and HE will finally work as they should - same calculations as used in US Govt. weapons effects testing. 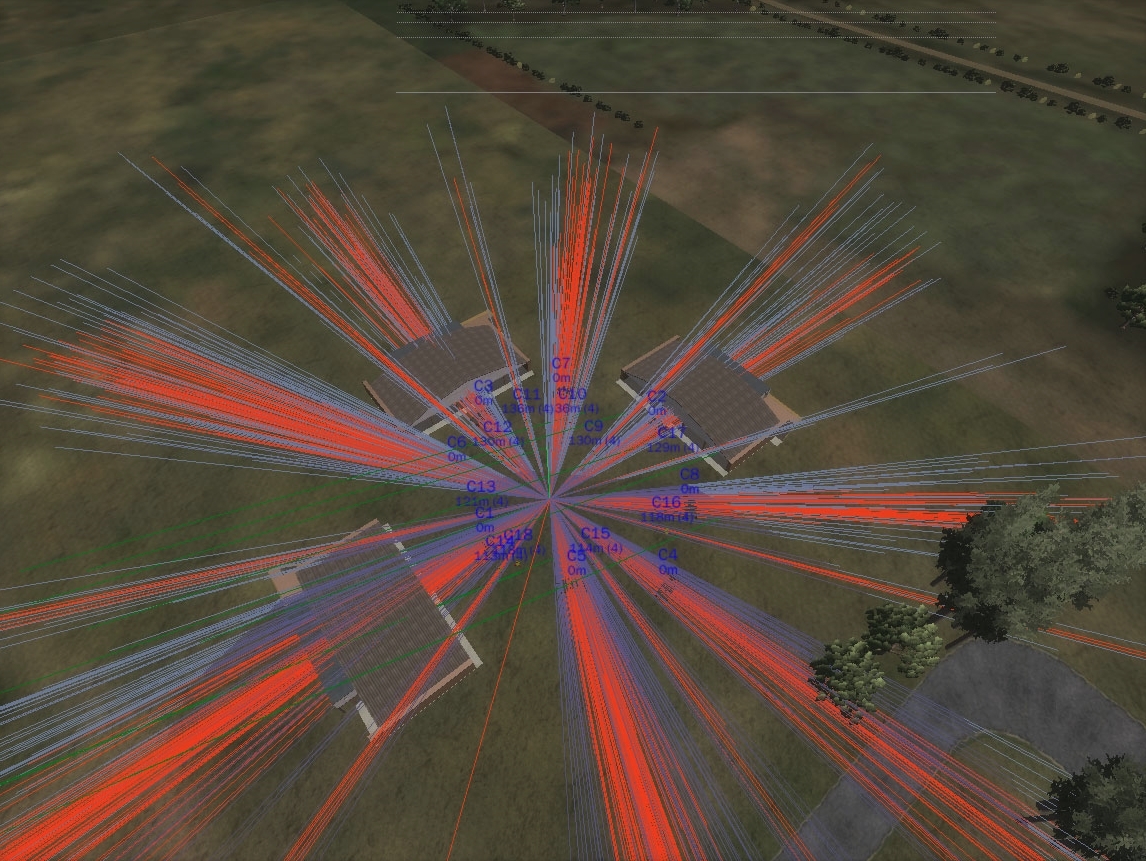 As part of our plan to help simplify things for Steam users, we've taken into consideration the whole UI (user interface) flow for creating your account, and selecting your server. Below is our first iteration of how this will work, users will select "Join the Battle" which will be the Campaign server, of course there's the Training Server and Offline mode. Normally these things have been controlled outside of game but we figured it's time to start integrating it in, and we're quite pleased with how simple this has made things.

After Steam's release we'll begin examining how to do something similar for our organic (existing) user base as well. 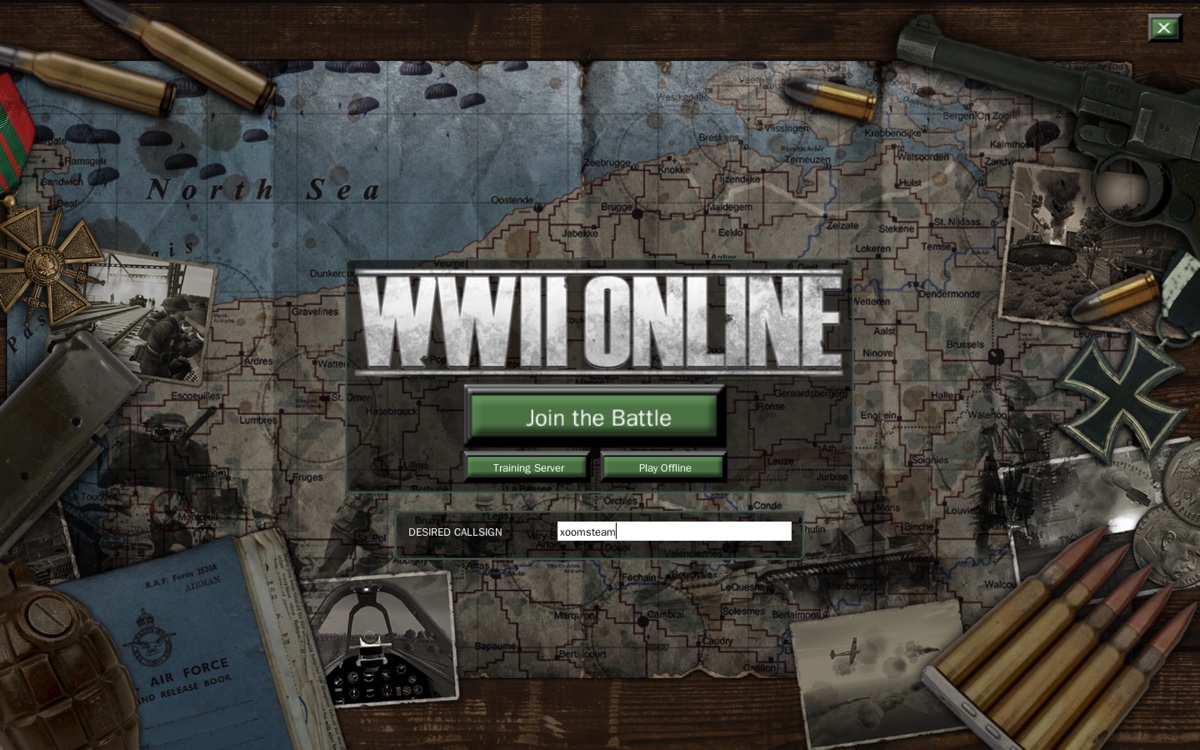 Here's a look at what new users will be presented with after they create their account and attempt to join either the Campaign or Training Server. Immediately new users will go into Basic Training so they can learn the basics of, 1) Movement, 2) Rifleman usage, 3) How to chat with other players, 4) How to navigate the map and icons, 5) HUD "Heads Up Display" overview. Once a player has completed these mandatory training requirements, they will then select their persona of choice, and be prompted to join a WWII Online Squad. Training will become mandatory for both organic and Steam users (all) in an effort to better prepare users for the steep learning curve ahead. CRS believes that these basic things are an absolute necessity to give them the proper tools to be successful. 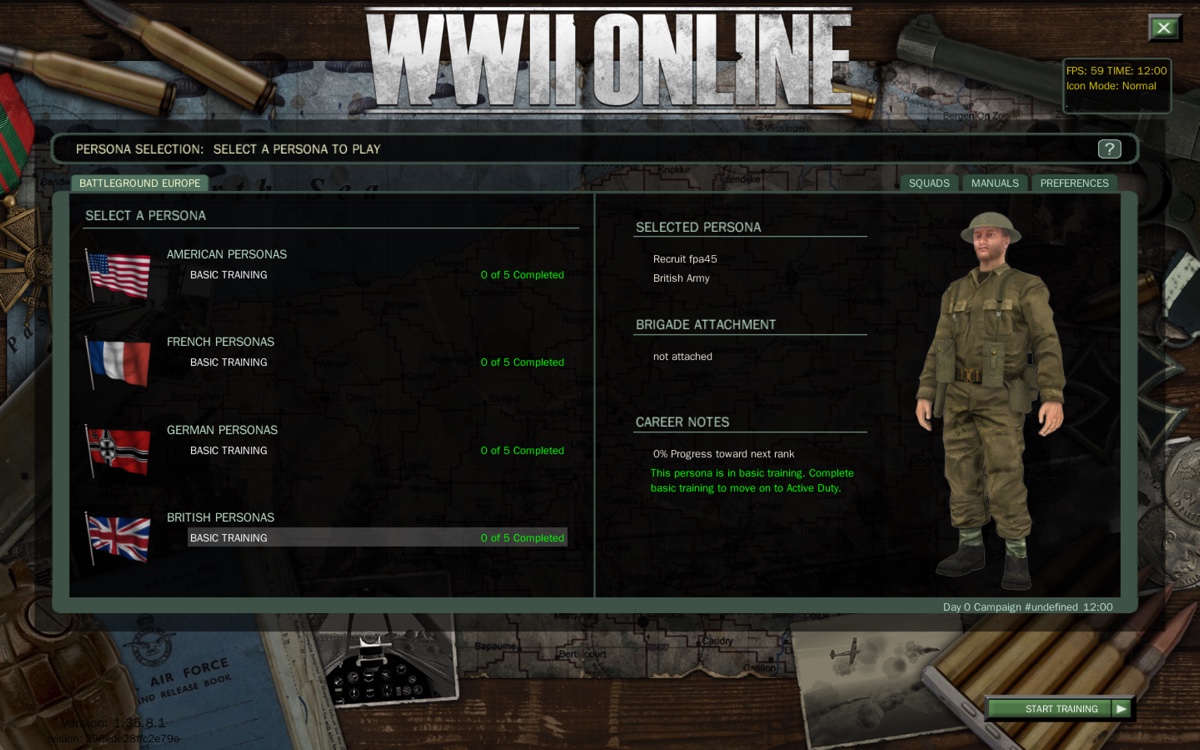 Immediately after a new player has completed their basic training requirements, they will be able to select a persona. They will be prompted with an active list of Squad recruiters who are online and in a mission at that time. We highly encourage all new users coming through the door to join up with a Squad as it will greatly improve your game experience here. This is entirely a team based game, and while we do offer lonewolf's to do their thing, organized numbers will always win.

By joining a Squad you will immediately get help with all of your questions and learn how to play the game. One of the biggest draw's of WWII Online is its scale and when your Squad is working together, on voice comms and heading towards a target, it's quite exhilarating and you can dominate otherwise unorganized forces.

We shared this screen shot last week but wanted to display it again to have context to what we're saying above. 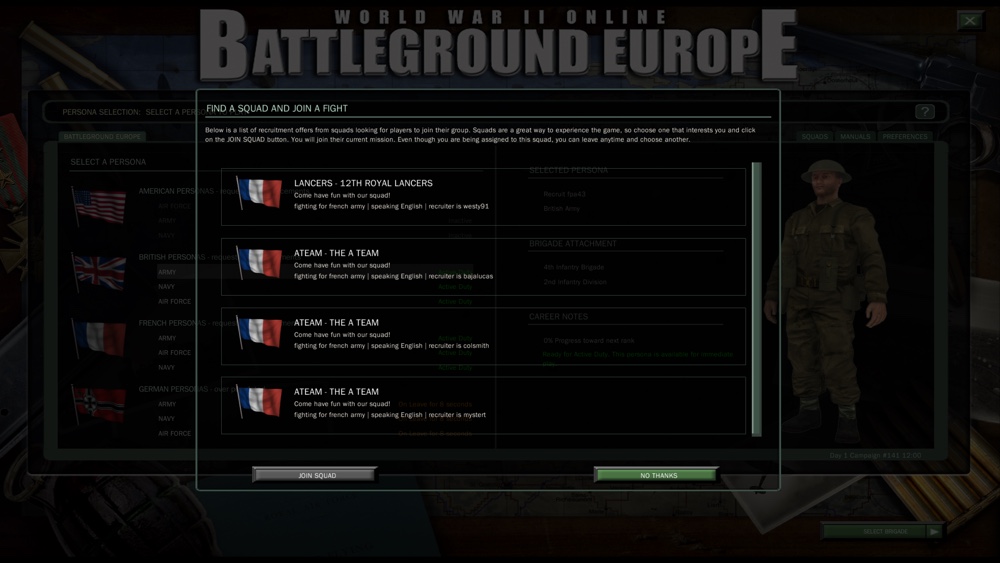 We have seen that we're seeing returning and new users join back up with the game in preparation for the upcoming Steam release. Folks are looking to build rank and gain a competitive edge and the Rats are more than welcoming it! We're also receiving confirmation that through this climb in numbers just how important the game population alone can dramatically improve battles in World War II Online. We have seen some AMAZING fights over the last couple of week's and I have personally been in-game with fellow Rats along side Squads on both the Allied and Axis side, it's been seriously awesome and is an encouraging factor of what's to come.

That's all for now this week, much more activity behind the scenes in progress.