Information on the new non-playable factions in the mod.

Hi everyone, i'm here to announce the creation of 2 new non-playable factions that will be featured in the mod. The Rakatan Remnant, and the Dread Imperium.
The Rakatan Remnant is the result of Rakatan survivors who have rebuilt their fleets and now have taken several planets as their own. They have also enslaved those they have conquered and are a galactic threat.
Space Units:
Rakatan Ship
Rakatan Fighter 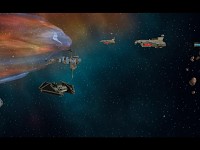 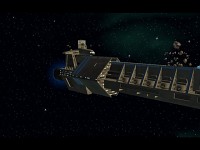 The Dread Imperium is the result of the Dread Masters being freed from Belsavis. They have carved out several worlds into which have been dubbed the Dread Imperium. These worlds are overrun by vicious monsters, and soldiers terrified into obedience.
Space Units:
Terminus Destroyer
Oppressor Destroyer

Cool, are the Rakatan warriors melee or ranged?

That will be interesting, i have a suggestion. They should either have more health or be faster than normal troopers so they dont get mowed down before they reach your troops.

They're going to, seeing as they are few in numbers, their primary ground force will be slave units