Introducing a few new characters for DP – the Sith master Darth Whirmah, hailing from the world of Dromund Kaas. The other one is the LEP Assistant Droid, you might already know from the animated show. Also we have a new channel/hub for daily updates (check it out below).

This time there won't be big news, but there is still something we must show and tell you. First of all, we have a new hub for our daily news on The Dark Pastime mod, that we made in Telegram app. It's not an alternative, but rather an additional source of information, which will include only small bits of information, some screenshots, pictures, sketches, various comments and small stories, related to DP. You can check the latest daily news here: The Dark Pastime Channel. Feel free to join!

For discussions and comments, please use JKHub and Moddb as before ;)

Aside from this we wanted to introduce one of the new characters in the Dark pastime mod, which actually isn't that new. In the past we mentioned him as a "mostly our own creation", but it's one of those things which we usually don't want to reveal before the release, but today we would like him to bring to the light: it's a Sith Lord, actually a Sith'ari, hailing from Dromund Kaas – Darth Whirmah. 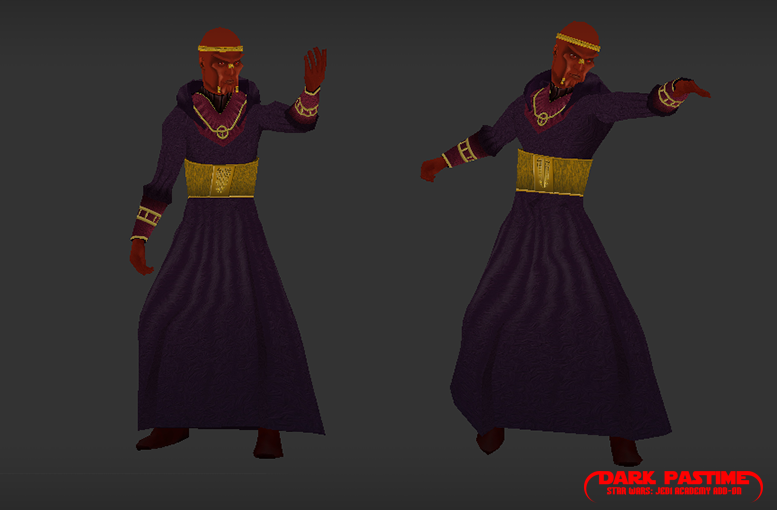 Darth Whirmah, a Sith Lord from the old times.

There isn't much to tell about him right now, his biography and role in the story. I can only assure you, that he isn't the main antagonist and isn't the mastermind behind the events in DP. The origins of Darth Whirmah will be revealed however via our DP channel, mentioned above. 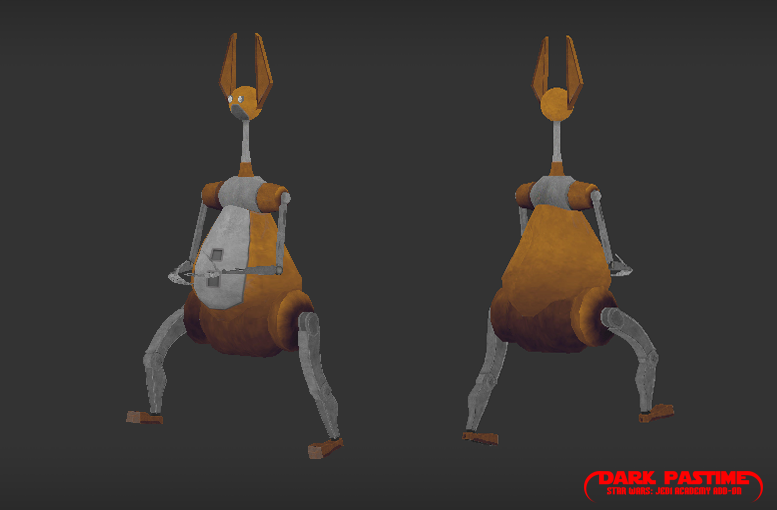 This one is an "unlikely hero", yet the little cute droid from the Clone Wars era found his way into the story in DP. Used on many occasions both the separatist generals and the Republic senators, the droid model became less and less popular during the Galactic Empire reign. Yet it could still be found in various Outer Rim worlds, such as Rutana or Uffel. You'll meet these a few times during your adventure.

As always, we are open for comments and suggestions, which you can post here or on JKHub.

Love the look of Darth Whirmah, quite regal!

As always, each update shows a wealth of material, keep it up! :^)

"it could still be found in various Outer Rim worlds, such as Rutana or Uffel."

Neither from the already known two planets, but nicely spotted! Yes, I do know about Rutan, and in the past one of the fans asked me the very same question. However the two planets are unrelated and Rutana is a completely new place. However there will be some explanation to the name. ;)

Nice to hear about the latest news. Keep it up! )

Oh i would like a mod that would make Darth Whirmah playable in normal singleplayer campagne.

Please tell me this isn't dead