Retro-Pixel Castles now has a price on Steam, and a new feature-filled release is now up for download! Come get it!

If you're interested in getting a copy, you can also check out the already-funded kickstarter that still has about two weeks left, there are many tiers that offer a free copy of the game that are much lower than the $14.99 pricepoint Steam has authorized. :)

The latest and greatest build has finally been released! This build features a ton of tuneups, bug fixes, runs faster, uses less memory and it much more stable! Woot!

- Overall load speed increased by about 25-30% (More on lower end machines)
- Villagers no longer attempt to grab resources that are on a blocked tile.
- Fixed a bug that would cause farmers to stop farming entirely.
- Resources are now pushed out of the way if you attempt to build something on top of them.
- Added Children. They are not allowed to work, but will eventually grow into adult villagers. They inherit stats/experience from their parents when born.
- Hovering over "total population" on the top GUI now shows how many adults and children you have.
- Zooming added, you can now zoom between 1x and 8x zoom with the + and - key on your numpad. (Last build was locked at 3x)
- The interface GUI is now set to 2x scaling (Last build was 3x)
- Minimap colors rebalanced, and the minimap renders faster.
- Shadows generate much faster now.
- Lighting style changed, now more retro-like. Also renders faster.
- Created proper launcher files/executable for Windows, Mac and Linux.
- Patched a crash related to lighting values dropping below 0.
- Fixed a crash related to villagers trying to do mate related AI functions and their mate dies before the action is completed.
- Fixed a crash that would fire when a villager is starving to death and looking for food.
- Farmers now distribute food more evenly.
- Builders now build from first to last, not everything all at once.
- Many other tiny bug fixes and tweaks.

You can fetch the latest copy of the game here on IndieDB or on the official website.

Screenshots from the new build on a WIP map made by Dragonisser. 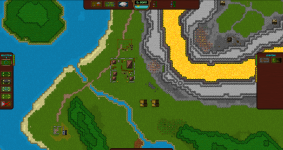 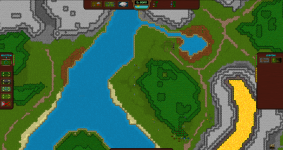 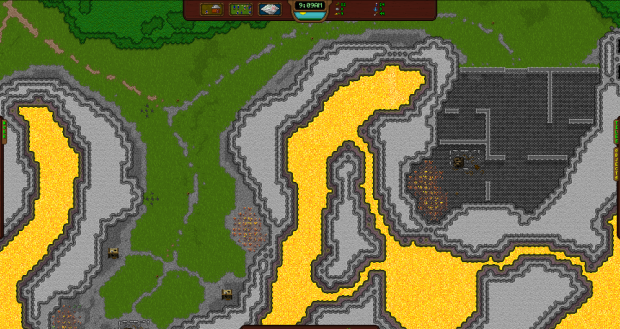