Updates to both the Beta and Demo

Both the beta and demo versions have quite a few changes and fixes, including: 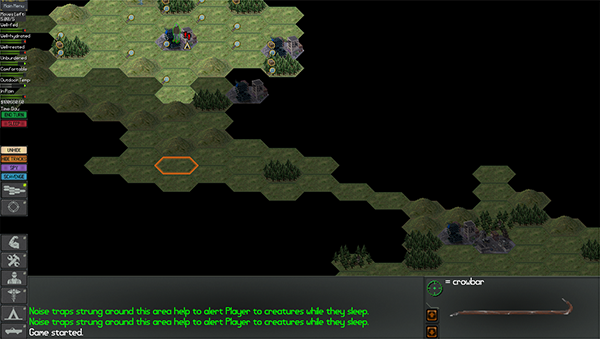 Memory optimizations should make the game more stable in games where much of the map has been explored.

One of the biggest changes in this build is the way memory is managed, particularly for items. Items should now use much less memory than before when not currently visible on the inventory screens. In practice, this should mean that the game is less likely to crash due to memory leaking as one explores more of the map.

In addition, several bugs in the crafting system have been fixed, which should reduce the number of cases where the game starts acting funny (clicking not registering, crafting failing, etc.).

Another major change to the game is the way creatures are spawned. When scavenging, creatures will no longer spawn in the same hex when the player's sneak check fails. Instead, the player is alerted that they might've attracted some attention. Any creatures close enough to hear/see the player's activity will head towards the hex to see what's up.

Additionally, the creatures most often seen in the early game are now bandits instead of the tougher raiders. They'll come in smaller groups, too.

And for early games where bad random loot drops combine with freezing weather, there will be some relief against unfair hypothermia.

The delete cursor is back! Now, if the player holds the 4 hotkey, they can rapidly delete items much like they would use them. Also, the mousehweel now changes attack modes.

Updates to the Beta

In addition to the changes above, the beta has the following updates:

Most of these changes are small tweaks and fixes. However, one bigger change involves primitive missiles. Now, primitive missiles can no longer be retrieved immediately after firing. Instead, those that miss will end up in an adjacent hex. If the missile hits, and it does enough cutting damage, it'll impale into the wound. Impaled missiles can be removed by the target, causing further wounding, or they will appear on the ground when the target dies. Blunt missiles, like stones, will simply disappear if they hit.

Overall, the above changes should make both the beta and demo smoother, more fair experiences. As always, if there are any troubles with the new builds, let me know!

Add groin as a targetable area =P nothing would slow me down like an arrow to the nads xD
I like the idea of having to search for arrows after missing, this is the same with spears?
As always keep up the good work =)

The "lower stomach" wound area may already be too close for comfort!

Spears and arrows should both work like that. The one difference is that spears cannot stick into body parts like the head (as it would look silly), and will disappear if they do. Otherwise, though, impale away!