Updates to both the Beta and Demo

Both the beta and demo builds include the following changes:

The biggest change will be familiar to those beta users who had early access to the 0.970t test build: the new crafting system. 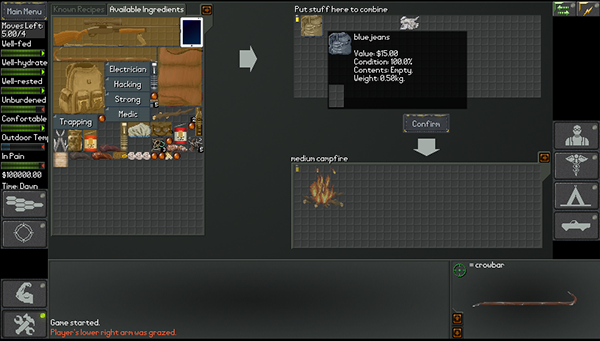 New Crafting System - based on item properties, and with caution highlighting.

In this new system, the recipes will accept any item that fulfills requirements, not just the ones I've specified by name. So if you're trying to make a torch, you can use more than just a stick and a dirty rag. Crowbars and wrenches will suffice for the handle, and any flexible, flammable sheet will work as a torch head. Similarly, fire can be kindled with plastic bags, paper, and even clothes, so you don't have to rely solely on twigs anymore.

Furthermore, the crafting UI will show you each possible outcome for your ingredients at the same time, and they can be seen using the arrow buttons above the yield box (similar to switching pages in the ingredients or quick recipe area). This way, ingredients with multiple outputs can be controlled by the player.

Another big difference is that items like berries, mushrooms, and pills are automatically identified by players with appropriate skills. Otherwise, they use generic names. No more crafting required to identify most objects.

Finally, the crafting system now has different crafting times for each recipe, so most crafting attempts should take less than one full move now.

Also, the skills page now has a "Random" button, which lets the game choose your starting skills and traits randomly.

Changes to the Beta

In addition to the above updates, the beta has the following changes:

Most of these are fixes to encounters that should improve their flow and logic. There's also one bug fix which might solve issues with acid rain/heat stroke bugs after loading a saved game.

As always, if there are any issues that arise with the new builds, let me know on the forums. I'll do my best to fix bugs as they are discovered.Hope you enjoy the new builds!

Not seeing the option to update my game on Desura

nvrmind. Got it to update.

Yeah, the timing can sometimes be a bit laggy between news and new builds. Usually, they get sorted out within 24 hours, though!

These are some great changes to the crafting part of the game. The way we can now use more than one type of item to fill a similar role sounds more realistic and i'm going to enjoy trying it out.

What bugged me about crafting was that if i ran out of turns while crafting i would have to go back to the map screen to 'end turn' before returning to the crafting screen to continue crafting items!
Is this affected by the new "Changed crafting to deduct turns based on recipe, instead of always 1.0 turns" fix?

The crafting and running out of turns is still an issue, though the recipes take less time each, so it should happen less often. There still isn't a way to end turns from within the crafting screen.

Re: dropping items in camp, that's still an issue, too. Though, does that come up often? The situation that I can think of is when I first arrive to a camp. I usually want to drop my sleeping bag, noise traps, etc. But that's a once-per-night thing, so it never annoyed me. Are there other items you're frequently moving between camp and hands/backpack?

What'd be nice is companions, or atleast some friendly NPC's. It's a bit hard to believe EVERYBODY is out to kill me.

I agree. They're actually on my wishlist, too. I'm not sure if I'll have time for a full companion system, but I do plan on adding some neutral and friendly wandering creatures. They may not offer much in terms of conversation, but at least they'll leave you alone, offer more targets to hostiles, and sometimes ally with you in a fight.

The other thing I'm looking into is non-lethal battle outcomes. Surrender, and looting unconscious creatures should change combat a bit, since it won't always be necessary to murder a creature to end the fight.