Himeko Sutori has officially entered closed beta testing as Kickstarter backers try out a test campaign containing 3 hours of play time. This beta build contains not only the test campaign, but also a fully functional editor with assets and instructions for making your own adventures.

We have been adding tons of new content and polish, plus some desired features as we head into closed beta testing. We have finally nailed down the look of the game, with cartoonish 3D backgrounds that we hope match the 2D sprite characters. We have added new meshes, materials, and particle effects to reinforce that look. And the editor gives you a chance to take a close look at each one to see how they all work, and then create your own versions to share in your own Himeko Sutori adventures.

Starting off, we can take a closer look at that water shader.

You just take our water material, place it on a landscape, and then shape the water exactly the same way you would shape the land. It automatically flows downhill in 8 directions and switches to a waterfall when it becomes steep. It reflects the color of the sun and sky, simulates waves and distortion, and it's ready to use immediately. If you want to get a close look at how it works... 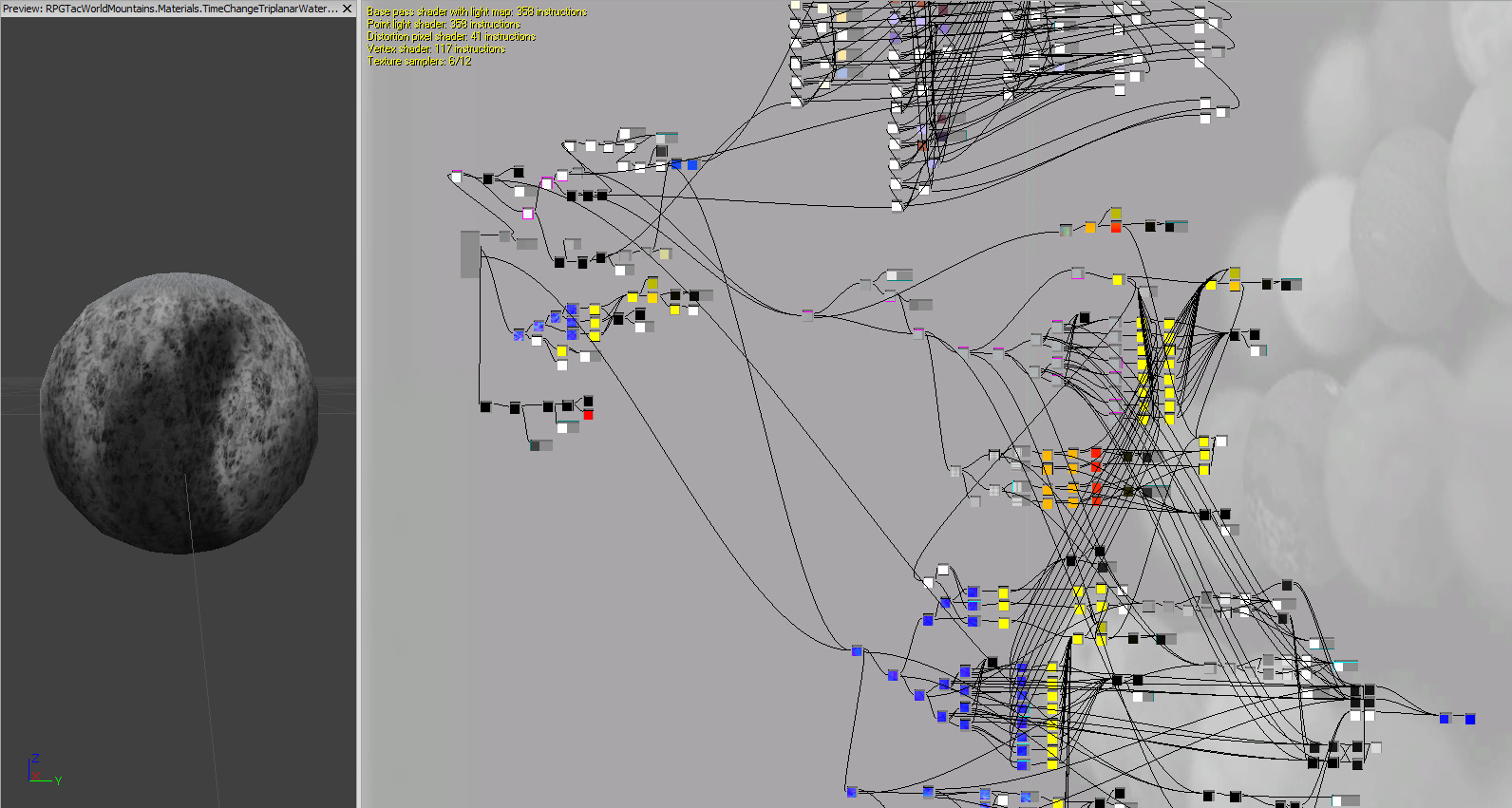 You can zoom in as much as you want in the editor.

We also added some mountain meshes that we use in-game and let you use in the editor. 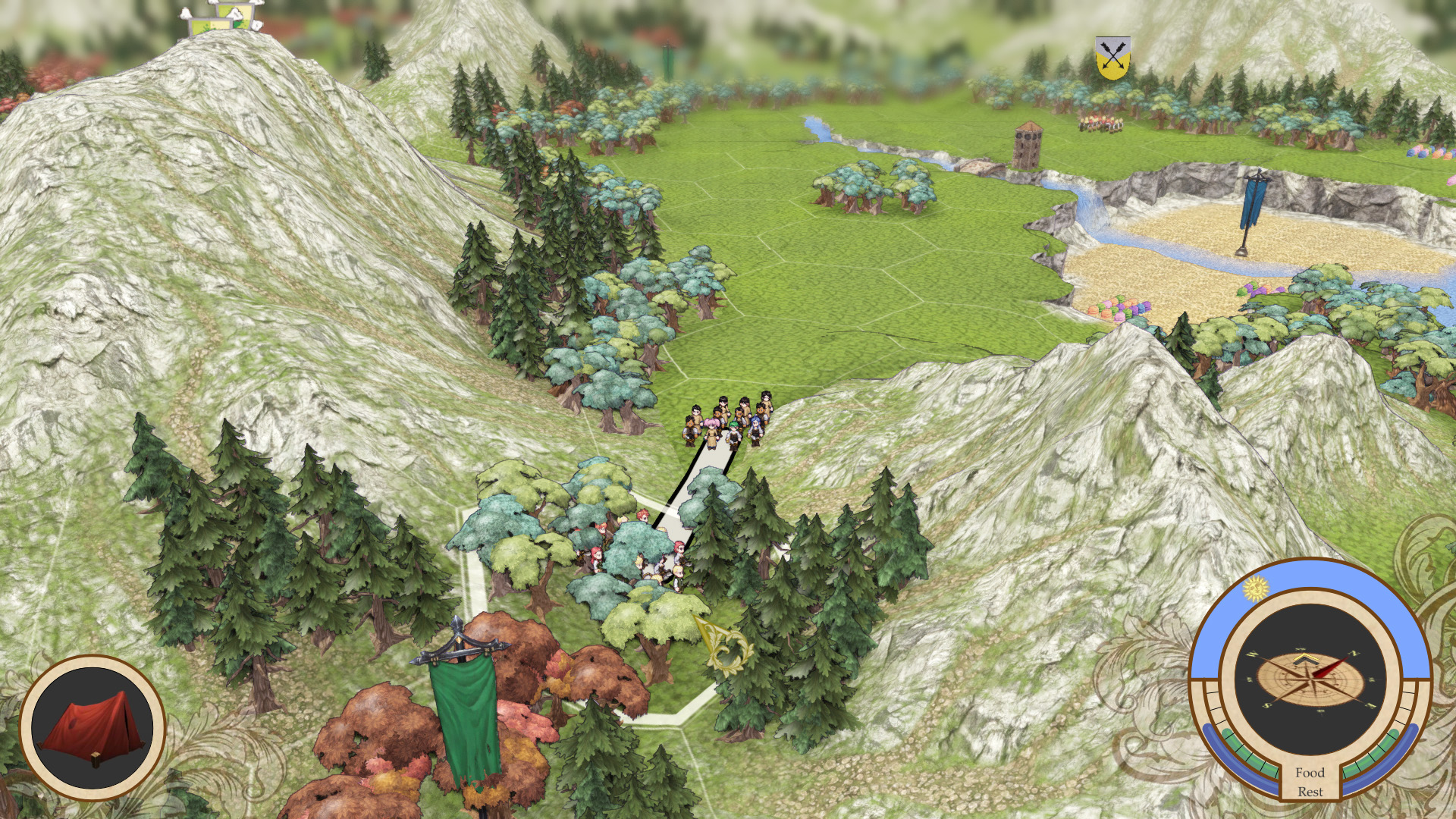 With just a few meshes, that you can rotate and scale (and the texture density remains the same, so it blends in regardless of size), you can make a stunning variety of maps. Also shown here is the game engine's dynamic depth-of-field blur, an artistic decision that we think also helps keep your focus on the action.

We have a template all set up in World Machine, so if anyone wants some more mountains, we can add them pretty easily. 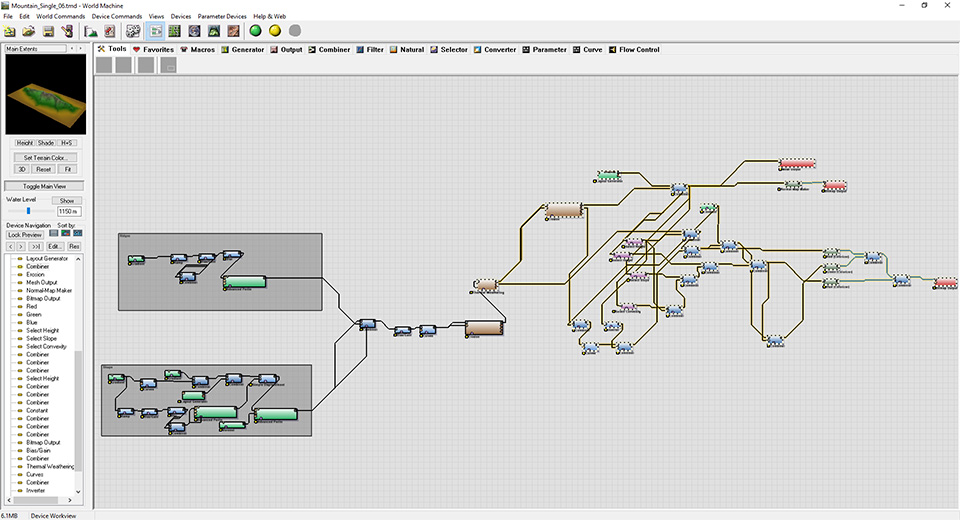 We also replaced all of the combat particle effects, using some techniques that we learned from the amazing DucVu FX. His work was a huge help to us and we gladly recommend him here. (And for $1 on Patreon you can get access to his After Effects and Photoshop files.)

Here are a few of the new effects we added:

We also reworked one of the most iconic effects of our game, the Sobel edge shader. We started off with a thick black outline that frankly looked really amateur. We later replaced it with a thin line tinted the scene's shadow color. During the day you had a purple line, at sunrise and sunset you had a red line, and at night you had a dark blue line. We weren't in love with that either. Then we did this: 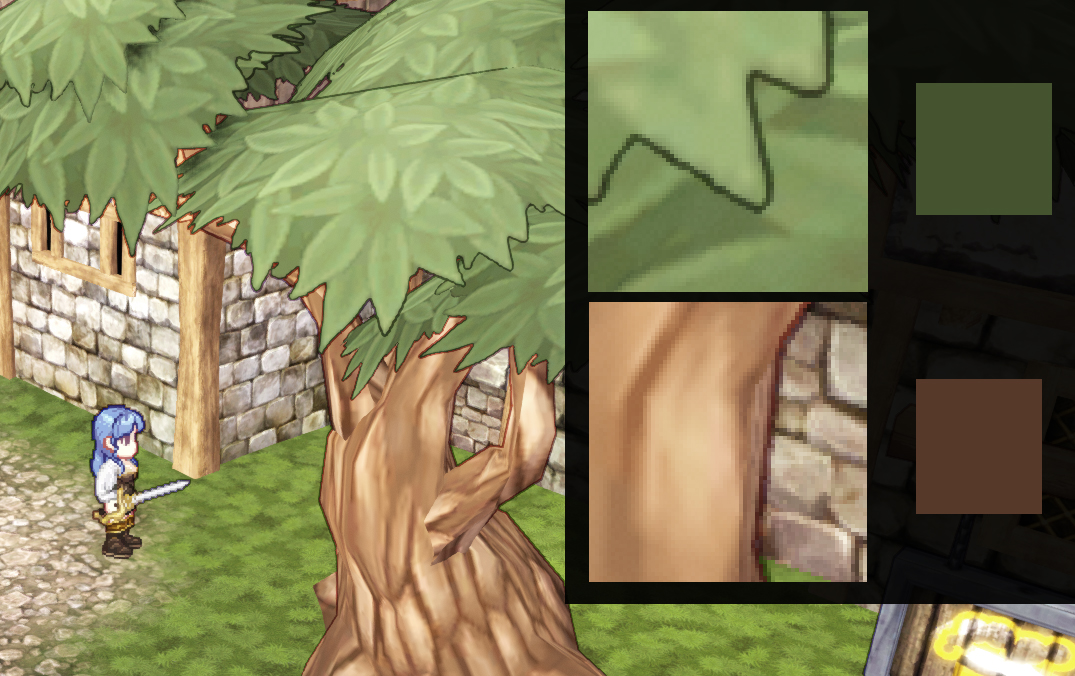 We take the pixel color, normalize it (so if you think of the RGB channels as a 3D vector, make that vector length 1, so you have the same color, but total brightness is 1), multiply the original pixel color by the normalized color, and you end up with a saturated version of the original color. Now multiply by the shadow color, and you don't just have a purple line over everything, but you have a darker, more saturated color of the pixel, that's pushed toward the color of the scene's shadows the same way everything else is: by multiplying the color.

We've been creating some very detailed towns and other locations to explore. And we have to make sure they all look good under different lighting conditions. 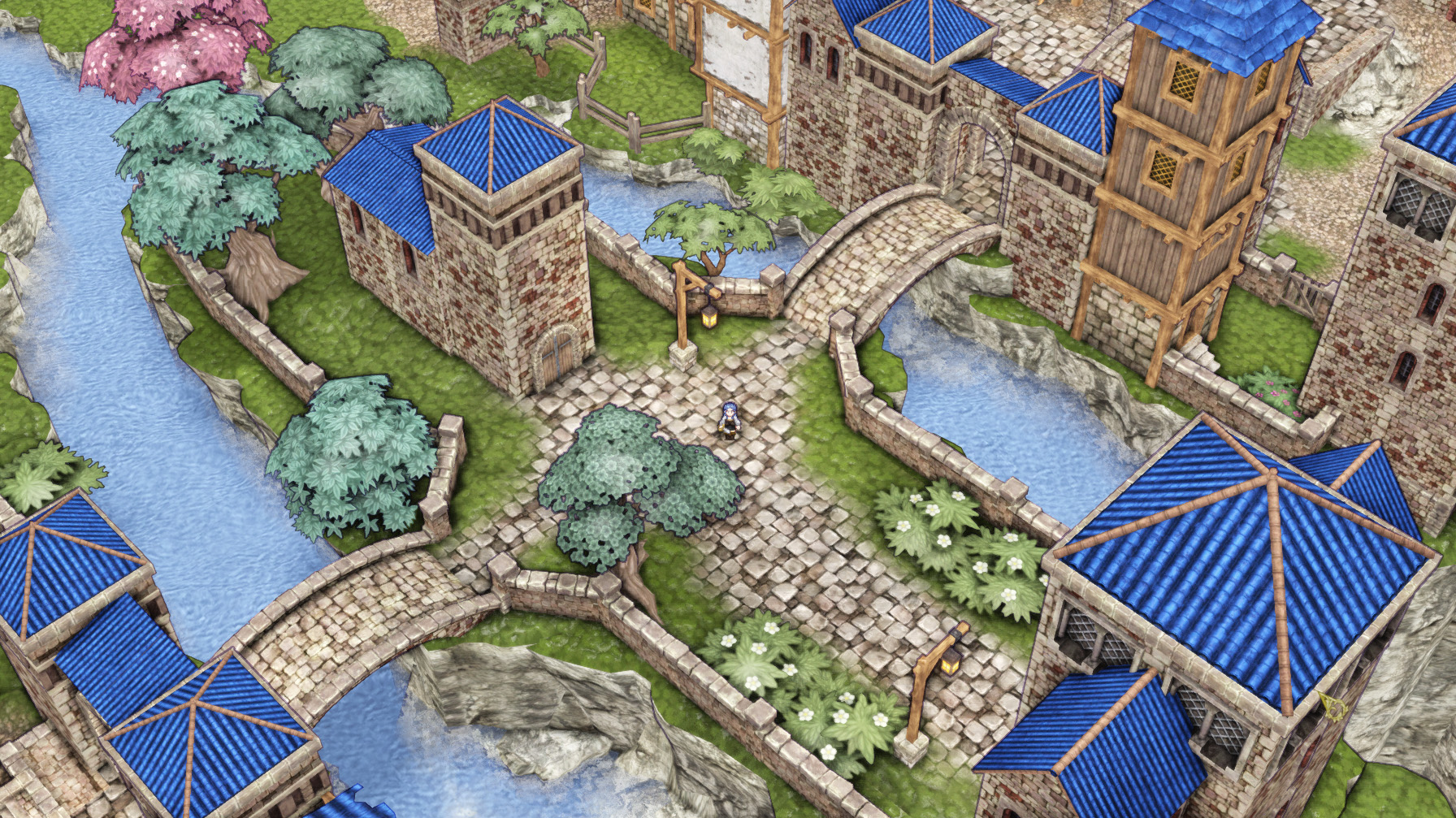 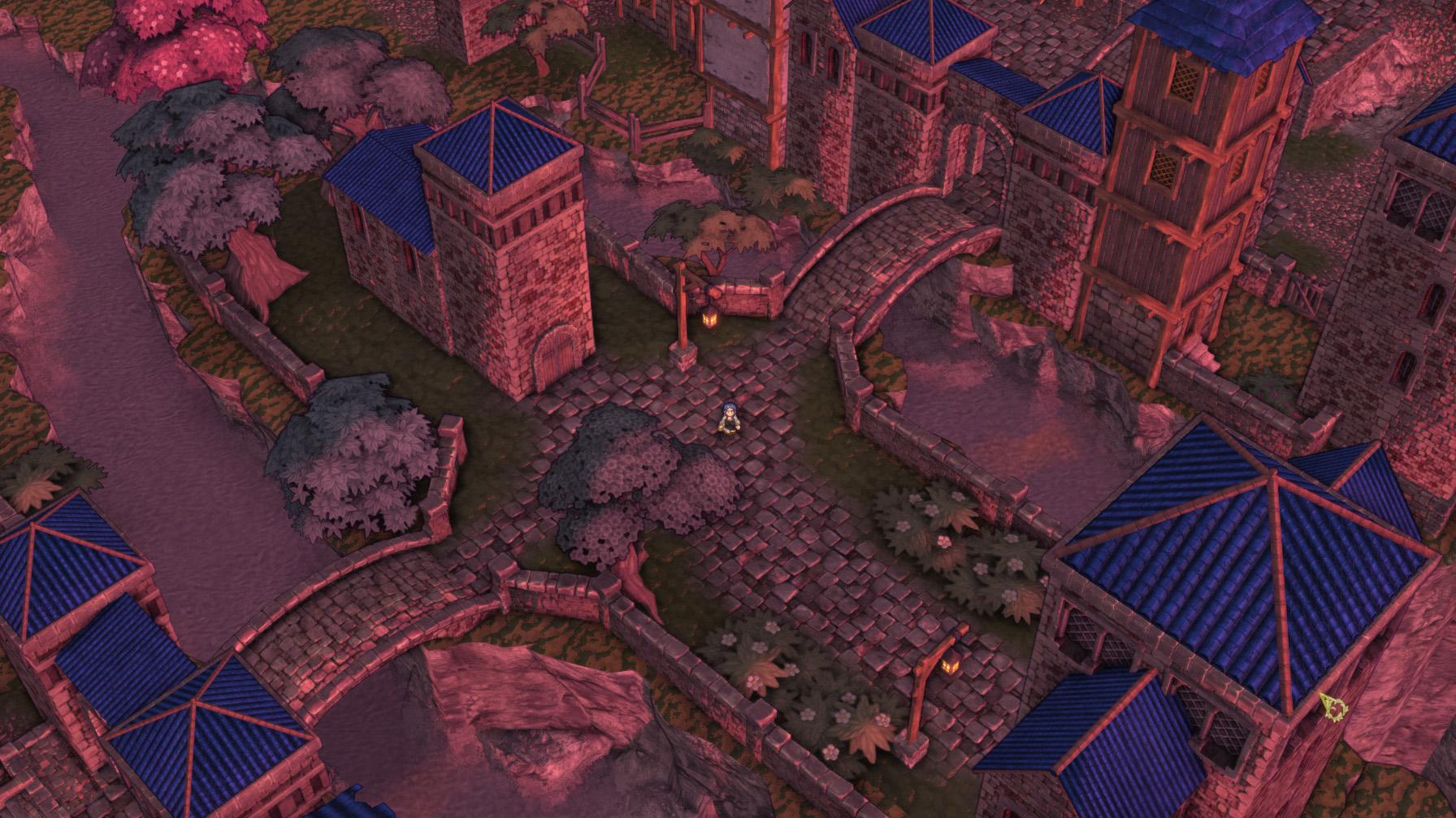 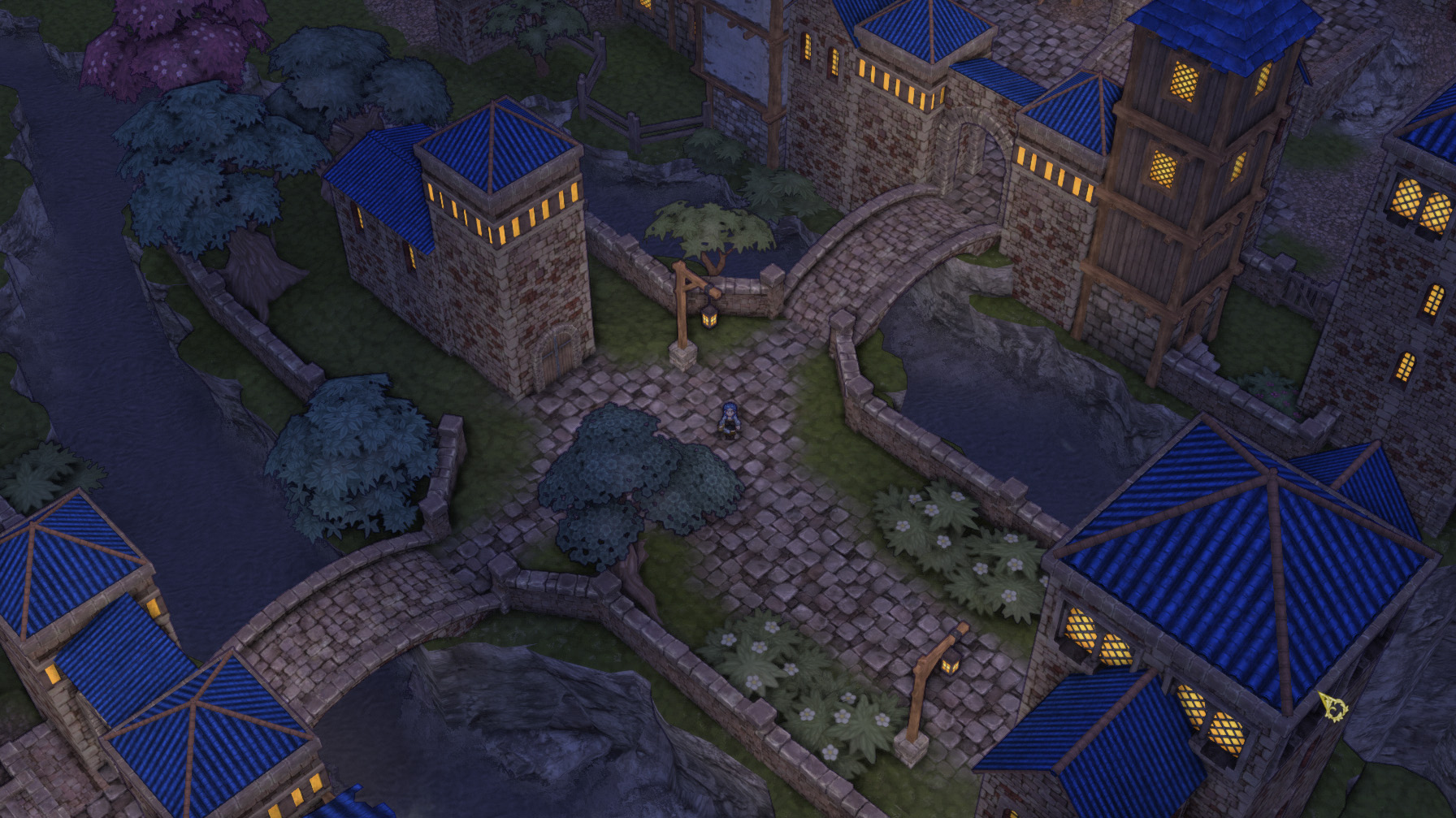 And we've been working on entirely new settings to make Himeko Sutori an epic world-spanning adventure.

And adding those assets was no small feat. These models and most of the textures started life at the Unity Asset Store. We put them into Blender, redid a bunch of bad UVs, made custom collision meshes, vertex painted them, then made custom materials in the engine. In addition to our usual shader that changes color with time of day, we added wind direction, to make the fabric and branches move in waves with the wind, going up and down and stretching slightly in the XY plane. The red vertex color, multiplied by wind strength, tells the mesh how far to move. The blue vertex color tells the mesh if it has to stop moving downward at a certain point, so the fabric meshes don't drop below the wooden frames. It looks really good in close-up, like it's a physics simulation and not just shader instructions.

We also added some code and shader magic to aid with navigating a 3D world with a faraway third-person camera:

Now there's no more losing your character behind buildings or having your camera clip into everything. We also gave all of the meshes a variable that lets you decide whether or not to swap to the translucent material. That way, you don't have thin items like trees and lampposts constantly disappearing. 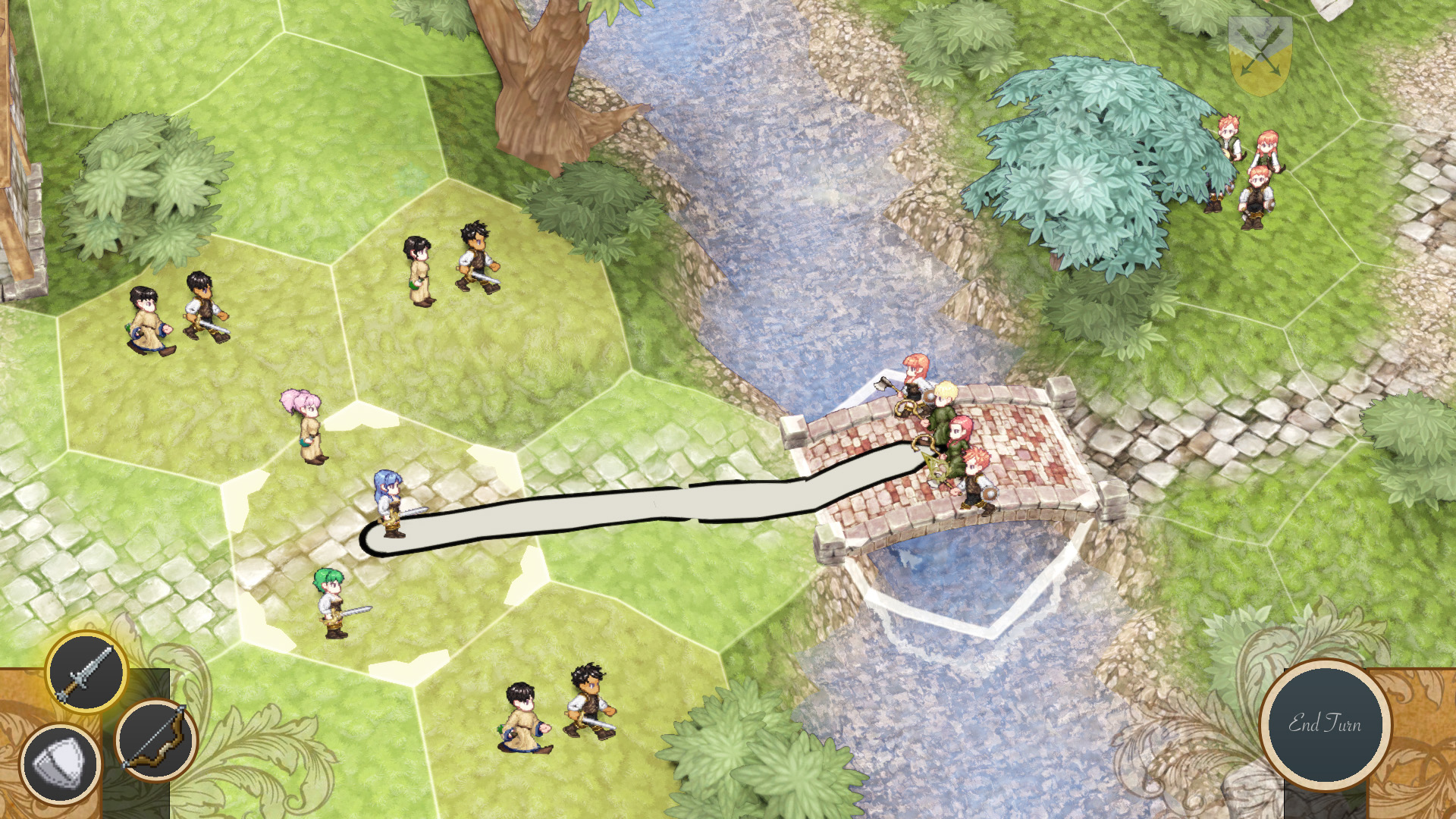 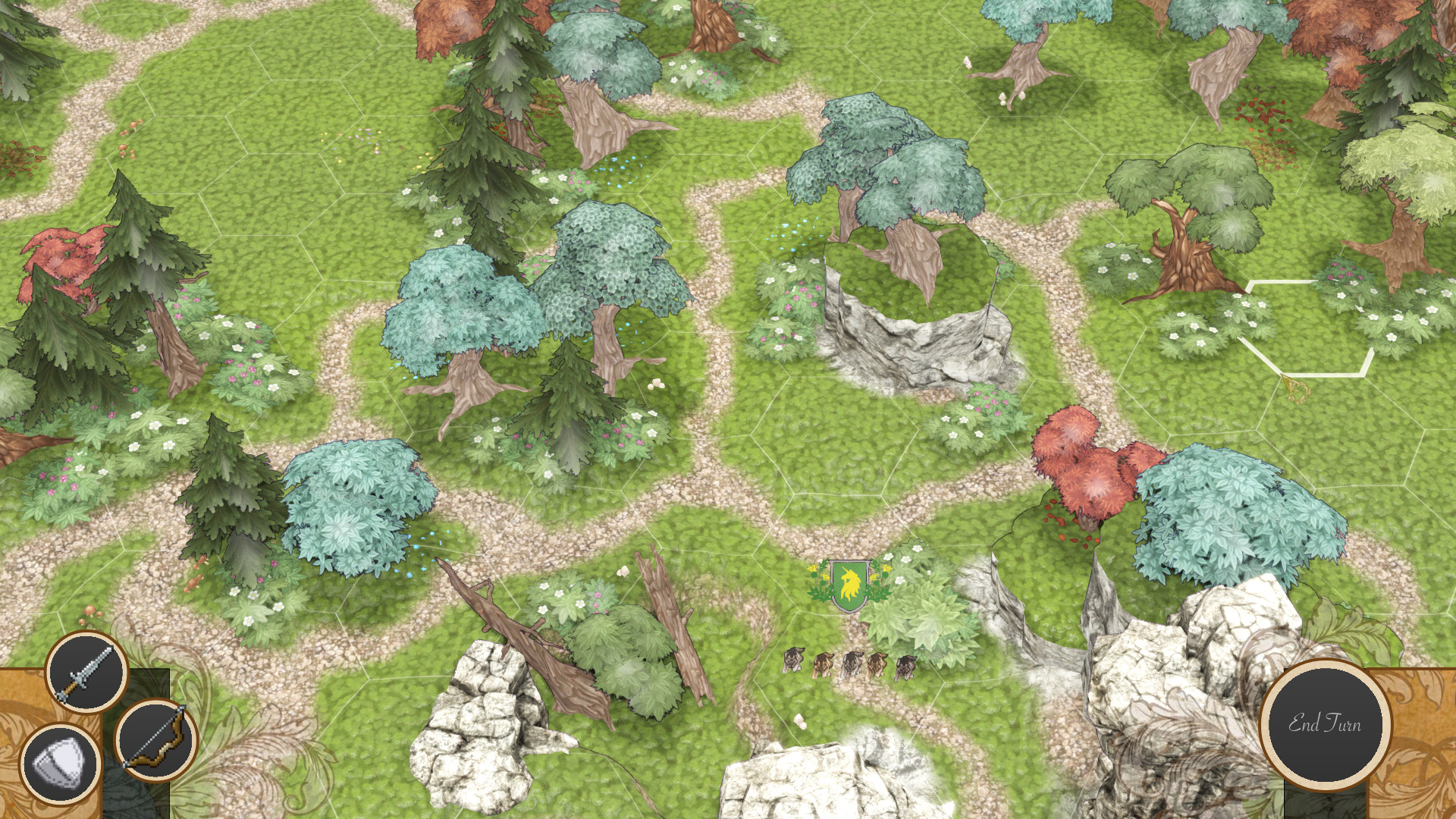 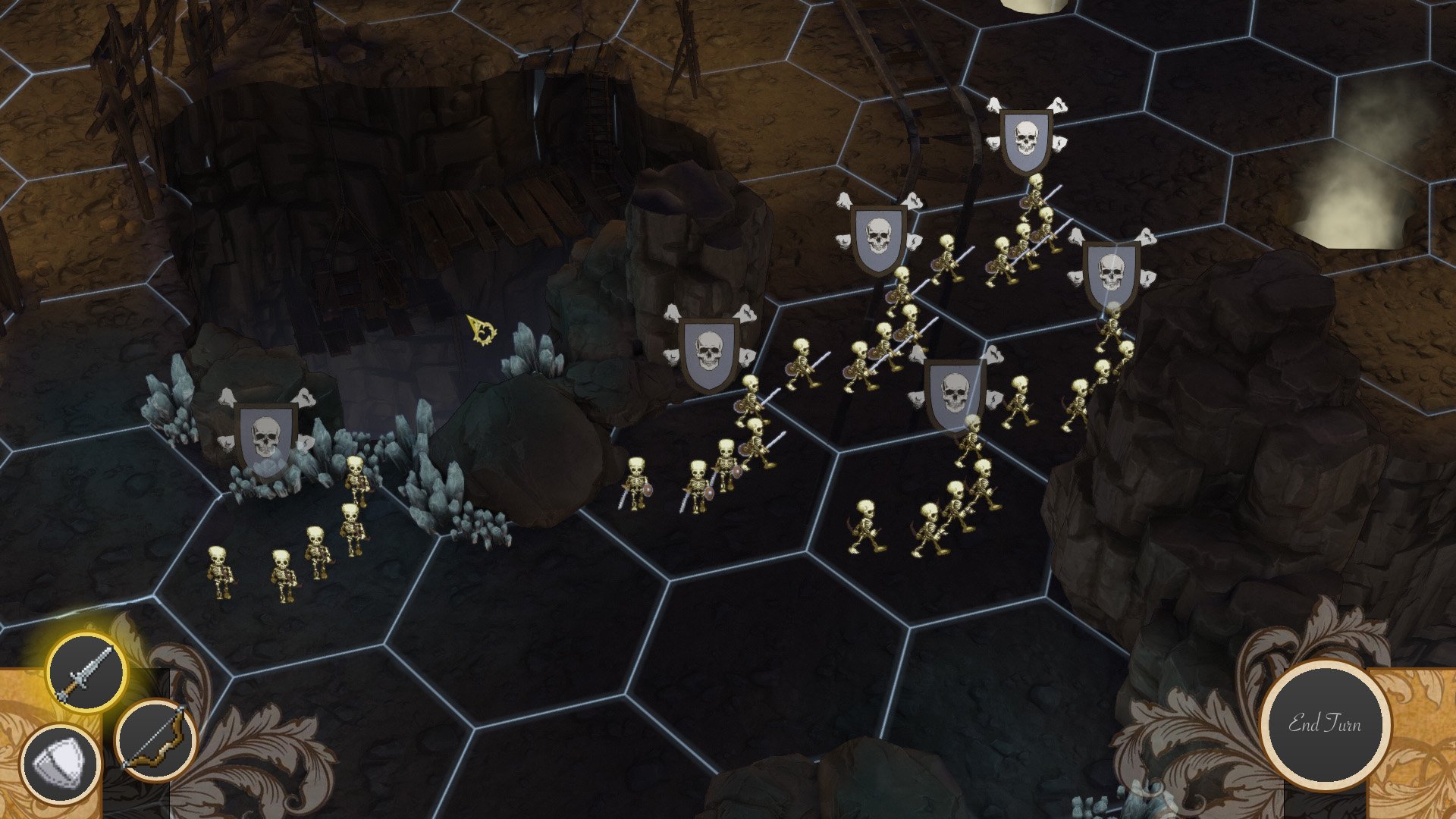 And we've been adding tutorials, both in-game... 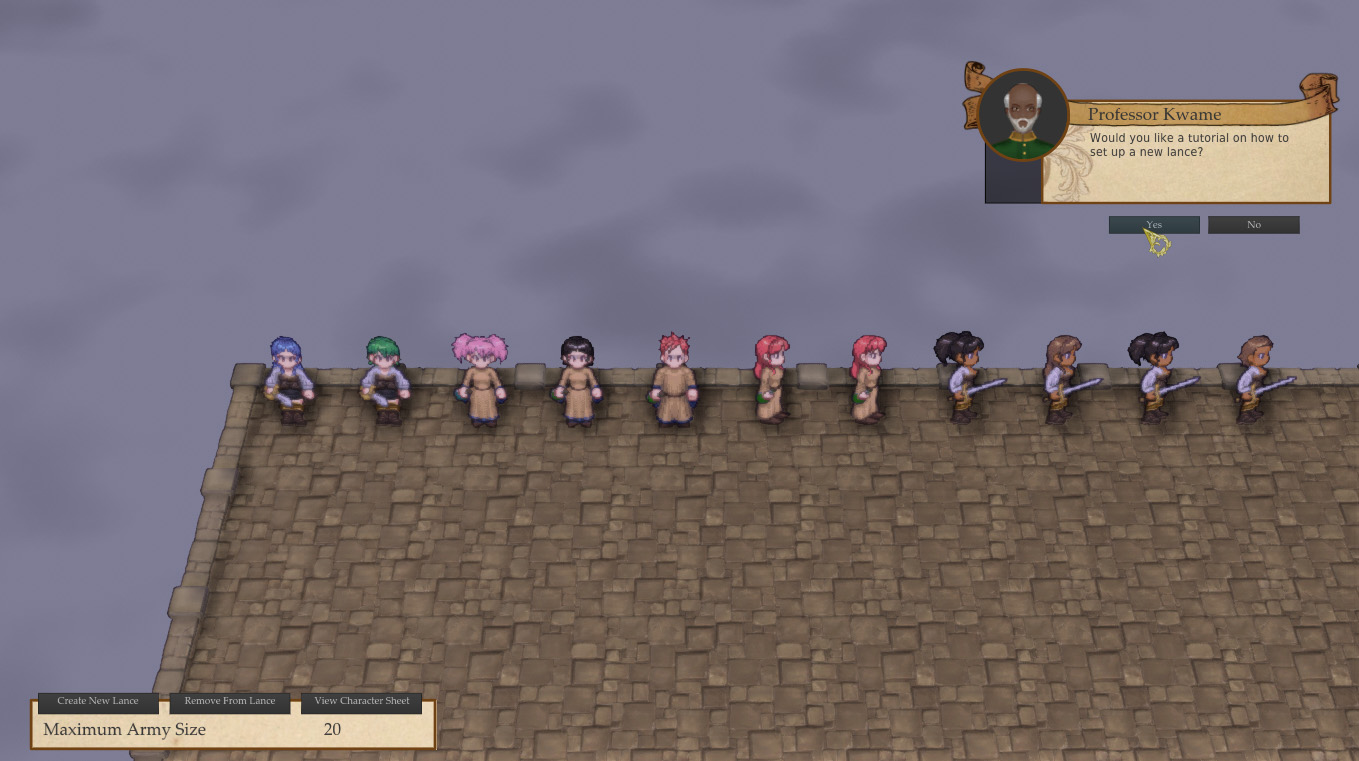 And online, to help you make your own campaigns. 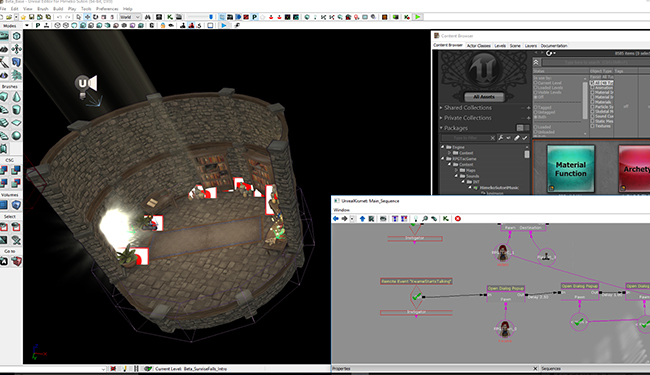 All in all, we think we're in good shape heading into the closed beta test. And with this foundation laid, we are ready to start working on the main campaign of Himeko Sutori.