Post news RSS New Alpha copy of the game is up!

I just released the next and final alpha for the game Ion Galactic: The Conflict. I added a few extra features that didn’t make it into the last Alpha.

Try out the new (and final!) ALPHA here: Akpco.net
I just released the next and final alpha for the game Ion Galactic: The Conflict. I added a few extra features that didn’t make it into the last Alpha.

>Two Hundred pre made Boards!
There are 200 boards included in this alpha! They are broken into two groups: 100 smaller boards and 100 larger boards. 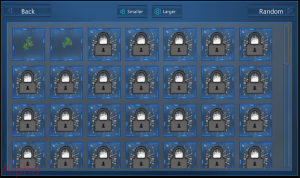 >Random Boards
The game will now create boards on demand! You can create smaller or larger boards and further define the board difficulty and included nebula if desired. So that’s 200 boards + unlimited random boards.

>WIP Insurrection Campaign
I’m working on the included campaign. However, the tutorial campaign that I started is now complete. You can play through all the tutorial missions and get a feel for the game before diving into the more complicated challenge games.

>AI difficulty settings
Although the buttons existed in the previous Alpha, they didn’t work. Now you can configure the desired difficulty offered by the AI. You can set the AI difficulty per computer player. So mixing some harder AI’s with some easier AI’s is a good way to gradually increase the difficulty of the game. 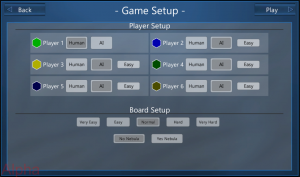 >Board construction settings
With the inclusion of AI difficulty settings and the ability to change how easy or hard the initial layout of the board is one can create some very easy and some very hard situations. I encourage you to try and beat a board with the hardest AI and the most difficult board layout. Without cheating it may not be possible.

Try out the new (and final!) ALPHA here: Akpco.net