Last day of the Neofeud sale is Monday! One week into Steam release I am happy so far with the reception and press of Neofeud, which has been a magnitude greater than the initial Itch.io release in March. Check out some of the reviews within the article. And if any Twitch Streamers or Youtubers are interested, I'd be happy to help promote your stream of Neofeud, as well as make a "special appearance" in your stream as the game's developer!

So first up, Neofeud has just been released to Steam this past week, and the last day of the Steam sale is Monday. So if you haven't picked it up yet, now is a great time! 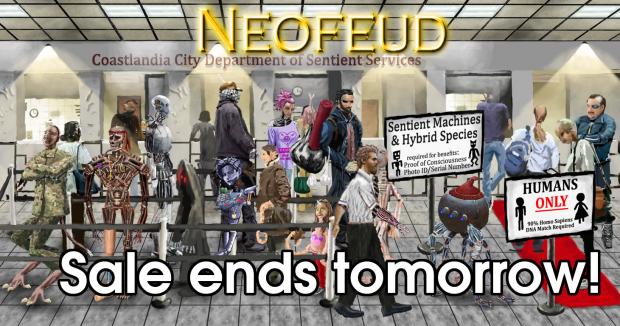 I am happy so far with the reception and press of Neofeud thus far, which has been a magnitude greater than the initial Itch.io release in March. Here are some of the recent Neofeud reviews published this week:

Here are some of the recent reviews that have come in for Neofeud:

"This is an ambitious, atmospheric cyberpunk scenario and essentially the work of a single person (voice acting excluded). Oh, and it might also be one of the best adventure games I have played in a while, so there's that."

Granted, a lot of this is "just" good cyberpunk in the vein of Gibson, Dick, and Stephenson. However, the world building is something else. It has a thickness, a density to it. Almost every line of the game's technobabble fleshes out the game world some more. If that's your thing, the game is immensely enjoyable."

"I did not know what to expect going into Neofeud, but I came out excited to see what’s next for Silver Spook Games. The game has more than the surface indicates, which I loved. It offers social commentary, much like its many influences, but successfully stands on its own.

In the end, the art, gameplay, music and story come together to deliver a solid game. Check it out if you are looking for something different and cerebral."

"I love how the game has many humorous references to well known movies, like Hasta La Vista from Terminator or the song War by Edwin Starr, used in Rush Hour. But Neofeud also shows how terribly ridiculous our bureaucracy system works. Or better said; does not work at all. Forms, tests, procedures, all working against each other without any result whatsoever.

Neofeud is developed by just one man. Especially when you keep that in mind, I think the game looks good and definitely has its own signature look. The background is hand drawn, while buildings and characters are designed in a comic style. The point-and-click mechanism works great and the developer wanted to offer players more than just a fun game." 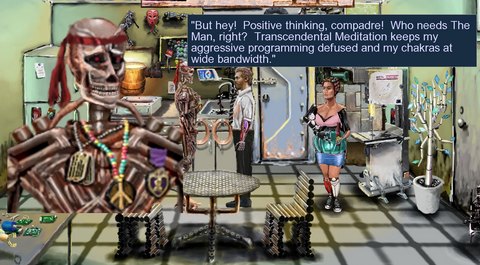 Though there's been some good pretty good buzz for the initial release, Neofeud can always use more word of mouth as I remain an indie developer without a publisher! If you are a Twitch Streamer or Youtuber, or an indie game journalist, please get in contact with me! I would be happy to retweet and share your stream, and I'd be happy to even make a "special appearance" as the developer of the game in your Twitch Stream while you're playing to hang out, chat, and even throw out some hints. ;)