Thanks for everyone's help with the Cyborgs balances

Thanks for everyone's help with the Cyborgs balances 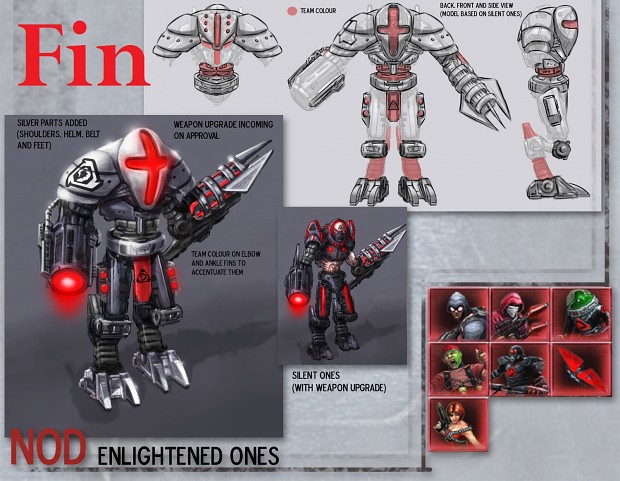 After I read your comments and put a lot of thought and testing into it I decided to change the following:

and uncrushable by tier 1 units

Since that how many expected them to be like, they heavy elite infantry and not the other way around, they do need some balance aside from their uniqueness though and that why they was mostly left untouched in terms of speed, damage, and armor, and since one of the new unit I added (The War Reckoner ) can garrison them and still let them shoot from inside Without the need to be deployed as a bunker, I think that even as "Supportive" units they can still kick the enemies with this unit combination, plus they now twice the annoying since they can give hard times to tier 1 tanks which can't crush them anymore (unless you Nod and you used your Dozer upgrade).

The Awakened's Minigun damage increased from 18 to 25 since it kick tier 1 infantries anyway and needed the additional damage to be more effective against tanks, you can see them as a mini tanks inf now ;), they still not super powerful though and neen to be in numbers, but the result will be more rewarding then how it was in v1.02. (I still play with both cyborgs damage in order to find the best balance)


As for the mind control thing... it may make you feel bad but I decided to give up on the mind control resistant, for balance reasons and since Scrin have good Excuse/Back-story as well
(Scrin's biology and technology is so above humanities and cyborgs not robots but rather half humans and half robots) (Again credit to ErastusMercy... and EA for making such excuse xD)


Plus I don't recall that cyborgs had resistant to mind control to begin with in TS... I don't remember any unit that could use mind control in the Tiberium's universe before KW (aside from the Red alert universe.. which not really related to this subject xD)

So that mostly what I decided,

Let me know what you think in the commits below

well..... I actually dont use marked of kane,so you can say I wont be using these cyborgs anyways :P

Marked of Kane is my favorite Nod faction. Definitely glad to see a buff to them. =)