As mentioned in the past two articles, we were hard at work preparing the first public demo build of Nauticalith. We showed it to a wonderful crowd at Playcrafting Boston's Winter Expo. Alongside us were the other current projects we're producing as Glass Knuckle Games. Thief Town, which is currently updating with all new content and features, and Defragmented, which is also in Alpha.

Above is a quick look at some of the closer visual elements currently in the game. An all-new lantern fuel bar accompanies some nice lighting effects - especially in the dark of night.

Aside from just the lantern UI update, we've been working on constantly improving the UI overall. Now, we have some nicer looking UI elements to match our more unique atmosphere. There's still a long ways to go, but each update is looking better then the last!

To accompany the UI changes, we have dynamic element displays. Instead of showing the entire UI and detracting from the glorious views ahead, only certain elements display at a time. Depending on what you're doing or what recent milestone each bar has reached, they will dynamically show and hide themselves. Of course, the player still has the option to display the entire UI at once. 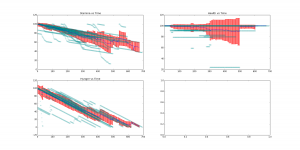 The last thing we have to share this week is much more data-driven. Logan hinted at some advanced data collection and visualization that he was working on leading up to our public demos. Now, when users play the game, we can easily visualize what choices they make and how much difficulty they are having across a variety of game aspects. Above are just three graphs of many that help us determine what pieces of the game need the most attention.

Although we've just finished our first public demo, we have another right on the horizon. Mass Digi is hosting it's annual Made in MA Pre-PAX Party at the Microsoft Nerd center on Thursday, March 5th. We'll be buy fixing bugs and adding general polish to the game over the next week to prepare for that event. Hope to see some of you there!