NAM:WAW v2.51 has been released adding a huge amount of updates to the mod.

[THIS DOWNLOAD INCLUDES NAM:WAW v2.51 AND THE 5 UPDATED MAPS LISTED BELOW]

Codutility is proud to release the NAM:WAW 2.51 version of this awesome mod.
***Now working with Linux debian "lenny"
***IWD has been replaced form version 2.5 to resolve the "silenced CAR-15 invulnerable" bug , Thanks to buschrun and his crew for pointing it out and help testing:) 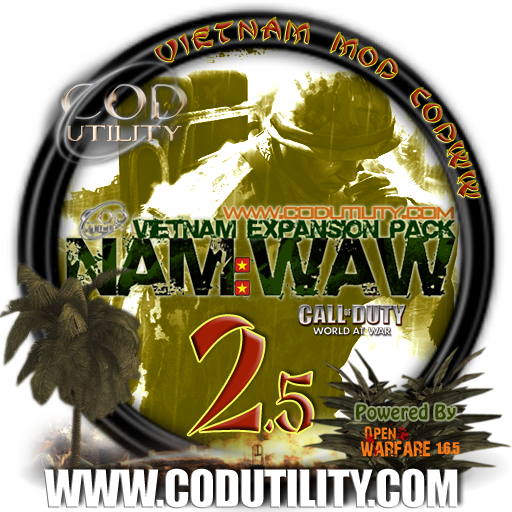 First off take a second to give thanks to those that were a big help to us in our very first cod mod.

HolyMoly - Thanks for the patience and pointing me in the right direction as I tried to get a grip on this stuff, # one m8 and for giving us our first weapons from which everything else has come.

Traustic - For expalining things and pointing to the programs we needed to do certain things.

Demonseed - For offering to help on more than one ocassion and supporting NAMWAW by getting the word about it out there, thanks m8.

Dr.Evil - For testing the mod on Debian Lenny and Unbuntu servers. Thanks m8 could not have fixed ti with out your help.

To the Openwarfare crew - You guys have given so much for so little(nothing really:) and least we can do is say thanks on behalf of us and the communtiy as a whole.

OW will remain one of if not the coolest thing to come out of the COD community since it began... Bravo.

To install the mod client side:

First browse your PC to my computer. At the top click on Tools/Folder Options, then the View tab and make sure "show hidden files and folders is checked.

XP users, place the mod folder in: Documents and Settingsyour_pc_nameLocal SettingsApplication DataActivisionCoDWaWmods
If this folder doesn't exist, just create it.

Vista users, place the map folder in: Usersyour_pc_nameAppDataLocalActivisionCoDWaWmods
If this folder doesn't exist, just create it.

To install the mod on a dedicated server plz visit www.codutility.com for instructions.There are to many different server setups to cover them all here.

To test a map:

XP users, place the map folder in: Documents and Settingsyour_pc_nameLocal SettingsApplication DataActivisionCoDWaWusermaps
If this folder doesn't exist, just create it.

Vista users, place the map folder in: Usersyour_pc_nameAppDataLocalActivisionCoDWaWusermaps
If this folder doesn't exist, just create it. 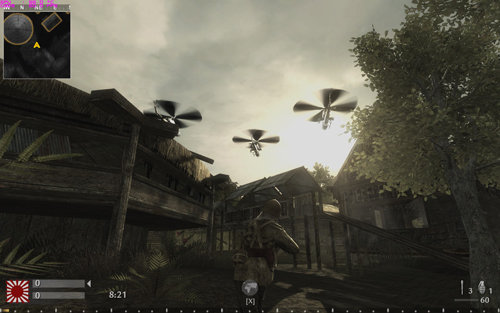 Allow players to disarm/retrieve explosives from the map
Control whether tracer bullets should be used when firing weapons
Shows real time statistics (accuracy, k/d ratio, longest shot, etc) to the player in the top right corner of the screen
Control if the player should drop the weapon when he/she takes damage


If enabled, player will only be able to edit the characters appearance on their first spawn

ADDED 4 new gametypes for a total of 16( thanks to Openwarfare ): 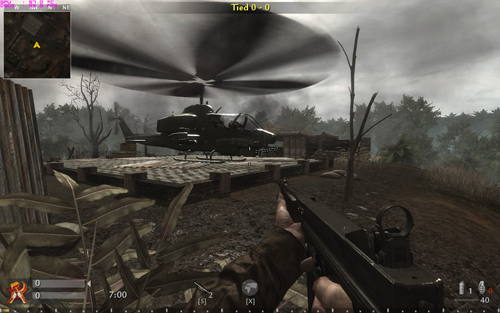 - CHG: Changed the AMVS to allow a player to leave the server during the map voting process.
- CHG: Removed scr_visual_mover_random_config dvar.
- CHG: Added a new variable to the visual mover to supply the game with how many configurations
a map and its corresponding gametype have.
- CHG: All visual mover configuration (item) dvars will now have a "_<#>" at the end
starting at 0 or 1.
- CHG: For visual mover blank or " " dvars are no longer needed for each configuration.
- CHG: Moved some dvars from the mover.cfg to all the mover/gametype folders. Provided descriptions
of these variables and examples for each gametype.
- CHG: Removed the old mover written by BionicNipple.
- CHG: The head model for the VIP player in Assassination will change now.
- CHG: New option added in S&D to still show both bomb sites to the defenders even when one has
been disabled.
- CHG: Re-aligned the images on the map loading screen and replaced the default clanlogo.iwi image.
- CHG: Reduced number of image resources (2 sponsor logos were removed and simplified the health bar
image)
- CHG: All the server variables will reset now on ruleset activation or deactivation.
- CHG: More than one life can now be set for LMS and LTS.
- CHG: Added logging capabilities to the Advanced Map Voting System.
- CHG: Added new option in Retrieval to control the auto reset time of objectives.
- CHG: Added new master variable for Admin GUIDs so they need to be entered only
once.
- CHG: Added distance traveled statistic to real time statistics as well as the
end of game statistics.
- CHG: Added variable to control public matches where the server password missing
and the /record match reminders will not be shown.
- CHG: When the blackscreen is enabled for spectators the screen will automatically
be active also when a gametype with number of lives is being played and the
player has used all the available lives.
- CHG: A non-pistol weapon can also be forced on the VIP now in Assassination.
- CHG: The player destroying the bomb in Search & Destroy will receive a "defuse"
score.
- CHG: Added a timer to CAP so players only have x amount of seconds in the interface
- Added player protection while in CAP Interface
- Text for CAP now shows for as long as CAP is available