Early Access is going well so far. I've added six maps, a new game mode, and a new skill in August. In addition, I was able to fix a couple of bugs, including one that has puzzled me for a long time. Let's have a closer look.

Camp Doloris is a rocky slope dotted with small transformers. The challenge is to skillfully guide the spiders and let them die at the right moment so that the transformers can reap the power. It's very satisfying when it works. 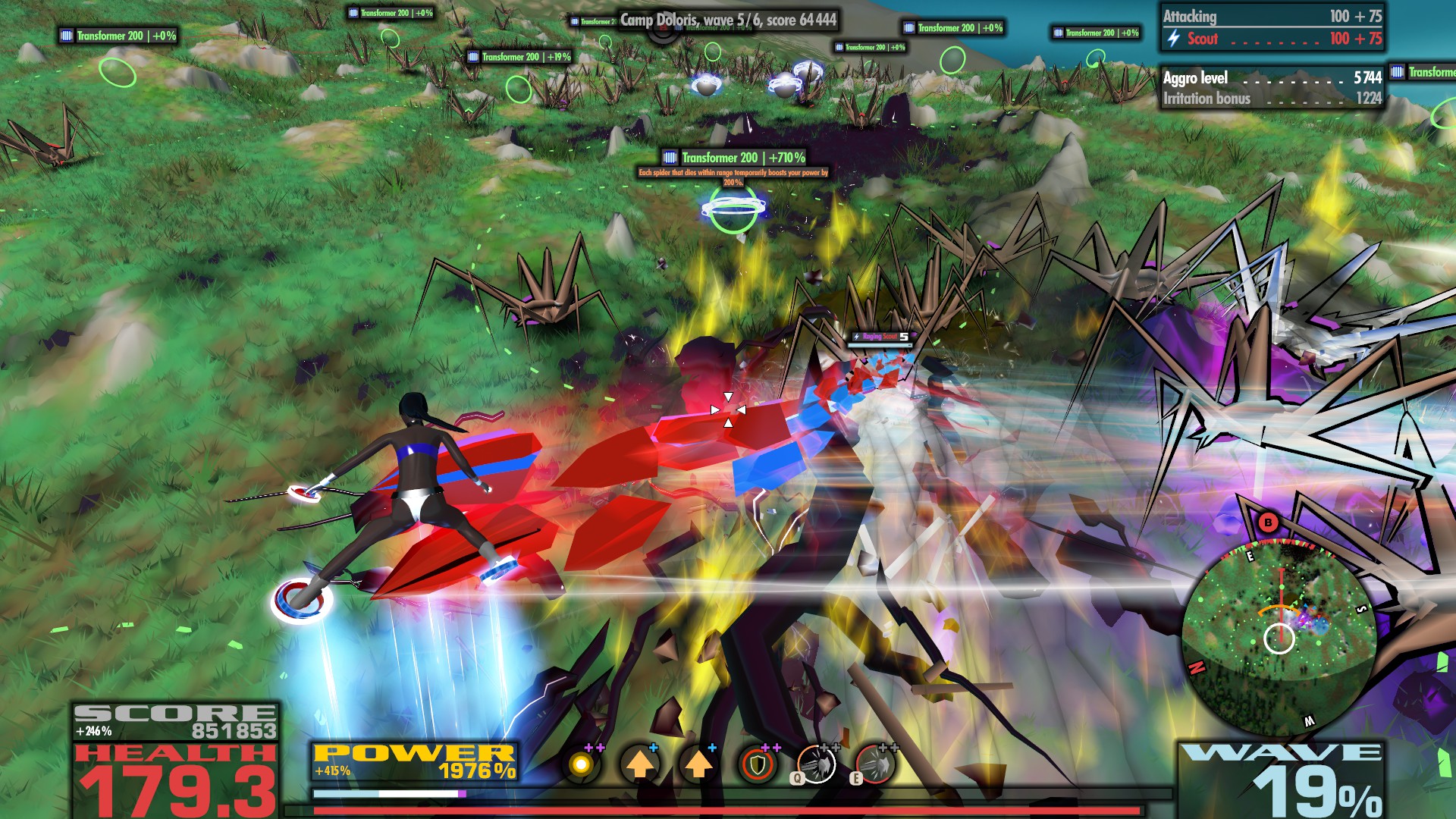 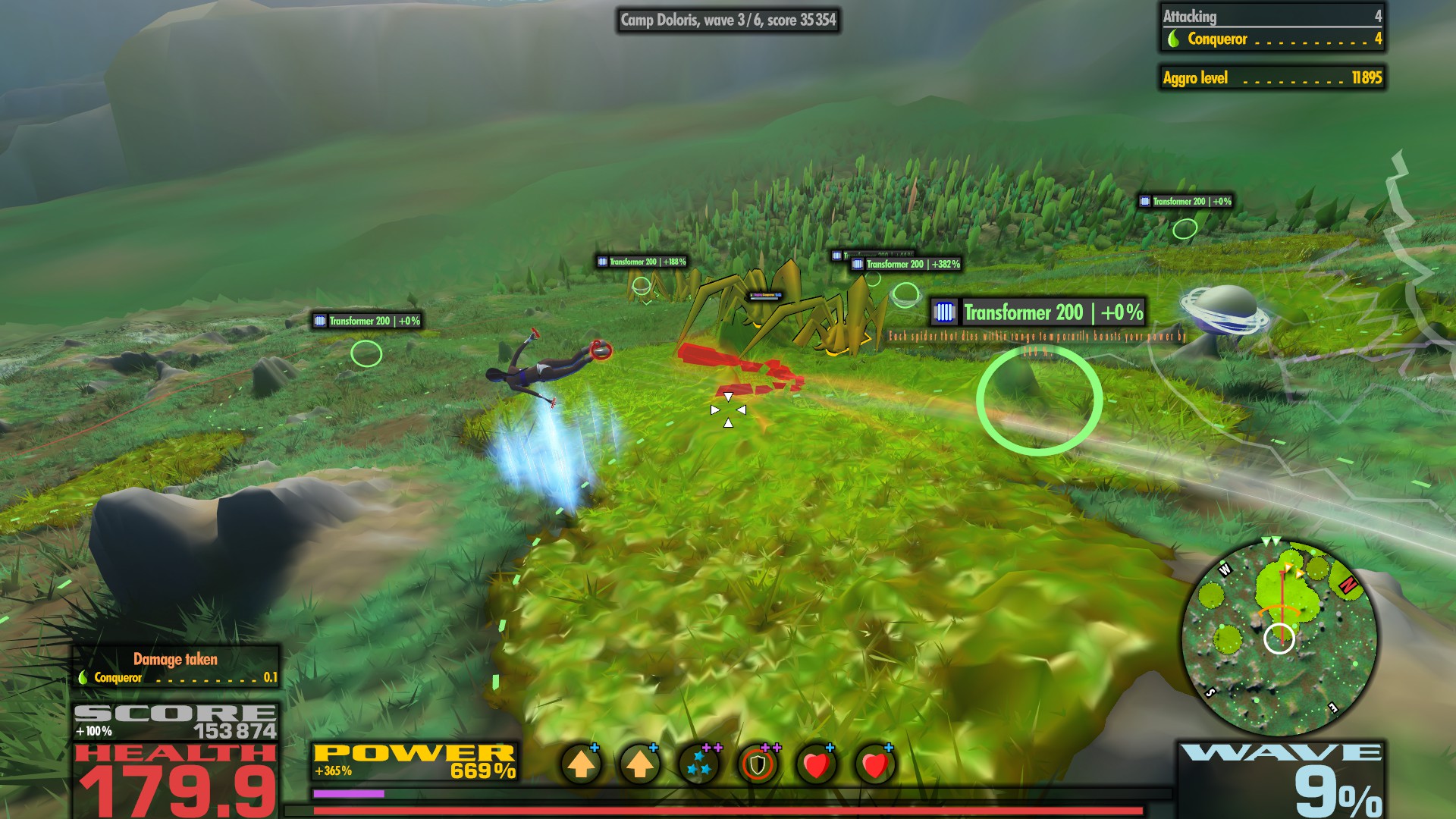 Camp Asperitatis is higher up and even more rocky. The terrain is demanding and makes precise maneuvers difficult, even the spiders struggle with it at times. There're six powerful turrets, but they're on timers. You'll need to keep an eye on the activation pattern to put them to good use. 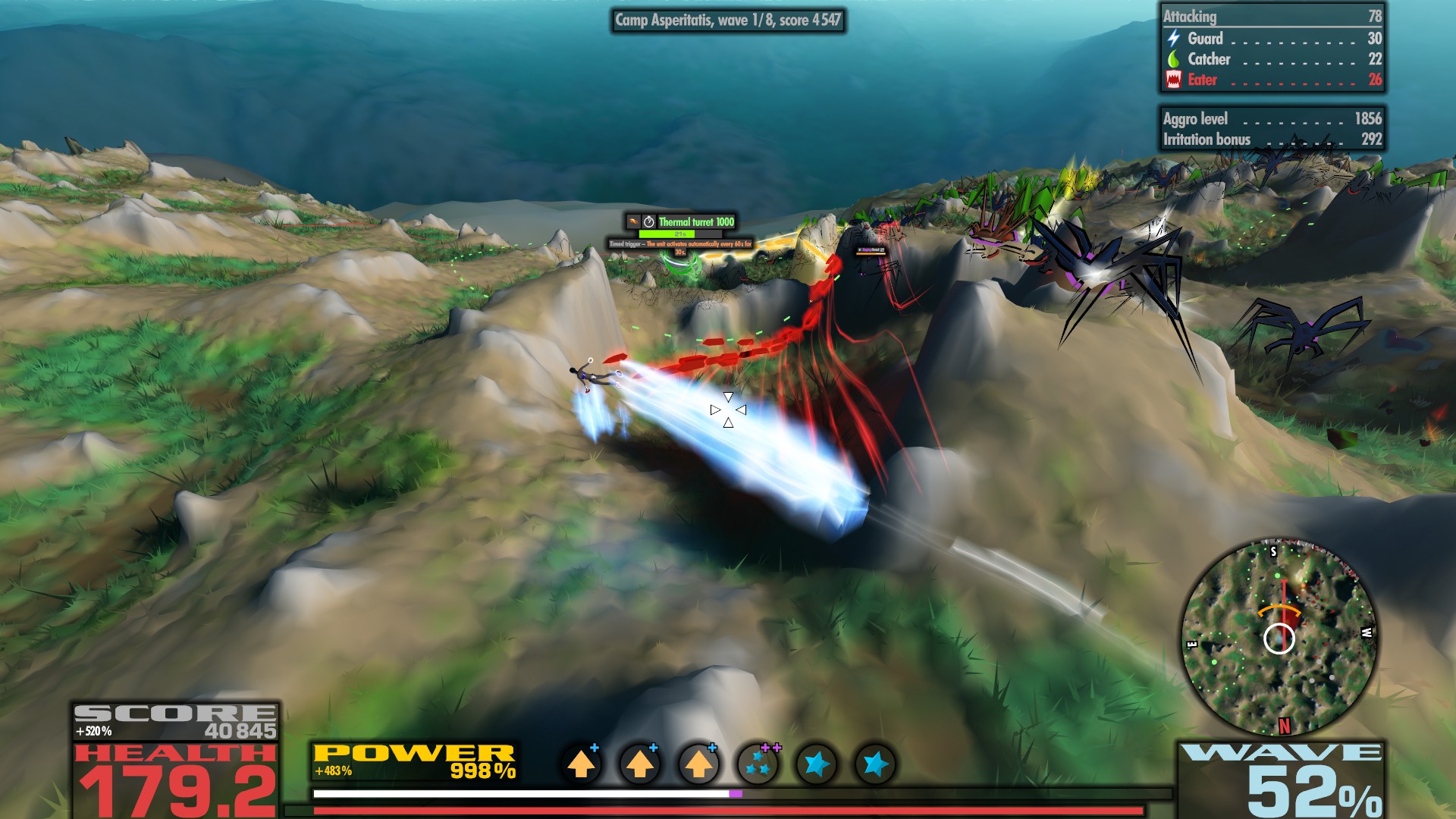 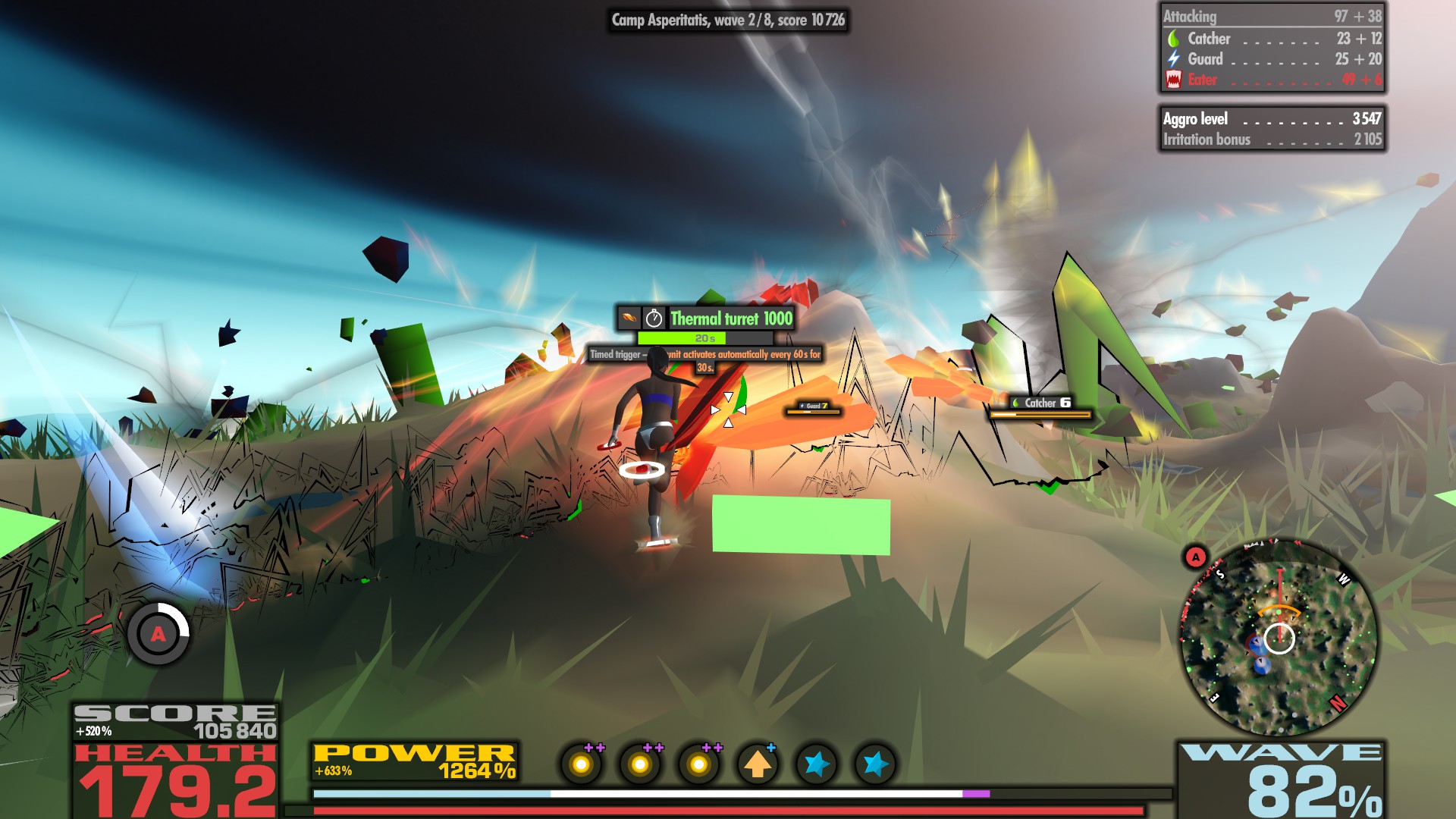 Camp Cognitum is a hilly, slightly sloping plain with thin vegetation. A large ring of time bubbles surrounds the entire site and offers massive protection. I recommend making full use of it as there are no other defenses. 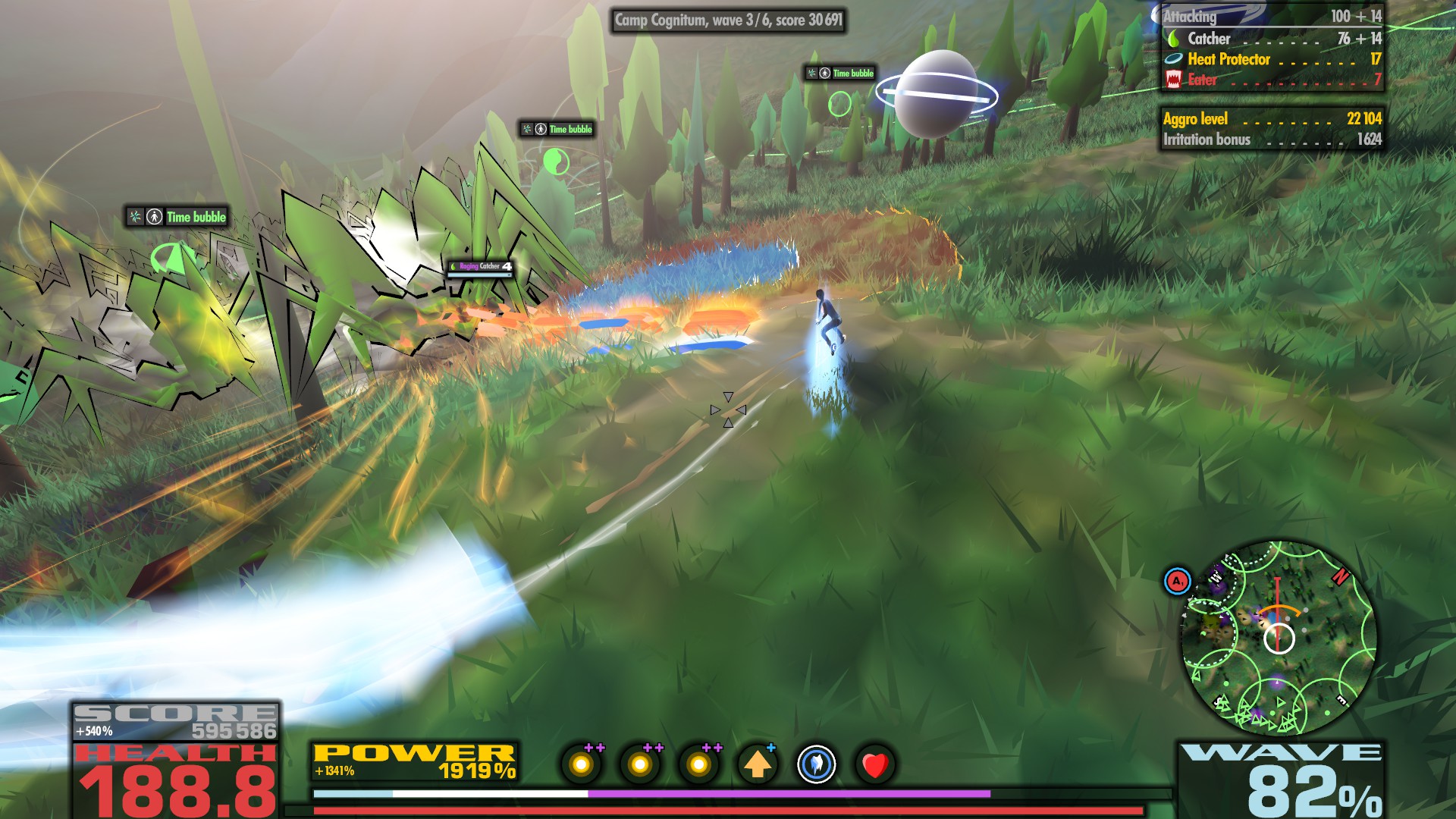 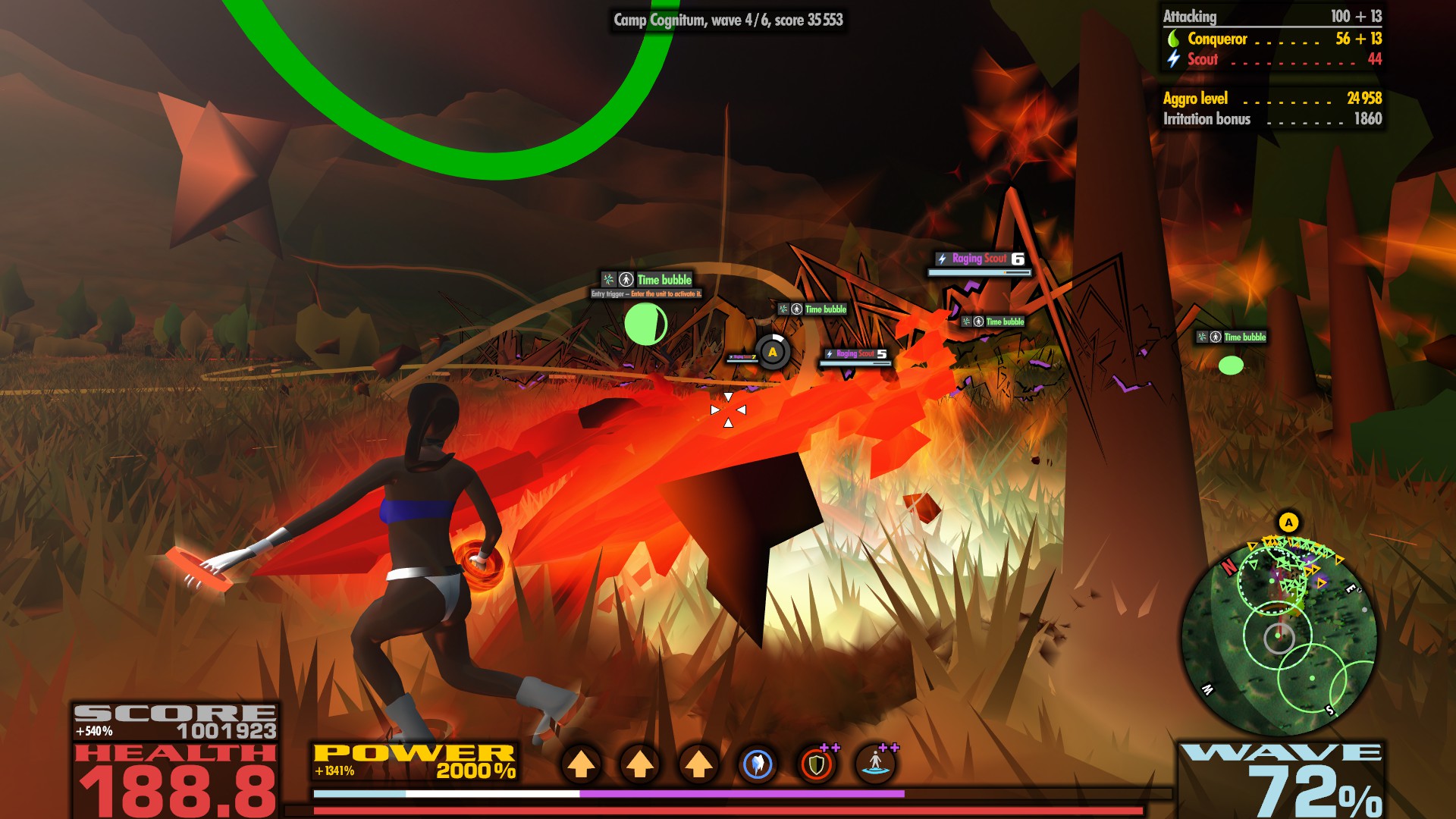 Cognitum was the first camp that required players to start a new journey in order to make it appear on the world map. When I initially designed the system that incorporates new camps, I was fully aware that that would happen occasionally. It didn't feel like a problem back then because the game was much smaller at the time, so I frequently started a new journey anyway.

Now that the game is so much bigger, it felt inacceptable even to me, and that's with having an arsenal of dev tools and cheats available. I really needed a solution to this.

I considered adding shortcuts or the ability to change the home camp. But there were game design issues with these ideas. What I came up with instead was a new game mode that I called Doomsday.

The idea for Doomsday is that camps are in more imminent danger. There are always one or more randomly selected camps on the world map that are threatened by swarms. You get to pick one of them and fight there. If you win, the swarms leave the other camps alone and attack elsewhere. You move along until you die or reach the happy ending, which will happen after no more than seven fights.

The fights get tougher from camp to camp and you can't sleep to restore your health. However, you get significantly better perks after each victory, which makes choosing the camp to fight at an important strategic decision.

Ironically, two weeks later I found a way to automatically import new camps without the need to start a new journey. It made me feel a little bit stupid as it was a way more elegant and direct solution to the problem. However, I don't regret adding Doomsday mode at all. I enjoy playing both Doomsday and the original mode (which I called Infestation) a lot. The way I think about them is this: Doomsday, with its short playthrough time, feels like an action rougelike, whereas Infestation plays more like an ARPG with permadeath. Both are valid and enjoyable ways to play Myriavora.

Camp Anguis is located in dense forest that provides ample natural cover. However, you will rarely need this because there are also two trap units that are great for keeping spiders under control. They're manually operated and stay active for 20 seconds once triggered. Spiders can enter an active trap but not leave.

Captured spiders are much easier to fight, of course, but keep in mind that they can still attack you if you get too close or even enter the trap. Also, you usually have to deal with a couple stray spiders that don't enter the trap for various reasons.

When the timer runs out, the trap deactivates and its entire content is going to descend upon you like a biblical plague. Since the unit has a 30 second cooldown, it's best to retreat to the forest or the other trap. 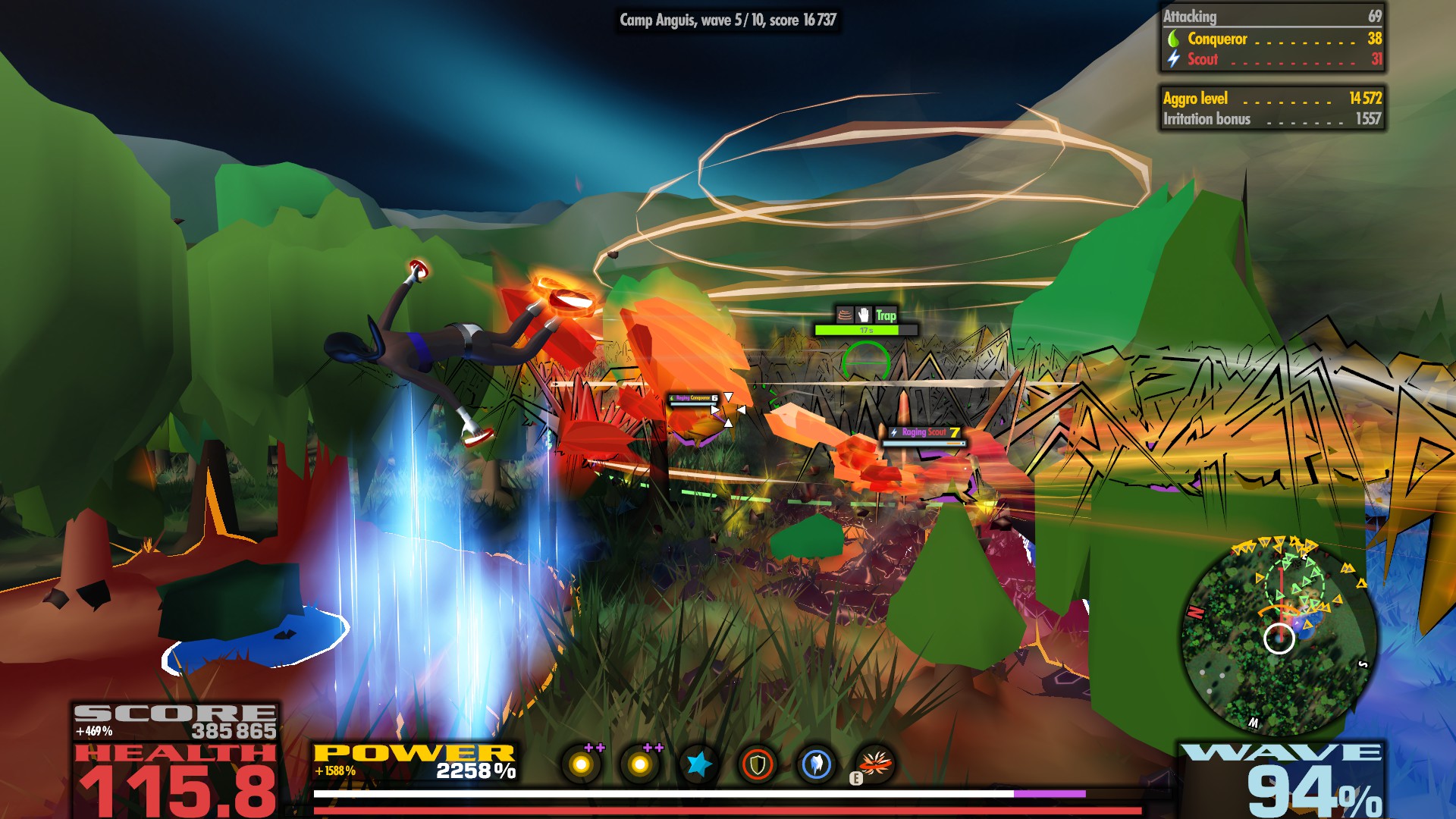 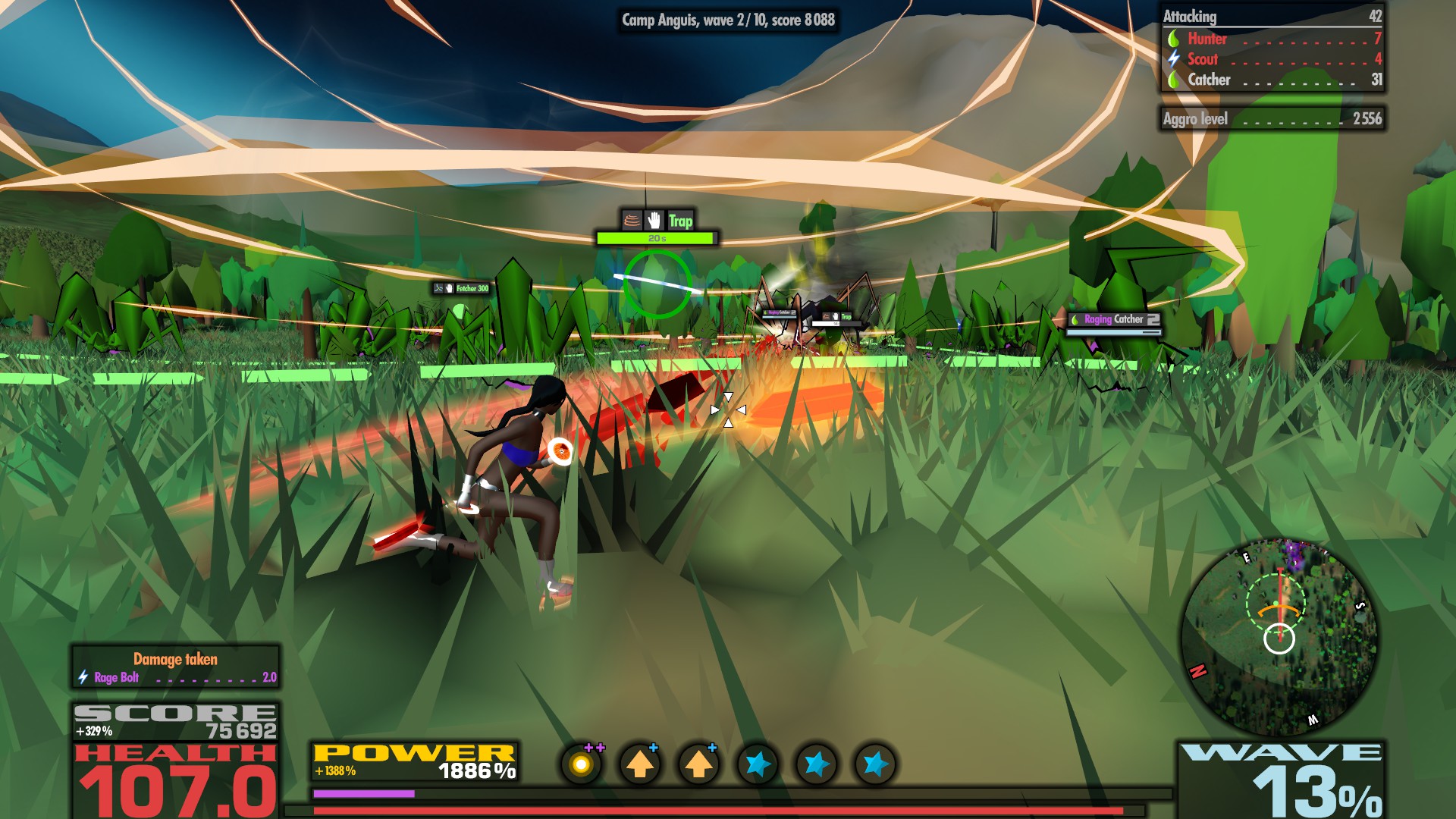 I had so much fun using the trap unit that I decided to create a trap skill as well. It may not be the most effective one outside of very specific circumstances, but it synergizes well with other skills and few beat it in terms of pure enjoyment.

Shortly after, I finally managed to fix a nasty bug that had been bothering me for a long time. Some replays on the leaderboard were broken for no apparent reason. It was extremely hard to reproduce, so I had always assumed that it happened randomly due to either an uninitialized variable or a race condition. Or maybe both. I had double and triple checked every relevant line of code, to no avail.

Turns out, my assumption was wrong, it didn't happen randomly. There was method to the madness. In fact, if I had repeated exactly what happened in the replays, it would have been very easy to reproduce the bug.

In my defense, however, I have to say that the steps that triggered the issue were extremely specific and seemingly unrelated. After starting a battle, you had to (1) change the camera distance, (2) leave the fight using "save & exit", (3) go back and use ice shield or pheromone decoy in one of the following waves.

I would never have stumbled upon this bug in my own playtests, especially since all of these steps involve features I rarely use. So, the lesson I learned is that I need to use all features the game offers, not just those that I like. But that's easier said than done with a game that big. Of course, I've played with the camera distance option, I've left and returned to a battle, I've used ice shield and pheromone decoy before, just not all of that at once. Catching bugs that specific requires a lifetime of playtesting.

That's why the game is in Early Access in the first place. Playtesting is a crucial part of game development and I can't do all of it on my own. So, I'm extremly thankful to the few people who not just put up with an unfinished game, but actually play it the way it's meant to.

Next was Camp Hiemalis, which is located on the edge of a sequoia forest. The hilly terrain is well suited for gliding but can be challenging when precise movement control is required.

There are four traps that overlap with two large transformers - a powerful combination. The catch: the traps must be entered for two seconds to activate. They will then remain active for 15 seconds after exiting. The timer can be reset at any time by entering the trap again, no matter how briefly. Of course, a sure instinct is required, because the captured spiders will hardly miss this opportunity to attack you. 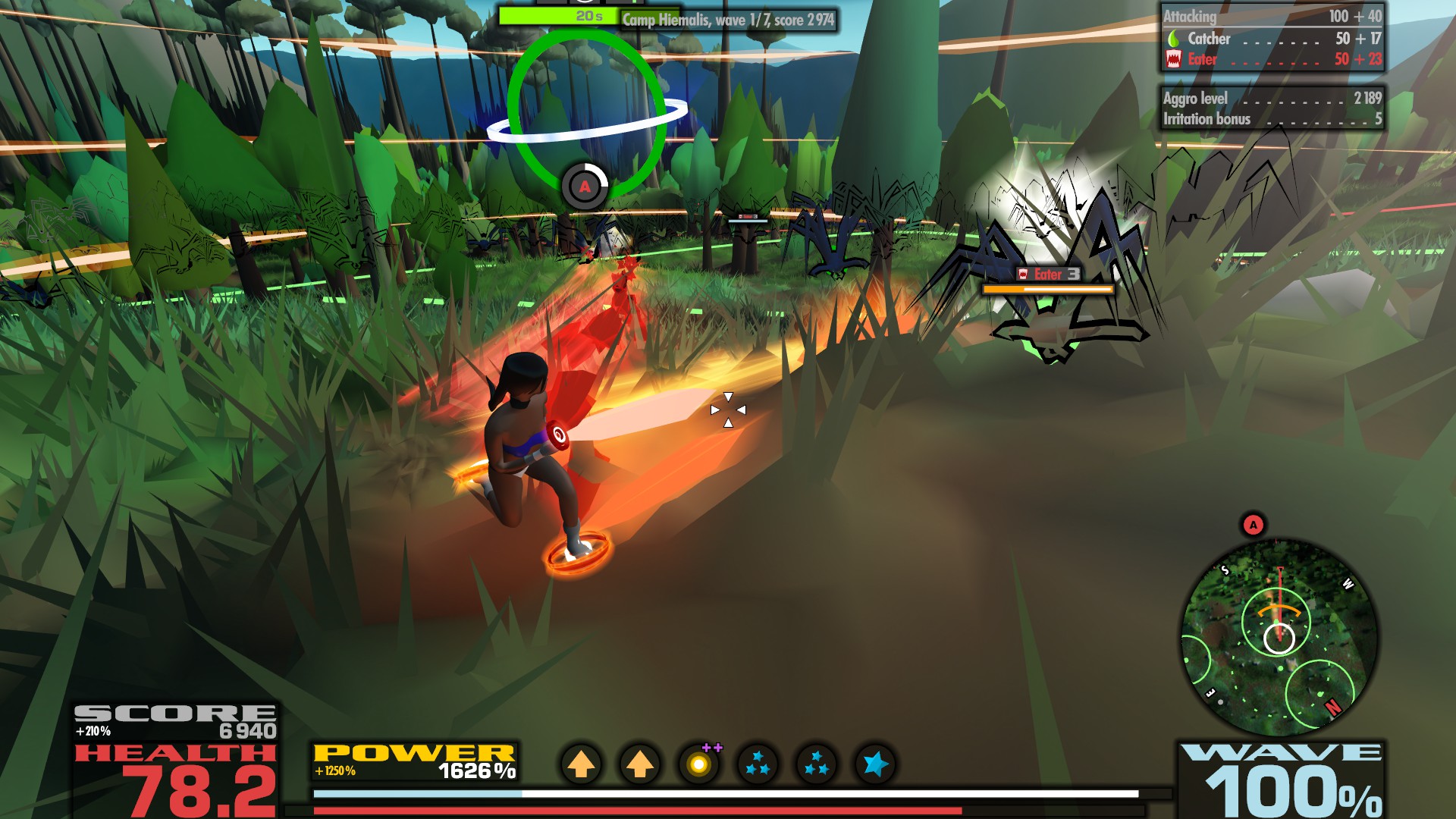 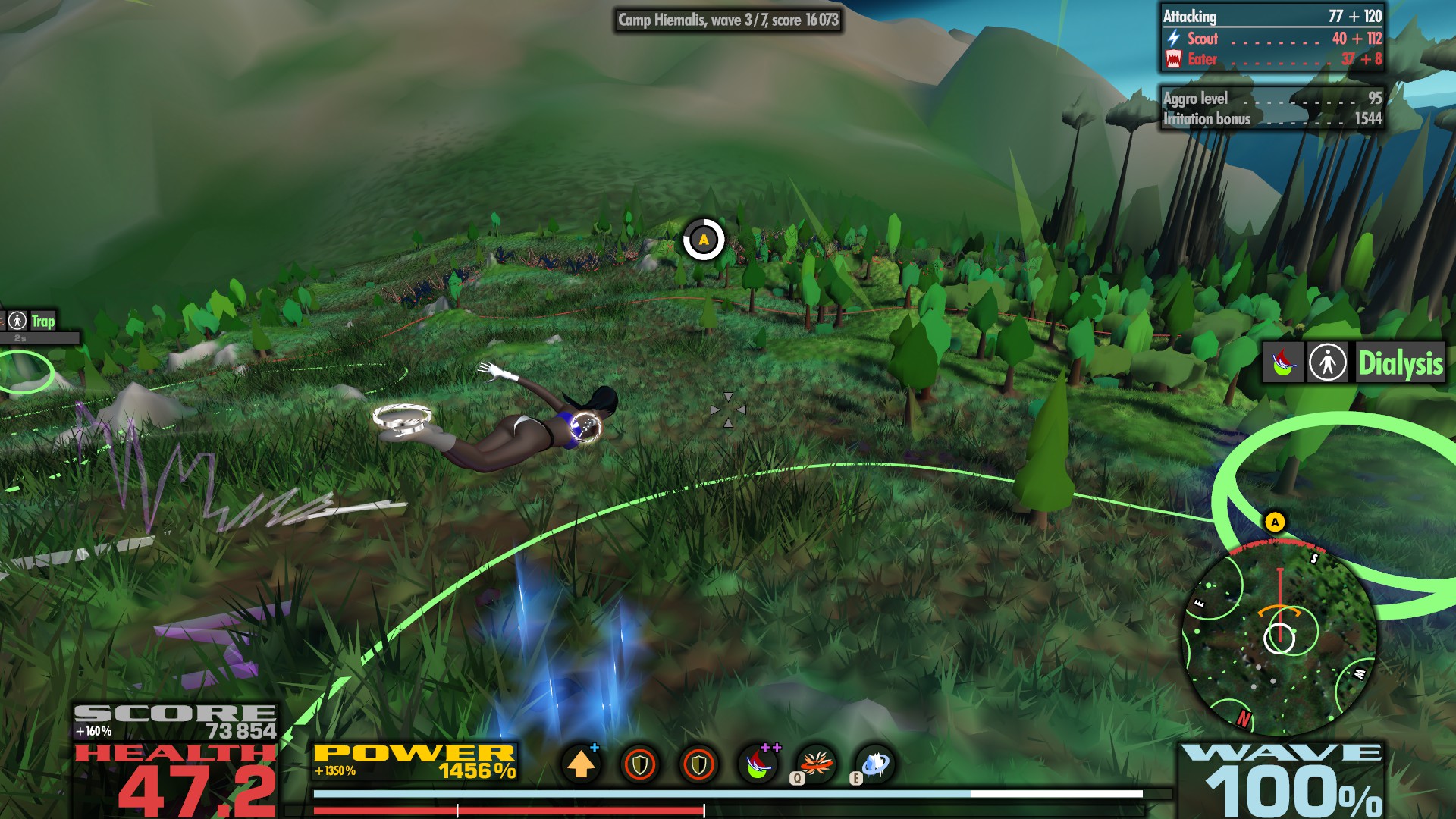 I put Camp Spumans on a hill in a mountainous region. The terrain drops steeply on the south and east sides. 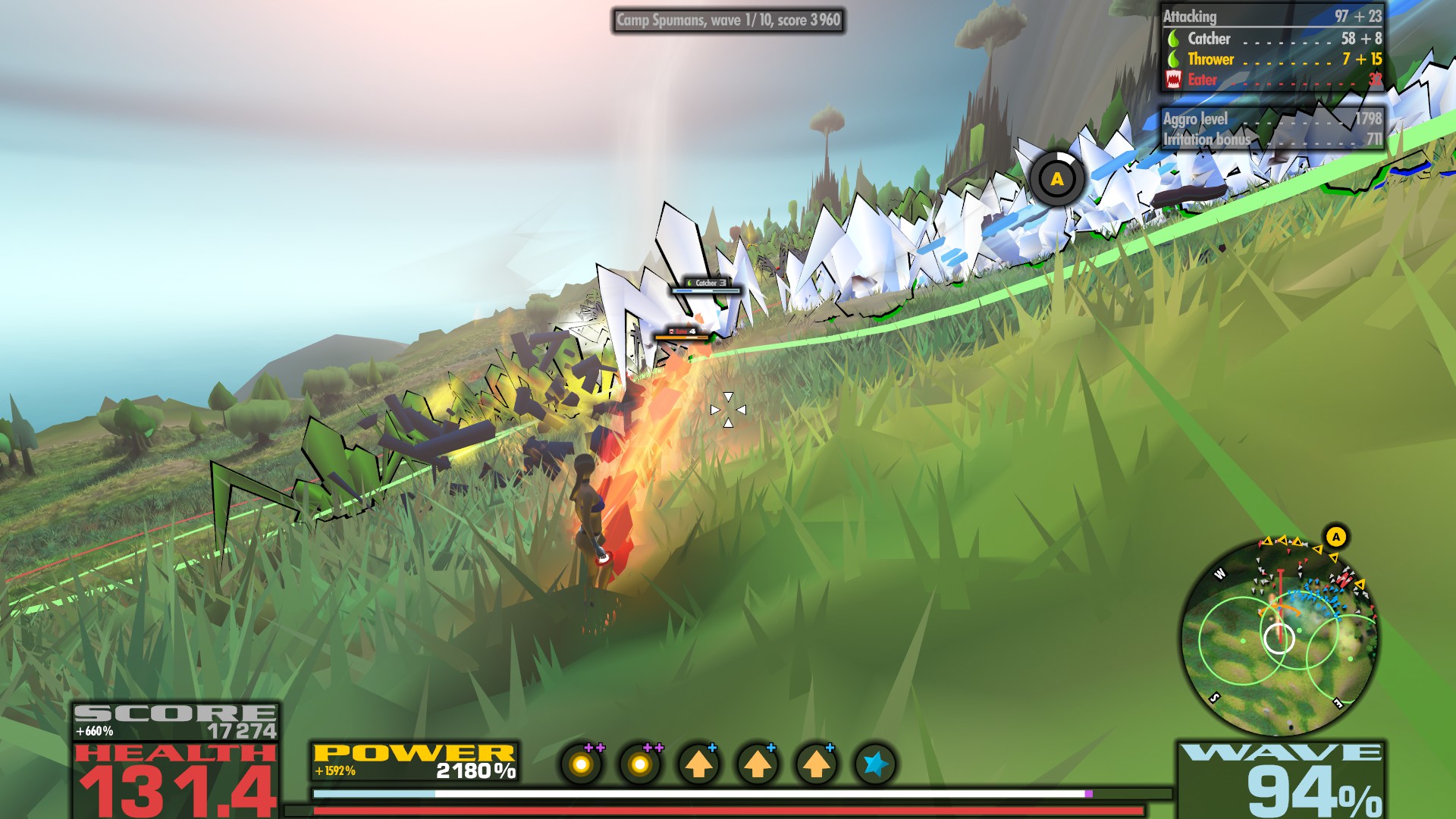 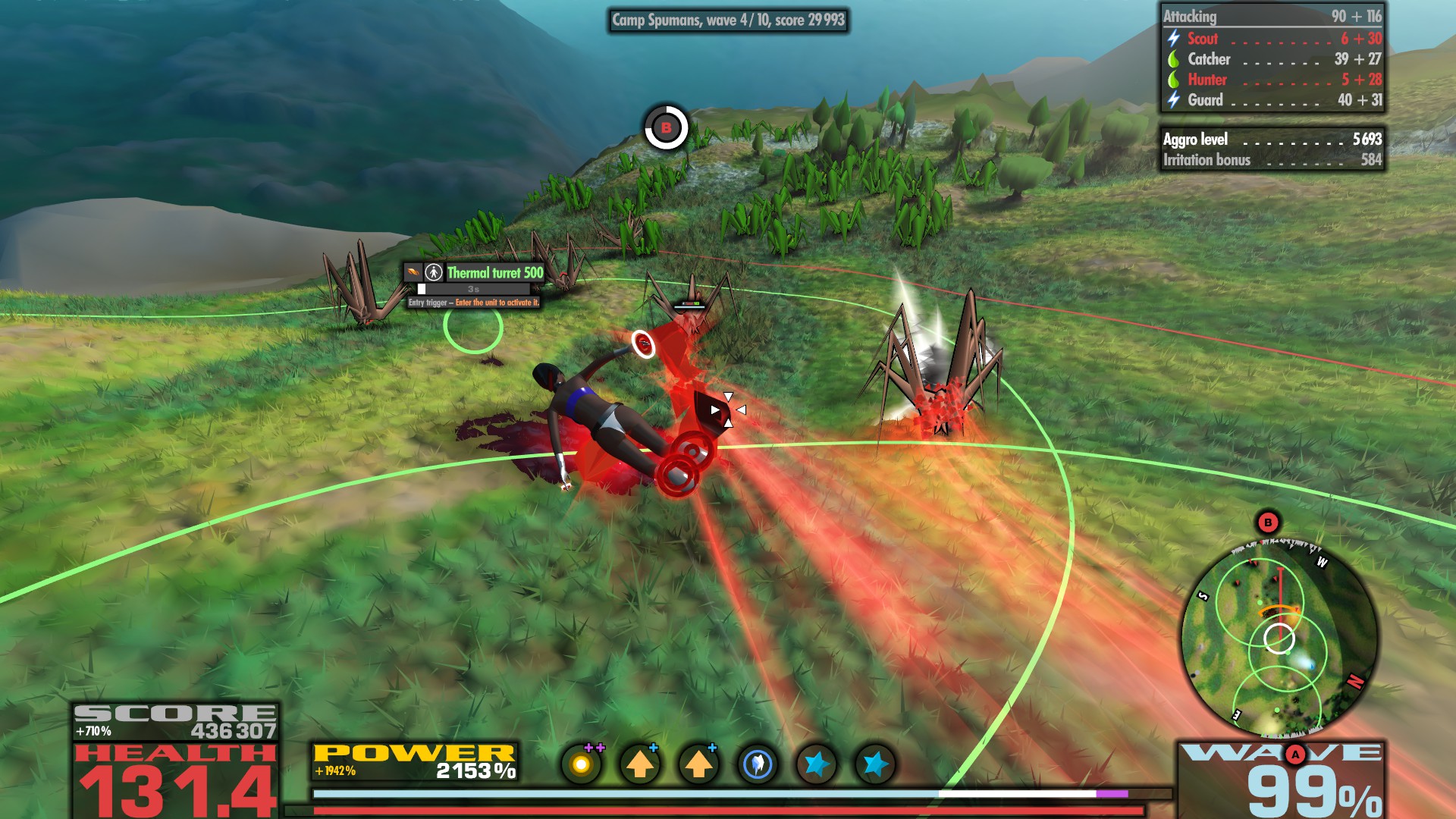 There were also a number of minor fixes and improvements, the details of which are beyond the scope of this article. All in all, I'm quite happy with the progress I made in August, especially considering I spent a good chunk of it programming rather than creating content. I think that in September I will not only be able to maintain this pace, but exceed it.

Check out Myriavora on Steam