A retrospective on my experiences during the first year of being a Solo Indie Developer and what I've learned.

My first year as a Solo Indie Dev

As The Red Front (www.theredfront.com) nears the first Beta version. It presents a great time to reflect upon the development process which has lead up to this point.

This blog post provides a history of how this project was started, the prior development prototypes and shows how all of the past projects have contributed to the current.

My foray into the Indie Game Development World…

My foray into indie game development began when a friend from my university days got in contact with me. They were looking to branch out, build a game in their spare time and see it through to release. I found out two other friends were also recruited and they had a collection of idea’s already in place.

As someone who appreciates new opportunities, I leapt at the chance to be part of something new (plus playing games is fun, right?). We set up skype meetings, formulated some idea’s and started to develop out first prototype game. It was going to be a mobile side-scrolling game which the player controlled a bee trying to defend the hive from marauding wasps.

I wasn’t overly thrilled with the concept, but I joined in on the development.

The first few weeks involved reading up on programming, completing unity tutorials and getting a grasp on how game development worked. There were many unique challenges as this was our first real-world game development project and working in a disperse team across several cities presented a challenge.

As you can imagine, things fell apart quickly.

My friends were quick to start discussing financials, everything from forming a registered company to how we would distribute profits. Whilst necessary, these discussions were taking place before any sort of product had begun.

Soon after developing the game design document, it came to crunch time. Time to start development of the game, feeling somewhat confident after covering a few hundred hours of development tutorials, we were finally beginning. The issue here, the only person contributing to the file repository was myself.

· The third (and final) trap

After a few weeks of development, I asked my friends what was being contributed. I generally received silence, sometimes brief excuses. The general feeling was all motivation from the rest of the team had already hit zero.

It was at this point I decided to take things on my own path.

I’ve always been a fan of multiplayer games, primarily co-operative player versus environment. As a learning exercise, I aimed to re-create the famous agar.io to get used to multiplayer development. My prototype worked, I created sessions of multiple “blobs”, synced them together across instances and learned a great deal from this basic exercise.

However, I thought this was not the direction that I wanted to go with. 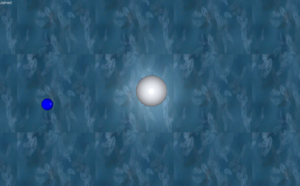 Blobs, a screenshot of a prototype game.

For the third prototype, I looked at some of the classic games I used to enjoy (ski-free, chips challenge and another DOS game called Jetpack). This was a platformer game where you flew around a level, collected treasure and went onto the next stage whilst avoiding monsters and traps.
I built a new design document and began to develop a game based off what I had learnt to date.

The stages were built from platform block squares, the player could drop a limited supply of bombs to essentially mine through them. They would have to avoid traps, monsters and a variety of hazards to be able to progress.

In total, I spent close to 100 hours on this project before I decided to go in a new direction.

In short, the concept of this game still feels solid. The player being a treasure hunter, with a salvaged junk built jetpack and a strong inclination for cheap whiskey. During development I came across the indie-smash hit spelunky. This helped solidify the idea that I was developing a game which could work (and even slot in with the games existing fan-base).

I had a friend of mine who is a part-time artist complete some hand-drawn characters, I felt the work wasn’t suited and the friend was also too busy with other projects to help further. I reached out to another friend who created some further concept art, as well as the prospector based off my idea’s. Unfortunately, this friend also had little time as they had recently become a father.

The second concept of the player

I still carried on through the development, until parts of the game began to feel clunky and I realized to have any length of decent gameplay, it would be a considerably larger time investment than I first envisioned.

This game has been shelved after a lot of development and from other competing ideas I had through development of this game.

My most recent prototype game which I have continued developing now for hundreds of hours is The Red Front (www.theredfront.com).

This originally started as a concept “bullet-hell” game. Through development, it evolved and took on a new shine and has begun to more closely resemble an action-arcade with a little less focus on bullet-hell game mechanics. 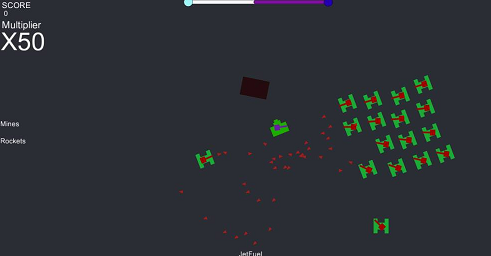 A very early prototype of The Red Front, from June 2016

A lot of code from the Relic Plunder game came in handy, even code from the blobs and the original bee shooter game has come in use. The previous code creations has been a huge asset to assist with the prototyping.

Several iterations later, the game grew further and I eventually found an art style I was comfortable with (through lots of trial and error). 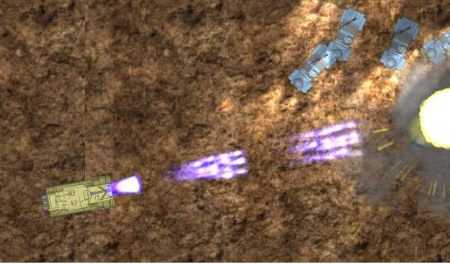 During the iterations, I removed more and more of the bullet-hell and endless waves of enemies. I started to develop a product which feels like a solid action-arcade tank combat game. As further iterations have occurred, I am very quickly approaching what I call the Beta version. 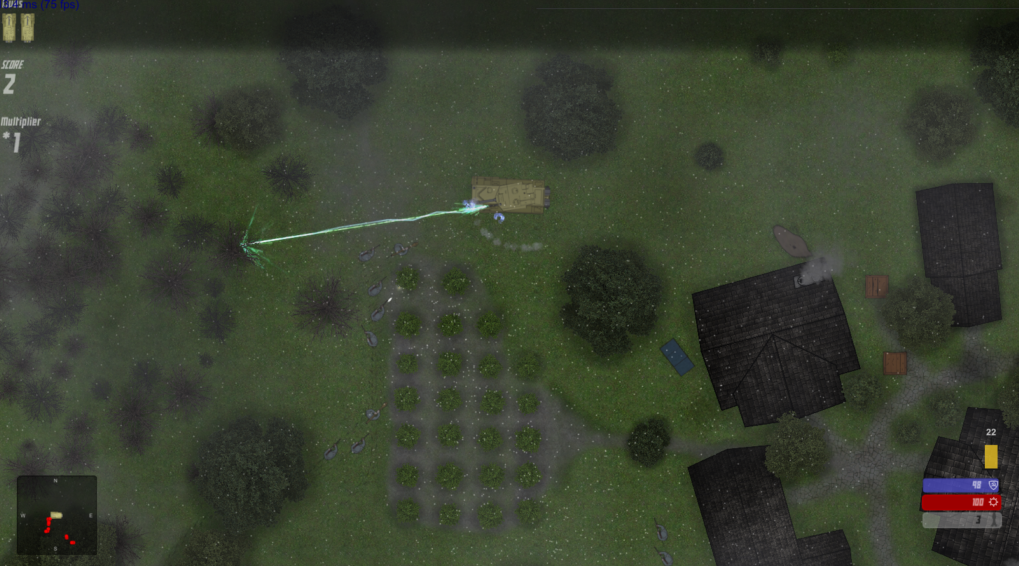 It has been a very long journey with a lot of learning along the way. As I approach the Beta version of the game, I am getting more satisfied with what I have created.
The game now provides a well-rounded base, with majority of planned features already included. Several features were scrapped, evolved or modified to support what is now The Red Front.

The earlier prototypes have all had their equal shares of learning experiences, ultimately helping me find the game which I wanted to develop in the end. Experimenting with games, designs, builds and prototypes is greatly beneficial in helping to nail down the final project.

At this stage, the project is targeted for completion by October 2017 and will be available initially on PC (via Steam and other mainstream distribution services).