Hey everyone and welcome to our latest progress update for Combine Insurrection. This month I had some solid progress on the code side of things, a smaller amount in mapping. We have some ground to cover and two videos to show off so let's get right into it.


To be completely honest not enough got done this cycle on mapping. This was due to two things, first the coding spilled over into my mapping time and second I spent some time trying to get my Episode 2 models to work again in-game, unsuccessfully. So there were only two maps worked on this time around but there was some good progress within those maps; this point is more towards the Graveyard map then Strangle Hold.

There are some areas that will not be shown in the SH screens so I will go over what I did in those areas here. First I did some work in the power generator room to make the room less blocky and also did some small changes to the lighting. I also worked a bit more on the coolant tank as far as lining up lights against models and modifying lighting values a bit.

One building you will be able to see the exterior for is the command center.

So here are the screen shots: 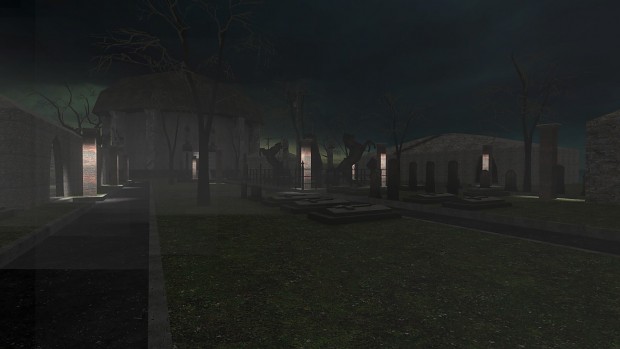 So let's first discuss the fog problem. If you recall from the last update ther was a problem with the fog in the map not being rendered correctly across the entire map. Well turns out that Valve broke or changed how func_smokevolume works and there is now a size limit to how much area can be covered using it. So what you see here, for the fog, is func_dustcloud being used. It is hardly perfect for the job but it gets the job done. Here you see static fog, with dynamic fog it looks better not for screen shots as everything becomes silhouetted and you cannot make out much detail.

I added in grave stones and markers to all the rest of the map, added in more trees, and more light posts as well. 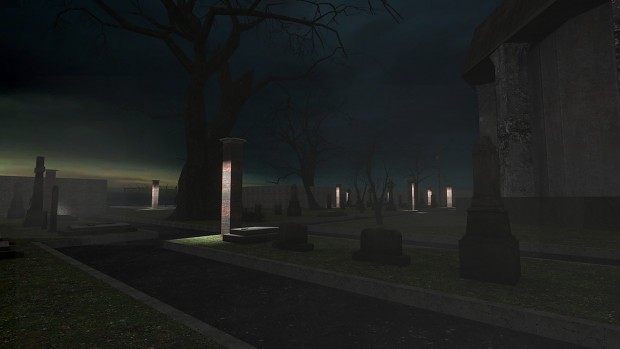 Here you can see the back area now with trees, grave stones, and proper lighting. 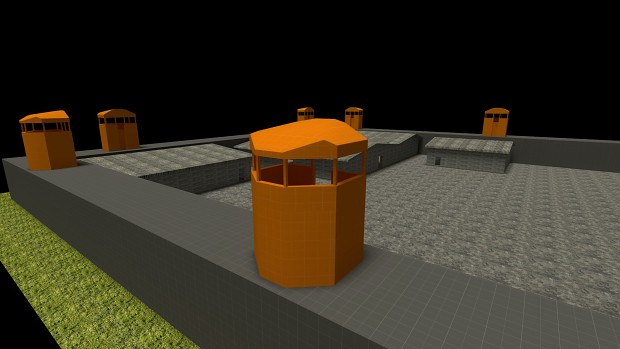 Most of the work in this map happened over this week. In this screen shot you can see two new buildings as well as these new guard towers. These will be where you will be doing most of the fighting in this map from. I am still working on the design a bit, it may be better to half the supports and bring the roof pieces down for a more defense oriented structure; these are pretty open. 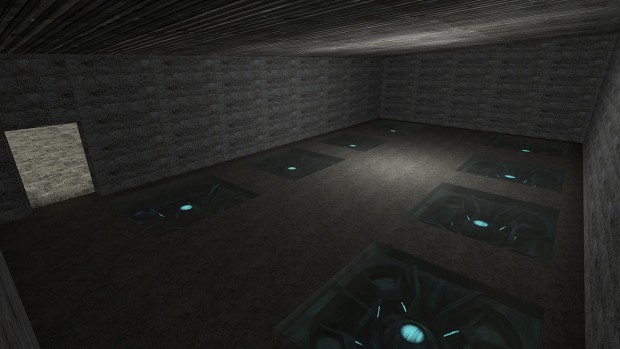 This building start out as something else but I decided to change it to another area I had planned to make instead. This will be the reinforcement room. Any troops brought in from the outside during the Strangle Hold map will be teleported in through here. There will be a similar building where supplies will be teleported in as consumed; that was what this was originally going to be.


That is all for the mapping, I am hoping to get much more done in the coming development cycles since coding will not present a major part of the work.


The changes made to the HUD this time around were both of new and old in origin. I decided that the old style of how I had our new elements was getting too cramped and taking up too much room. So I decided to return the elements to their horizontal states and then stake them on top of each other. However for the shield and armor bars I went even further by shrinking them down 50% and placing them on the same row to safe space.

The newest addition to the HUD is the cool down timer. This element is a visual representation of how long you have left before you can use an overheated weapon again.

To see them in action see the demonstration video at the end of this article.


So there are two things to go over here. First is the more eventful one, the cool down timer. Previously when you over heated a weapon you would just be unable to fire it until the cool down timer expired. However there was no way to tell how close to expiring the timer was because it was not shown anywhere. That is now changed with the addition of the cool down timer HUD element. After a weapon overheats a value will be added, determined by the weapon being used, to the cool down timer and as time passes the timer will dissipate until it reaches zero. Once at zero the heat meter for the currently used weapon will also start to decrease and you will be able to use the weapon again.

The second change is cosmetic. Once a weapon is overheated trying to fire that weapon will result in the "dry fire" animation and sounds for that weapon being used. Right now that is only for the pistol but I will add the code to the other weapons during the next development cycle.


Most of the work this month was in the code. I modified the new HUD bars to fit in with my new idea for how they should be positioned on the HUD and also did the coding to add the new element for the cool down timer and linking that element to the server code.

I also fixed a bug with Zeeky's Ironsights code. For some reason Zeeky made it so that checking of the weapon had ironsights was done from a function in the CBaseCombatWeapon class instead of from each weapon. This caused that check not to work or work in such a way that it was not explicit and prone to errors or bugs. So instead, at the request of Fresh'z on Steam, I made changes so that whether or not the weapon could go into ironsight mode be defined explicitly inside of the weapon script files.

We also discovered another bug where the camera would move between the normal position and the ironsights position too quickly. This was because there was a timer associated with the move and if that timer had not run out then the camera move would take a less amount of time to complete and look very jerky and unnatural. So we removed the problem link of code and now that does not happen anymore.

Finally I added some code last night for the dry fire sound and animation to be called for the pistol when the weapon was fired while overheated.

In the next dev cycle I will be focusing on adding the dry fire effect to other overheat enabled weapons, fixing my grenade weapon, fixing the animation calls so that the overheat bar does not call health bar animations, as well as the colors used for the overheat and cool down timer bars and adding HUD animations for them as well.


Here are the two videos for this update:

That's everything for this update. Expect more mapping do be done for the next update as what is left to do in the code is not going to be taking up a lot of time except maybe the grenade weapon. I should still have plenty of time, though, for more work on mapping.

Thanks for taking the time to read all of this and for following the project!