NEW version of my Marvel VS DC-Universe MUGEN mod as of 2017-20/01! I do think it has the biggest roster of MARVEL and DC-characters of any MUGEN-mod.

NEW upload of this MOD as of 2017-01/20 - i have made it alot better and fixed things in the previous release that i didn't like! 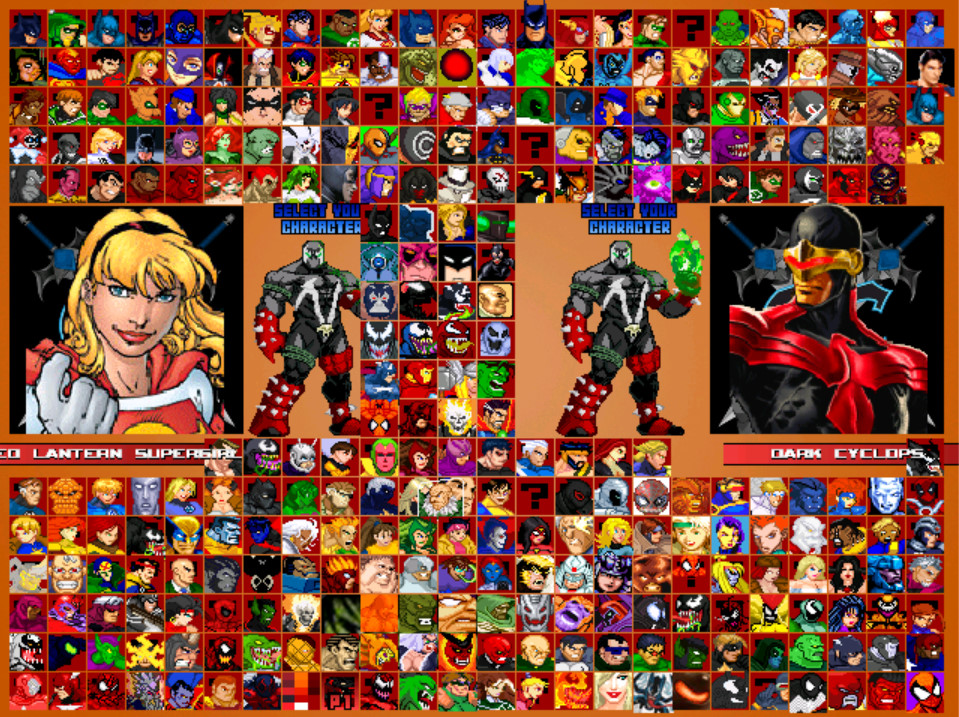 1. Music on all stages (hopefully, at least all stages has a music file attached to them - but i am not sure if it plays on every stage, but i think it should) as in the previous version some stages didn't play their music.

I did go through the entire stages-folder and i did fix some stages where music didn't play.

2. The Batman-music on some stages didn't fit a fighting game - Batman music removed or cut into pieces, only the parts of tracks suitable for a fighting-game were preserved. Expect more for less - pretty much the same kind of edits made on the music-tracks as i did in my music-mod for Third Age:DAC.

I have edited most Batman-themed songs and only preserved the strongest and best parts loud enough to be heard in a fighting game. Alot of the music had to be cut because of it not being heard very well among the punches and kicks. I also thought that some of the music didn't fit the scenery. I'd say now the music is more befitting a fighting game as it is more heavy and loud.

3. I wasn't pleased with all the unserious characters added by another modder when he updated Superheroes 2000 v 4.1 to v 4.3. I have removed and replaced all such characters with real MARVEL and DC-comics characters. Expect also upgraded chars - 20 new chars or so, and 55 new chars in the char-folder.

Due to a limited number of character slots in the game/mod, only the best fighters made it into the game - but there will be 55 new characters in total to be found in the char-folder. The best ones are already inside of the game -and all non-comic and unserious characters have been replaced with real characters from Marvel and DC as stated above. I'd say there are like 20 new characters in-game. Then we also have upgrades for even more characters from both DC and Marvel.

4. 14 new stages - Agent Venom and his stage has been added, as well as alot of stages with a Batman-theme. The music on the stages are not edited music but instead the music following with the stages when downloading them.

I have gone throught the entire select.def-file, and i did change the order-numbers for when a certain character will fight you in the single player and cooperative multiplayer Arcade-mode. Expect it to be correct this time around - with characters divided into groups of X-MEN, Marvel-Avengers, Mutants, Marvel-Villains, DC-Titans, DC-Villains, Spiderman, Gotham, DC-Justice League of America (JLA) etc.

Stages are also hopefully correct for most - or all characters when fihting them in the Arcade-mode.

Btw: I didn't create any songs, stages or chars - i just assembled the mod as everything was free to use according to the Mugen-sites. I also based it on another mod, but replaced the screenpack and added everything in from scratch.

Credit for the material is given to the respective creators.

The above means that i didn't create the material which i am using in the mod. But the material was free to use, as everything was freely available on various MUGEN-sites on the net - such as characters, stages and music. I did choose a unique screenpack for this mod that i found on a site called Crusader Knights or something.

And then i re-inserted everything that was already included in Superheroes 2000 V 4.3 into this mod using the new screenpack - after which i added my own stuff (that i downloaded from various places on the net) in the previous release, such as 52 new characters, 20 new stages and 20 or so new songs.

New for this release was fixed music on all stages, 20 or so new characters, many character upgrades to more recent versions and edited Batman-music for it to be more fitting for a fighting game. Also like 14 new stages, mostly with a Batman-theme - were added! As stated above.

I think this will be the final release. I wasn't originally going to update my old release from april the 7th - but i felt it had been rushed and wasn't released properly. Plus the mod became way more popular than i first had imagined it to become. Therefore i felt it was deserving of an update for it to be the best possible version.

The only thing remaining would be to balance all the characters if someone doesn't want some characters to be overpowered - and others underpowered! But that i leave for someone else to fix if they want such a mod. If i am going to release a new version in the future it won't come until next year in 2018.

Enjoy this release till then.

Video of the new release: