A few small additions to Mothership, progress is progress!

I have been busy at my brother's house building him a new gaming PC so I haven't had the time that I want to dedicate to the game. I did work on some features and I have a couple things to show for it.

I am still working with rare spawns and bringing new additions to the game. I want rares to feel more animated and intimidating so I made a few adjustments. Rares are going to be significantly harder and have a rainbow outline to keep them easily identifiable in a crowd. I am really enjoying R0j0Hound's outline plugin so I decided to have many uses for it - including a gold outline for elites. 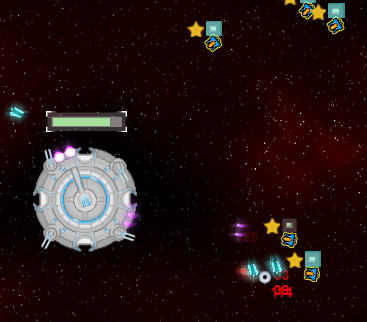 There is also another good use for the outline effect. In the game, a player can see what level a turret is by the color of its own projectile. I have also decided to add a faint outline to turrets and cannons depending on their special effects. Defensive abilities such as slow and push have colder blue colors while offensive abilities like crit and chain give turrets and cannons a hotter red outline. Look closely below and you can see the outlines. I might make them bigger in the future but I don't want to make modules seem so fake.

One really obnoxious thing a developer has to face is a failed implementation. It really sucks when a person spends a decent chunk of time trying to put something in their program only to require more time to actually implement it correctly. I have been trying to make rare spawns more dramatic with a small window that pans over to them and highlights their entrance. Sort of a picture in picture type of deal. Below is an image of how far I have gotten with this though Construct.

As you can see it is highlighting a certain part of the map, in this case the player ship. However, certain layer effects like the nebulous clouds in the background are not being translated very well. Construct 2 does not have a good way of creating a split-screen simulation. In the above example I am using a plugin from, you guessed it, R0j0Hound called Paster. It essentially takes a screenshot of the canvas and draws it in an area really quickly. In the process some layer effects are unable to be captured properly. Another plugin is available, however it has its own downsides as well. I may have to think of another creative way to achieve the dramatic effect I want.

I am not a programmer (yet!). Construct is made to be used by people with and without programming knowledge. I have over 1300 events made for this game, the most I have ever made in a Construct project. I worry that the game will end up not being optimized as I do not know the underlying programming knowledge to make those adjustments. I tested the game in-browser on my brother's computer and his hard-drive went crazy loud. Almost like it was reading/writing way too much. No other game on his computer did such a thing. I am not going to let it bother me too much as it seems to run fine in my browser on my SSDs.

When we first started we wanted to use Construct as an easy creation solution for the first game for Mach V Gaming. After working with software for awhile you begin to see the pros and cons. I will continue to work on the game until I feel it is ready to be played. Hopefully that will be soon. If you are interested in playing feel free to visit us on Mach V 's Discord channel and tune in for updates.