Elites, rare spawns, and bosses. All ready to destroy your ship!

All of us at MACH V have been making life adjustments, personal schedules and become addicted to WoW (Again). Nevertheless, Mothership development continues! 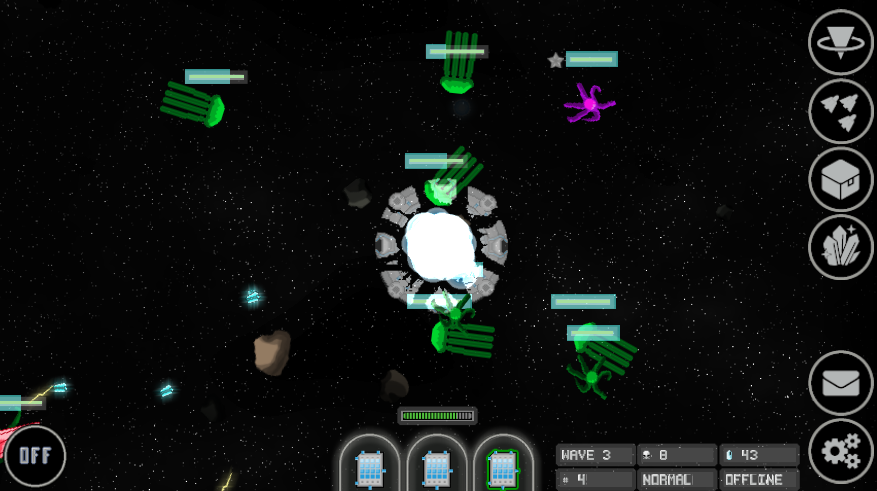 There are 3 types of rare spawns in the game. There are stars next to enemies to indicate their ranking, Gold for elites, Silver for rares, and red for bosses. I am also thinking of making a 4th ranking, a sapphire star - uber rare.

Elites have a 10% chance to spawn instead of a normal enemy with the chance increased the higher the difficulty you are in. Elites have 1.25 times as much stats as their normal counterparts so they are slightly more challenging but not too much harder than normal enemies. They reward slightly more minerals.

Rare spawns have a chance to spawn once per wave. They are less common than elites and their stats can very wildly from 1.25 to 1.75 times as much. They are always stronger than normal enemies and can have different weapons as well. They can be completely different from normal enemies in that they are not always pirates or squids but possibly something you have never seen before. Defeating these will reward even more minerals and possibly a module.

Bosses are uncommon like rare spawns, however, they can only spawn in boss zones. Boss zones are only available as destinations if you survive past your 5th jump. Visiting a boss zone does not guarantee the boss will always spawn and the enemies in a boss zone are all elite so be careful if you are to venture in these zones. These encounters are very different from others and the bosses have their own weapons at their disposal. Defeating one will grant tons of minerals and some rare modules, perhaps even MORE.

These encounters will add more meat to the stream game. I cannot wait to add more! I still need to fix some of the weapon bugs that keep reoccuring but I really want to add variety to the enemies in the game. I have plans to make more and I can keep it simple when it comes to enemies as they do not need to have as much animation as the player ships. Cores have been fixed and I just need to add more to the database (See Week #4 for a preview of core abilities).

This is an unlikely scenario as there will only ever be one boss at the same time (and much more difficult). It is very amusing and fun to break your own game sometimes.

Rare spawns are going to be so much fun. Especially with Silver and Red stars. These will require direct control of your ship to defeat successfully. If you have any comments or want to display interest in the game feel free to visit us on Mach V 's Discord channel and give us your thoughts and suggestions.