In this update we go over major changes and content for the upcoming month of March.


So we are ending our February and coming into what could be our biggest event since our Kickstarter campaign. We are on a schedule of releasing our playable demo by the third week of March. We want to give you guys a little incite of what the demo will contain and how things have changed since our campaign up until now.

The demo will be about an hour long depending on how you play it. It will be more or less an intro into the actual story and feature our main character. When we release the demo we are really going to be looking for some strong feedback, everything will be upgraded and we feel we can not make a great experience without your input. Our goal is to make a really great game, we want the game to do well commercially and critically.

We have had some issues with the voice work for some of the characters in the demo. Most of that was due to some of the voices we rushed and acquired shortly before its release. Now we are going with our core and strongest group of voice actors for the next showcase. That would include Jalen K. Cassell, the voice of Jagen , Cecilia Yus, who will voice Mioni and hopefully Amira, Echo Viridian as Sinara, and our newly acquired voice actress Danielle Mcrae who will be the new voice of Sen.

We are wrapping up this month with a lot of great news and content. I have been working on Jagen again and I have been making his sprite look more like the image that Ricky has drawn. I have added more detail to his armor and upgraded his gauntlet to look more like Ricky's detailed work. 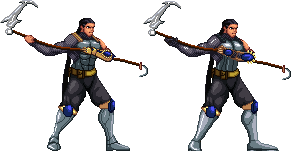 Using this design I have been implementing it into Jagen's combo animations and I really like how they look opposed to what they were before. This new version will be featured in the demo, so he will definitely have to look the best he can look.

I have also been working on some animations dealing with the character sprites such as climbing, jumping, bending down, and stance. Here is a small example of Sen's in game map sprite.

We have enlisted some more on on tile sets over the past couple of weeks and the production has been fantastic! We have had some really talented people come along and the work they have produced along with our contracted spriter is amazing you are really going to enjoy what we have to offer as far as landscapes go. 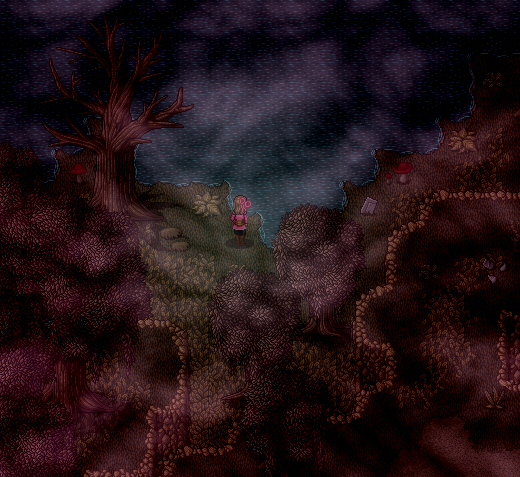 I firmly believe that we should have one of the best soundtracks for an indie game this year. Mark continues to impress with his remakes of our older tracks. Jagen's new battle theme may be one of the the best tracks he's made so far. I personally think Jagen has all of the best music associated with him. I can not wait to hear you guys' opinions on it."Sundering Volante"

We have plans to release the game in the near two to three months. That being said, I want to clarify what this game will feature and what may be left out as far as the first chapter goes. As you all should know, this game is going to be chapter 1 of a full length RPG experience. We aim to make the chapters at least between 14 and 17 hours. We have 3 playable characters, 8 areas in 4 locations, and a few secret ones too, all in the first chapter.

What we may or may not be leaving out is an additional playable character and 3 more areas which would just take a little bit more time but could be added to the next chapter.We shall find out what we could do with that by the end of March.