Made some progress this month, unfortunately the recent updates to SourceSDK caused some problems.

Hey everyone, that time of the month again. Although there is a bit of a damper on this MPR. As I am sure some, if not most, of you are aware, Valve recently updated the SourceSDK and it has been causing some fairly substantial issues. I was lucky enough not to get hit too hard by the first round of updates. The secondary salvo, however, killed quite a few textures for no apparent reason which rendered the mall map and more up to date Combine Bunker UG1 map DBC (Dead Before Compiling).

I have some screens from a slightly less updated CBUG1 map, but I had done a bit more work on it since I last compiled. 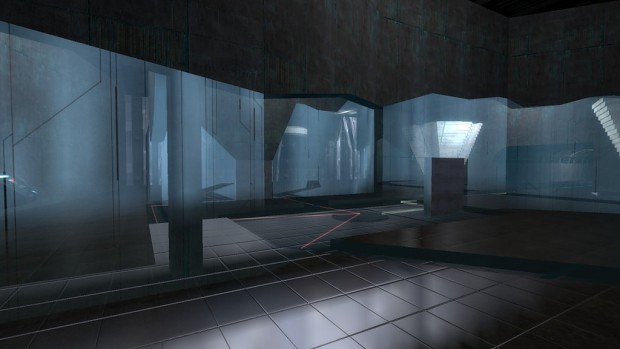 Added in a terminal for starting the de-shielding procedure as well as replaced the glass textures with something a bit more combine-like. 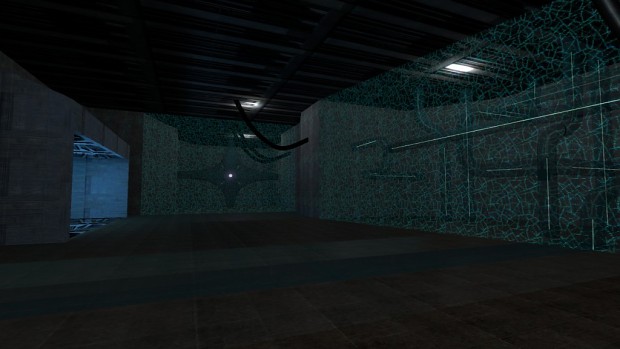 Added a temporary teleporter housing and changed the glass texture on the pipes so the beams and energy absorption crystals were more visible. Also was in the process of changing to a different key_frame texture (see upper right corner).

Thought I am unhappy to have to say this, until Valve gets an update out or I figure a way to get those textures to read, I will likely not be working too much on mapping.

I will try and find something to work on in the mean time so we can continue as usual (probably start working on finalizing the HEV Upgrade System).

Thanks for following CI!
Geowil.

ahhhh. combine rooms are never that big. At least not the walkable part.. Make the floor a bit smaller and add some models! :)

Nice seeing that progress is made though! :)

Sweet! The top picture is looking really good, but the bottom one needs some work. Try adding a source to the combine forcefield around the edges. At the moment it looks like its floating.

You're making progress. I love the floor and you seem to be varying the shape up a bit. Just keep working on bring the brushes to life, especially the ceiling. Anyways, keep up the good work, cant wait to see what comes next.

Really nice media and information of your progress on mapping, but the second picture is really empty, add more things there and it will be way better!

Ah I got hit by the update glitch too, found this fix and it worked for me (mostly). Hope it will work for you too: Forums.mapcore.net

Neat, I had a link to one that had the pre update files. I lost it though, it was on Facepunch.

The map is really coming along nicely

Happy to see it's going well. I like your mapping style ( in regard to your use of space and open areas ). An individuals artistic concept shouldn't look like 9/10 other Source mods. The more unique, the better. Used well, I can see this approach working out nicely. Fine update and all the best with future production.