Lore and 3d models of our carnivorous plant boss Terivorare & his minions!

Terivorare, also known as the Eater of Groves, is the result of an unfortunate magical calamity, and a scourge in and of itself.Terivorare is almost eleven feet tall and weighs approximately one thousand two hundred pounds. It is strongly aligned to the Element of Earth, and it is theorized that it is at least moderately aligned to the Void. 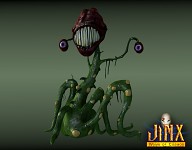 OriginsThe origins of the creature known as Terivorare can be traced back to the catastrophe of the Seal's breaking, like so many other calamities. The original plant, a benign flower called Teripholos, resembling a cross between a nightrose and a nettlelily, is very useful in alchemical pursuits due to the ease with which it can absorb earthen materials like prime metals and its capacity to withstand, and channel, various arcane streams. As such, it is highly sought after by Alchemists and Wizards, although it is hard enough to find and harder still to keep alive that its presence remains extremely rare. It is impossible to cultivate outside of its native lands, although Alchemists have found means to dry and preserve some parts of it for their work.Originally from an island far to the east, the Teripholos that would come to be Terivorare was planted in a grove to care for the dead, undoubtedly a gesture of kindness from a relative, possibly one of the means to acquire such a rare plant in the first place. Alas, the corruption of magic in the area forced surges of untamed, uncontrolled energies through all available conduits. Teripholos, an excellent conduit for both the raw magic of the grove and the lifeforce of the cycle's end found in the bodies underneath, mutated. The current form is a travesty of the original meaning of the flower in its native lands, as it signifies peace for the souls of travellers, and has become a constant menace to anyone in its area of influence.

"It was terrible... My group had just finished protecting a caravan from Orthern to Nyrespring, and was headed back to the Capital. Our leader decided to take a shorter path through the Forest of the First Omen, despite the warnings of the locals...It didn't start out bad, we avoided the Grove of the Prophet, we didn't want to cause trouble there, but when night fell the group lost sight of the main road. There were ten of us... then there were seven. I still don't know if they managed to get out of the forest before the others, but it didn't take a scholar to know we had stumbled into the Festering Wilds.The air... it felt unnatural. The earth seemed to squish under out feet, like everything was a bog, but it looked solid as ever. The trees... I swear the trees moved on their own. They were alive, and they watched us, they lead us to their master. Their king... I'd never in all my days in this land seen anything so terrifying as the beast that lay in wait. The eyes looked like fleshy orbs at the end of snakes, and its mouth could swallow a man whole... The fangs... its venom made the ground itself hiss and melt. It didn't see me, but all my friends... they weren't so lucky. Anyone who goes into that forest... Just... Just don't."

Quite a few attack patterns of the creature have been documented by survivors and careful scouts. Most light armor seems to be useless against the creature's attacks, and purely magical or ethereal armor is hardly effective, as some attacks seem to align to the Void. 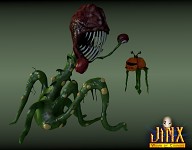 The creature's body doesn't seem to resist physical injury in any meaningful way - although beware its spore bursts - and so the creature can be fought, and, presumably, killed. It does resist, however, Earth aspected magic, often entirely. Wind aspected magic is diminished, especially when the creature is rooted, but it is not entirely ignored.The creature's eyes can turn independently and covering the entire range of motions a prehensile vine allows, making it almost impossible to sneak on the creature - although it only has two eyes, and so can only focus to up to two targets at one time, making group efforts much more effective.It is possible to hit the eyes accidentally, or even aim at them, and potentially blind the creature, although such an event provokes a recovery state during which the creature surrounds itself in vines. When it emerges, mere seconds later, its eyes are back - whether it regrows them rapidly or attaches others from another vine, it is not known.The creature is usually encountered stationary; in fact, deeply rooted. Although reports place it at different areas, though, such apparent mobility was thought to be an error in accounts. One of the survivors, however, shed light to this trait: it seems the creature is entirely capable of uprooting itself, utilizing its roots like a group of prehensile limbs, carrying itself bodily along forested areas.Its speed while so mobile seems to match most horses, although it has the advantage in such stakes, since forest undergrowth does not impede it.Although it has not been observed rooting itself, it is theorized that it requires little time to burrow its roots and settle to a new area.

The creature, as most plants, is weak to Fire aspected magic and due to its strong alignment to the Earth Element, it is also weak to Ice magic.While susceptible to both slashing and piercing attacks, the spore bursts make the latter choice a less risky one, but blunt weapons have little effect.A large group is strongly suggested to fight the creature, although particular care should be taken if it enters its recovery state; although it is mostly inert while recovering, and thus an easy target, the thrashing reaction that settles it into that state can be fatal.The creature's integrity seems to include the vines it utilizes to attack and defend, and as such, attacking the vines injures it. Care should be taken to prevent its escape, should it uproot itself. 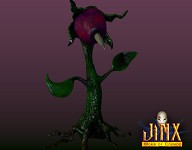 Plaguedarts are deadly, long ranged, carnivorous plants that can decimate everything with their poisonous barb.

The cannon fodder of Terivorare's army, Plagueblooms use their teetch to cause bleeding while poisoning their victims 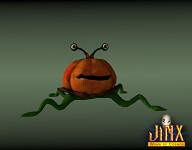 The smallest of the corrupted plant life. Plaguebooms have only one purpose. To go BOOM!. If they are not dispatched immediately they charge their opponents and explode when they reach them causing massive damage.