Departed Mockeries are the outcome of the everlasting conflict among three deities, Raune, goddess of the Dead, Thraxos, lich-god of Undeath and the Jester, trickster god of Mischief.When a mortal is about to die, his spirit abandons his body and floats, normally invisibly, above it for a few minutes as a silver spectral entity known as Departed Shadow. When the soul has been welcomed by the Songstress of Requiems, it vanishes from the Plane of Mortals. 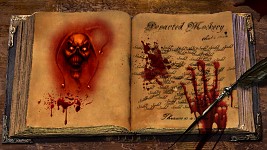 Thraxos wanted to mock the young goddess and cursed all those who are on the brink of death, instead of passing on to the Afterlife and the Great Halls, to stay forever trapped in Undeath using their own skull as a vessel for their tormented soul. Although the Archlich was a powerful deity when he uttered that curse, Raune managed to counter its effects, at least partially. Tying the outcome to the soul's own unconscious sense of guilt, she managed to spare most of them. Only those who had committed the most heinous crimes would be susceptible to the ramifications of Thraxos' curse.

Regardless of the magnitude of the results, Thraxos was more than happy for his new army of undead creatures and spent countless days mocking each and every soul unlucky enough to have been cursed so, but his elation was short lived. This revelry, so unlike the archlich, was behavior erratic enough to draw the attention of the Smiling Trickster. The Jester is chaos incarnate and there is nothing he savors more than a moment of mischief and mockery. He had actually thwarted Thraxos' plans often enough in the past for the latter to consider him his archnemesis, and that was all the better in the Jester's book.

A fortnight after the creation of the first Departed Skull, the Jester gifted these tiny undead with clown hats and his passion to sow discord and create chaos. Their former master was infuriated by this mockery and destroyed most of his creations.

Nowadays Departed Mockeries act as agents of the Jester and serve as a constant reminder to Thraxos that the Smiling Trickster still laughs at him. 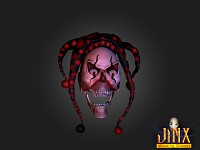 On rare occasions theJester grants deific boons to his most faithful Departied Mockeries.
These entities are granted new found powers and their appearance shifts to a new more horrific form. Ascended Mockeries are quite rareand they act as avatars of the Jester, each of them safeguarding a certain portion of his powers and his portfolio.