Game Object Visibility, Weapons and Equipment - After working for several months on the new gameplay and by the advice of a colleague, I have decided to publish regular updates and hope to get feedback with it.

One of the biggest issues of the old version was the bad visibility of game-objects, especially bullets, because of their transparency and glow. I tried to make the background darker (as in the Boss Preview), added black base sprites to all bullets and tested a few other things. All of this looked to blurry and not accurate enough for the genre. I also wanted to keep the colorful graphics.

But last weekend I came to the idea to adapt the outlining effect from the solid objects, made it a bit thicker and gave it a dynamic transparency. Feedback was good and I hope this will resolve all the overview problems. Everything appears now more sharp and tight then before, with only a minimal decrease of the performance. 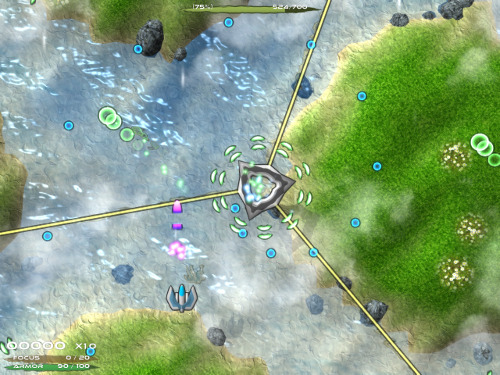 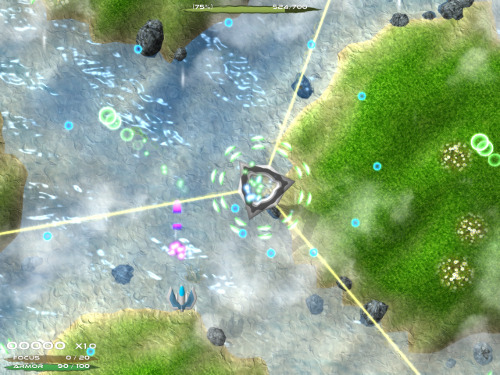 The game will feature 5 weapons with different properties each with 2 upgrades which add new active (e.g. triggered with button release) or passive behaviors according to the weapon style. The styles are: fast (yellow), focused (purple), multidirectional (green), multitarget (blue) and one special type which still has to be defined (red).

One of these weapons will be the Tesla Rifle (blue) which is the best choice against bosses with additional enemies. The bullets do not do instant damage but put a non-stackable DoT-effect on the target. Upgrade 1 will add two arcs on impact to damage nearby enemies. Upgrade 2 will add an overload - while firing you charge, and if full you can release the button to damage all enemies on the screen. 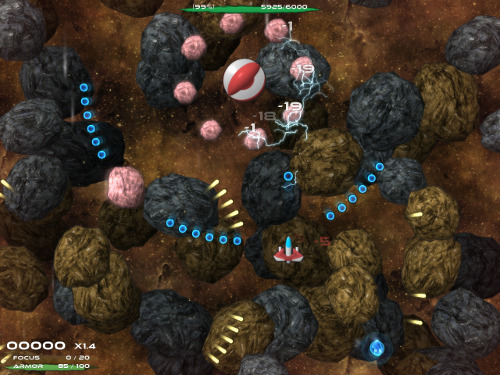 Another weapon is the Wave Mortar (green) which shoots forwards and backwards. Upgrade 1 lets you switch to left and right if you release and re-push the fire button. 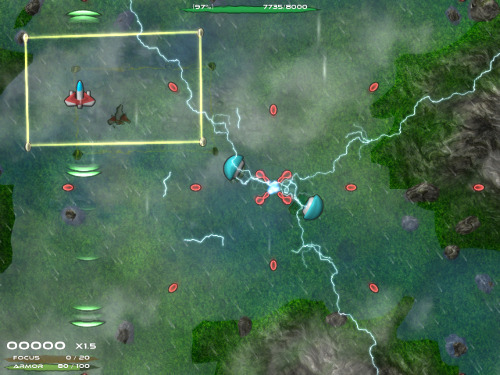 During a battle the boss will deterministically drop temporary level-ups for those weapons. You have to collect them and lose them if you get hit, but they can be recollected. Currently there are 3 levels per weapon.

There will also be 3 classical bombs (e.g. destroy all hostile bullets) and 7 companions which float around the player, maybe attack with certain abilities and improve the ship (e.g. chance for double-damage, chance to resist damage, reduced collision range).

So the current plan is that weapons define the main player gameplay, bombs act as powerful resource with limited use and companions are a sort of equipment which changes the function and behavior of the ship.

Because some friends push me to release a demo, this will be the next thing I'm working towards, but it will still take some time. Many parts need to be decided, others implemented and I also want to create the first area before releasing an alpha version.

Thank you for dropping by and if you have any questions, feel free to contact me.
- Martin