We take a look into the history of Modular Combat and reflect on some of things that have changed between now and then!

Posted by matthewdryden on Jul 1st, 2009

Just over a year ago, we released the second public version of Modular Combat, v1.04 – named simply for the fact that it was revision 104 in our development area. Quite a bit has happened since then – and I’d like to take a few moments to tell you a bit about what was happening back then.

When I released v1.04, my partner (Andy “FTWinston” Watkins) was traveling abroad. Modular Combat (originally called “HEV Mark VI: Modular Combat”) only really took off when Andy came onboard, and we had decided to wait until we had something with viable gameplay before we started PR and released.

We decided this because I knew Modular Combat was originally going to be all gameplay changes – and very little custom assets (we actually had none). While Andy was away, I continued working on the mod and got it to a point where I felt it was ready for a release. I put together what eventually became v1.02 (revision 102) and then released. I had just finished up the bug fixes and what not with v1.04 when Andy came home to a whole new ballgame.

We know had a small community growing around the mod, and an enthusiastic one. At this time, we were working with a HL2 clan called c3gaming, who were our main beta testers. Seeing their reaction to the mod was one of the biggest motivations to keep going. We hiredTexfrom the clan to do some off the BoSS voiceover work – and she did admirably. 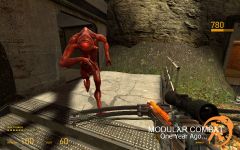 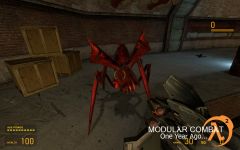 Work for the Month Afterwards

We really started getting busy in July. Although v1.04 came with all spawned monsters as red and minions as normal colors, we quickly switched that up and started rebalancing things. A lot of we had to do was even out the game. Our monsters became too strong too quickly, and example comes from Andy in this actual note in revision 112:

“lowered vortigaunt health (took me 46 hits with crowbar to kill a level 20 ... that's not good for something that can one-shot you from the other side of a room!)”

This is also where we started realizing that we were doing things that Valve had never intended us to do with the Source engine, such as randomly spawning monsters in Deathmatch games. We were struggling with a few network issues that was causing lag on the servers.

We also had run out of monsters we thought we could put in the game. We had Antlion Workers and Hunters set up (still do), but they required a model that is not distributed with the regular Half-Life 2 installation. In order to avoid players having tomountEpisode2, we decided to reskin the original Antlion model with an off-white skin to signify the difference.

One of the biggest problems we are met with is not having enough monsters. We solved this problem internally by mounting the Episode 2 content, which gave us access to the new Hunter and Antlion Worker models. This solution was not a viable one – as not everybody owns Half-Life 2: Episode 2. So we sadly removed the requirement for the content and the Hunter monster.

That wraps up the first post for “One Year Ago” in Modular Combat. If this post is well-received, I’ll be sure to do another one, so let us know in the comments below! I’m also leaving you with a few questions:

Thanks for reading, and don’t worry! We’ll soon be releasing v1.75 of Modular Combat! (More news on that very soon!)

Nice! I have HL2:EP2, so that shouldn't be an issue for me; but for other people who don't, yes. This may drop the ammount of people playing MC.

I heard of MC at around version 1.04; the beginning. I only watched it a few times, didn't really download it till 1.74 came out.

I'd really like to meet the people who don't have HL2:Ep2 installed. I feel like there's a lot, but none of them are speaking up. I highly doubt that we'd ever mount Episode 2 content - at least not until it becomes available publicly.

Mag Mine + Lasers is a horribly lame combination - but you're absolutely right, it's totally effective for PVM.

I believe that anyone who owns a source game can get the sdk base and the orange box sdk base i think...

I got 2 accounts on steam, one with HL2EP1 and the other with OB and other games i currently use.

I remember playing with Tex and her friends, I have Ep:2, Not a problem for me, I first heard about Modular Combat from its parenting site, ModDB.

My favorite combination would have to be Teleport, Recharge, "Secret Module", and MIRV.

I'm a Shock Scout(Shocktrooper + Recon) I blitz up to enemies, Pound them with a shotgun blast or two, If I find myself in a rough situation on terms of health, I use sprint and run away, then teleport to some health. If I'm against a tough enemy, I use mirv, and with the explosion either killing or confusing them, I pound them with whatever I got.

Tex is awesome. I still chat with her from time to time. You're a deathmatch player to the core, Hazmat. :) Always good to have you around.

Always glad to be around ;).

I bought the orange box when it was $10, so Ep2 would be fine

I first heard about it on Podcast17 (or Modcast, pretty much the same thing imo)

Favourite combo would be aux regen with teleport, infinite teleport with sprint ftw

Hehe, I still remember the day we decided to put in the changes to have a larger size Aux Power Tank and lower the drain on sprint...it was one of the first big gameplay changes we brought into HL2:DM.

I feel that EP2 isn't widely owned enough to mount its content. I think you could pull of something similar by copying the lines of code for the AI behavior of the Hunter and Antlion Worker onto newly modeled monsters would work better.

I first heard about MC while searching moddb for random mods.

Perhaps we should start a poll on this.

MC is a great mod, love it.
About EP2 content:
Somehow Obsidian Conflict managed to include Hunters in their mod without having to mount EP2...
Situation was like this:
I hosted the server with EP2 content mounted and two friends of mine joined the game and were able to see the hunter models as well.

Don't know if that is legal or a workaround or whatever...but it worked. (I guess the content was included in the mod)

That's interesting, I'll talk to the devs about that.

I would be fine with EP2 content even though i don't have it.

First heard of MC when version 1.04 was announced.

I never used module combo's cause i never knew how back then.

Hehe, if you don't have the content, then all you see if a big ERROR model. It's quite brilliant.

hah, i remember when the times when you guys announced it required ep2.
that was in the times when i was a nut-case about mods that required hl2 deathmatch, until i found out it didn't ;3. so i tried it, loved it and i still do haha.

1. It would be okay for me if you mount EP:2, but I think you shouldn't.
2. I first heard of Modular Combat some weeks ago, when you released the last update.
3. My favorite combination of modules is Regeneration + Teleport (My favorite module) + Allied Vortigaunt

Very cool. I think the general consensus is that most everyone has Episode 2, but don't think that we should mount the content...

Im not sure if i have to answer the last 3 questions but i'll do it anyway :D !

1. i'll be glad if u add more monsters. Sometimes this mod is quite boring because i always fight the same monsters (i want fight Stridah :D). i think HL2 EP2 is a very common game between Steam users

3. My favorite combination of modules is: Long Jump with the Teleporter :D ! (and the aux power regenerator, of course)

Thanks for your feedback! We will be mounting Episode 2, as I will be announcing properly in an upcoming news post.

1. I have orange box,and I really love various monsters :D
2.I heard about it on july 27 and told it a friend on that day or the next
3.favourite combo is aux regen+teleport/longjump and maybe some mirv or healt regen