Matthew Dryden finally makes an appearance and talk a bit about the state of Modular Combat and the reasons why we've been so quiet.

But if you're were member of the Mod Fidelity community, you already know most of this. For those of you who don't know, we did a huge open beta where we invited in almost all of our active community into our private server to test things out.

This was a huge mistake.

This open beta stemmed from the fact that our QA lead had disappeared on us and we were left running around like chickens with our heads cut off. The problem was that we weren't getting the appropriate kind of feedback we needed in either case.

This is not to say that the the open-beta testers weren't helpful. They were incredible helpful, but we still lacked that structure that Joe brought to the table. Now that Joe has returned and is ready to help out again, we are ready in that area.

When your mod feels like it's floundering, you want to do everything you can to bring it back to active development. The truth of the matter is, the main driving forces behind the mod, Winston and myself, got very busy.

We both have gone through some serious life changes. I've moved, started a whole new life, got into competitive poetry (yeah, cool, eh?), and started a new job.

Winston is getting married. Yeah! Give him your congratulations in the comments below.

So you're all aware of this image: 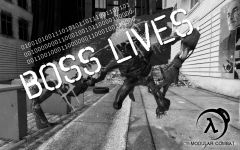 I will admit that I created this image to bring some hype back to Modular Combat. Not for you guys specifically, but for my team. I wanted Winston, Mason, Joe, and Jordan to know that I was back on-board and ready to go.

We missed the deadline.

No excuses. We did. I did. Steam won't install on my computer due to a bad sector on my hard drive that's been plaguing me. Winston is too busy with work, and Mason (our second, awesome programmer) is just crazy busy.

It's been almost a year since our last release. We have released because there is a huge crash bug that we can't seem to solve, no matter what we try. What happened is that we didn't follow weekly testing routine and suddenly we were getting crashes without stopping to figure what or where they were coming from.

Feature creep is a huge issue in our development cycle, and now we're paying for it.

So, is Modular Combat v1.77 every coming out?

Winston and I had a conversation about the state of Modular Combat and what we want to go with it. We both lead busy lives. We both have full-time jobs and tons of our responsibilities.

But when it comes down to it, Modular Combat is our baby. We both agree that there is unfinished business here. We both want Modular Combat to succeed. We want to give back to our community the same way they have shown us support since we started this over two years ago. We owe it to ourselves and we owe it to you.

Someone pointed out that Modular Combat is two years old. Wow. I don't have time to reflect on all the amazing things that have happened to us...but here's the skinny:

There's so many amazing things that has happened to us. We just wanted to thank you all for your continued support throughout the good and thank you for your patience during the quiet times.

We'd like to ask you for your continued support during these next couple of months. We will continue bringing you updates as much as we possibly can.

OK. I've told you where we are at...but what about you guys? These next couple of months will be focused on this crash bug, so I can't really bring you new updates.

What I'm asking is...what would you guys like to see from us on Mod DB? Would you like a few refreshers on what we've done with the mod? Would you like our thoughts on what's happening in the modding community?

What can we do to help you get through the next couple of months until we release?

Let us know in the comments below. We'll be in touch soon.

nice to hear from you guys.

do whatever you want, but KEEP GOING!

Thanks for your continued support!

Grats, Winston!
I'm glad to hear from you. I don't mind a late release date so long as the devs are all alright. I understand that Modular Combat isn't your number one priority.

I'd love to see some screenshots of the new stuff in action, but it might cause unwanted hype from those who didn't get into the beta.

Yeah, I think I can do that for you.

Congratulations Winston, and it's great to hear something from the mod, and in such a well spoken manner. I also think it's good you guys did have a valid excuse as to why it is running late, and I respect this completely, keep up the great work guys, and can't wait to play...

We've always tried to be as honest, open, and authentic as we possible can when it comes to Modular Combat - especially when we screw up. Or rather, when I screw up. >_>

do module reports or something to tide us over, where you explain how you made the module? how its used? and why it is epic?

ps: whats up with the servers ? there is just one, why?

Correction, there's only one server the community plays on, and thats for good reason, you need to realize accounts, and therefore characters do not go from server to server, so once a guy gets set up on one server there's a small chance of the other servers getting that player...

but mirroring accounts across all official servers has been thought about for quite a while. it may happen, it may not. other things are more important right now though.

We'll have a few servers running for our next release.

You do realize that the site broke, which is probably why some members (like I) couldn't get in contact and find out what happened.

Meh, I ended up having other games to play, as I can't always stay put from 1 game.

Well, thanks for coming back!

I have vids of me beta testing. Would I get in trouble for "leaking" them?

yeah, you might wanna keep those to yourself for now.

I dont play anymore since you ruined the mod

I'm sorry to hear that...is there anything we can do to fix it up for you?

Ah! It's good to see your name in our comments!

Don't bother with new screens or anythi ng else, just get the game running and bug free, that would be my wish!

You forgot all the new maps ;p
Great hearing it officially that the mod is getting continued

Haha, thanks for the awesome support with your maps, Jack. We can't wait to see what's up with those.

Great!...
Good to hear that MC is back on the trail, and is heading the right direction, but damn my bad karma... The day of release I am leaving for 5 months on a student exchange and they don't have internet there... Bad karma, BAD -_- ...

Good to hear from u.
And gratz Winston.

I love what u have done so far :)
Keep it up, and the creeps down

Congrats, Winston! Also, it's good to hear that MC is not dead. Keep up the good work!

Good luck to you guys.
And lets hope you get everything resolved :]

We already have a plan.

In the way of requests; work on balancing things as a priority, The fun thing is to have a suit that just dominates, but give it a weakness in the sense of a different suit setup. Rock paper scissors has always worked, and when you get two rocks(or similar suits fighting) player skill kicks in and adds in fun. I know I love going toe to toe with teleport. It is crazy fun. Or see two tanks duke it out. Mix it up, and balance how suits are done. Stay alive! I've greatly appreciated your genius in designing this great game.

We are working with a systems designer to kick Modular Combat into shape. Expect a lot of new amazing things very soon!