This update brings a redo of the infantry system, new flight modelling for ballistic missiles, updates to FLINT, and more!

This version brings numerous changes as a transitional step to prepare the mod for the upcoming 4.0 release in the future, but is a great update in its own right.

Some of the key changes include that the infantry role has been completely redone, tactical ballistic missiles have new Advanced Flight Modelling, the F/A-18E Super Hornet has been added, and a new model has been added for the AIM-120C-7 missile.

Additionally, there are numerous generic performance & stability improvements over version 3.2

All in all it's a great update, preparing features for an even bigger MW Mod 4.0 update in the future!

This is a full version of the mod. Even if you don't have the mod at all this will install it as 3.5. If you do have a previous version, it will update you to 3.5.

NOTE: If you already had any version of the maps from 2.5 or onwards you do not need to redownload the maps.

Due to the increasing complexity in the simulation of missiles, aircraft, artillery, and more- Modern Warfare Mod 3 requires a higher-end system than specified on the original World in Conflict system requirements.

At minimum, your system (including video card) must maintain 27 frames per second or higher, and 40fps or higher is recommended for a good gameplay experience. Below 30 fps, numerous homing projectiles may miss their targets or fail to perform altogether. Try lowering your graphics settings if you cannot achieve enough frame rate. 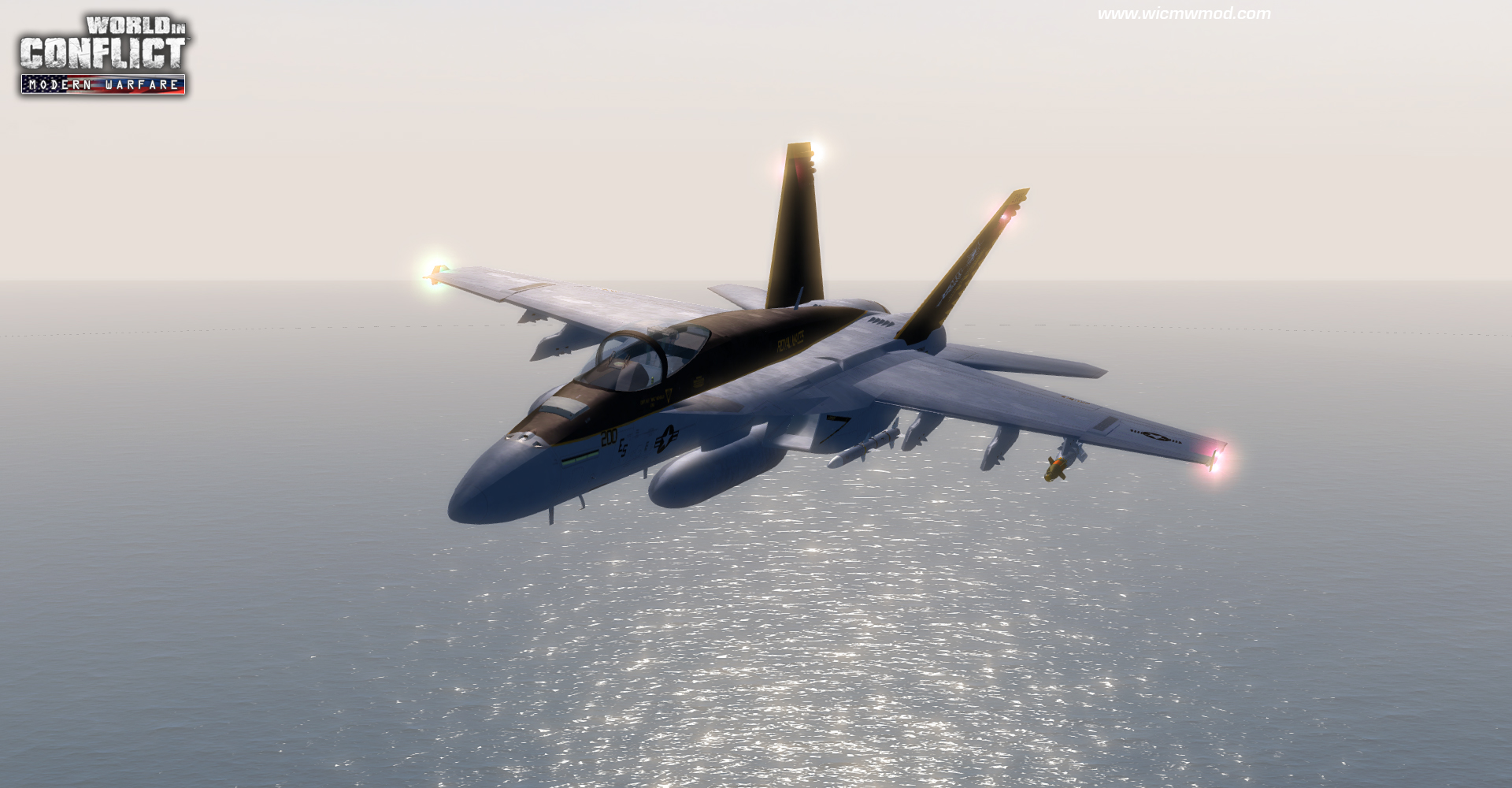 - Fixed broken LOAL auto-pilot routine for AIM-9X. Missile no longer dives into the ground when lofting.
- Reduced drag on R-73M missile.
- Reduced reload time for 9M119M Refleks missile to 90 seconds (from 120).
- Improved guidance for 9A4172 Vikhr M missile when fired at longer range.
- Removed outdated unit description on Mi-28 attack helicopter which advised the user to right-click on enemy target first, prior to attacking (this is no longer true).
- Slightly improved maneuverability on Mi-28N attack helicopter.
- Significantly improved proximity fuse performance on the Russian 57E6 Pantsir S1 missile. Doppler radio frequency scan code is now implemented.
- Reduced the price of 9K79 Tochka ballistic missile for Russian air role to 10 TA each. 3 of them can now be purchased at once for 30 TA.
- Completely reprogrammed the MGM-168 ATACMS missile to match real life data. Missile is now a quasi-ballistic maneuvering SSM, not a ballistic missile. Missile drops near-vertical during terminal dive.
- Increased maximum TBM engagement altitude for S-300 SAM.
- S-300 SAM will now alert the player when a hostile anti-radiation missile has been detected. 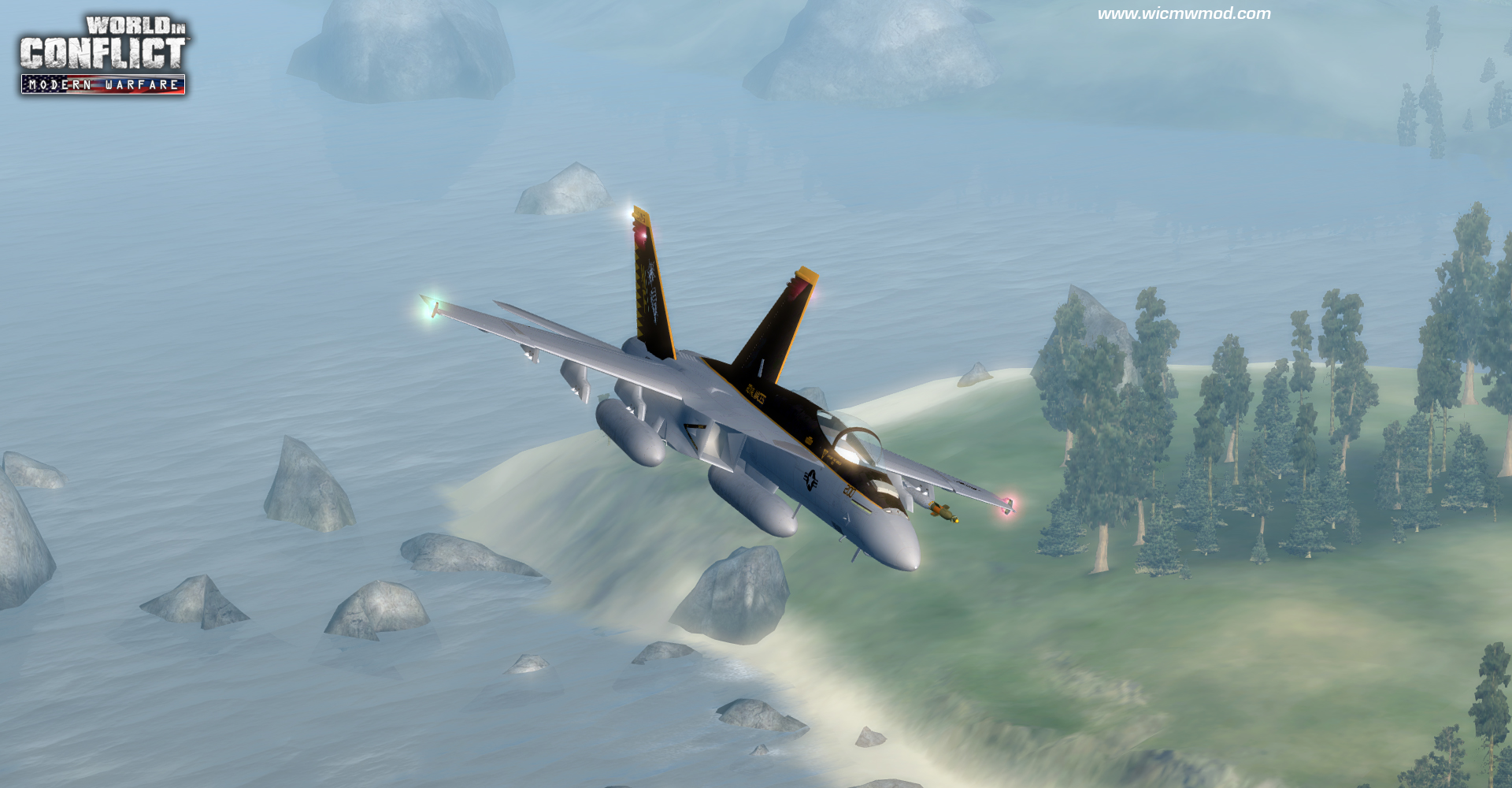 This mod looks awesome , will have to download a bit later

Is there a way i can get the humvee and apc's to fire command using the fire button
P.S how do you control the jets from farp?

And the XP users ? Still there any version for XP ?

Will the LAV-AD on your Dev track be replacing the current US M163 equipped with the C-RAM?

C-RAM is already removed from the game (there's only Avenger).

LAV-AD will be a new unit being added soon -- it is currently under development. Initially, it was going to be included in 3.5, but delays in development pushed it back a little bit.

Oh alright, cool. So will the LAV-AD function in a similar manner as the Tunguska / Pantsir-S1, in that it can fire both AA missiles and its equalizer 25mm Gatling gun?

LAV-AD is not an automated system and it cannot engage incoming ordinances -- its reaction time is much slower.

Ah, yeah I forgot that the Pantsir could do that, thanks! Btw, which role would it go to? From what I recall the ones who use the LAV-25 and its variants are the USMC, so will it go to the infantry role? Will you also be replacing the Blackhawks with the UH-1Z Venom for the infantry air transport?

Yes it's going into Infantry role.

Okay, awesome. So that means the US Army get the Avenger. Will you be replacing the Stryker transports with LAV-25A2s for the USMC? Will any of the Strykers stay or be replaced other than the Stryker MGS? Considering that Stryker and LAV-25 variants are rather redundant, such as ATGMs and Mortars.

Sorry if there's so many questions and if not many of these are planned, its fine. I'm just excited and very happy about what you guys are doing and have done with the mod.

No worries man about the questions :)

The Strykers will stay -- you'll note that they are listed under the Armor role. Strykers will be available for infantry to buy out-of-role from the Army/Armor panel as an alternative form of transport. The primary infantry transport is still AAVP7A1.

As for mobile mortar, currently we're still using the old M125 Mortar, no immediate plans for replacing that just yet; but I do eventually would like to have it swapped out with LAV variant for USMC compatibility.

The Stryker ATGM is only available via tactical aid for now (though it will be under review later, including upgrading TOW missile to use FLINT).

Awesome! I can't wait! Thanks for answering all the questions too. I would've liked to see a LAV Variant equipped with the DragonFire system, which won't be happening because its budget was cut and it seems like the US Army instead is using the Cardom System on their Strykers instead.

I was also wishing you guys would use the LAV-25A2s instead as its a more.. say "balanced" counterpart to the Russian BTR and BMP-2/3(?). Though I can understand as well that it won't be an easy switch considering all the work you've all done on the Strykers. No matter, AAVP7A1s are still a good vehicle.

I'd love to see TOW using FLINT, that'd be awesome. Are you only considering TOW ATGM to use FLINT or all ATGMs?

pantsir in 3.5 is not using its cannon when engaging aircrafts

I thought it said Codename: Kittens! I got all excited, then stopped being dyslexic and realized it said Kilter. Disappointment. :c

Played 4 matches as Russia lost 3 won 1. My impressions of the update:
1- New Inf system is nice.
2-Tor missiles ain't hitting **** I won when I spammed Pantsirs.
3-HARM missiles are invulnerable in all matches I wasn't able to hit 1.
4-Russian AI plays like a 4 year old.
5- Airplane system as well as physics now looks way better.

Are you the people behind q3:modern warfare ?

why is pantsir not using it's autocannon when engaging aircrafts in close range?

Is s300 range much longer than patriot? sometimes patriot batteries will not engage enemy aircraft.