Time for our monthlyish recap of the mods progress! Main topic is the progress of our map, which although a bit slow is still steadily going forward.

Time for our monthlyish recap of the mods progress! Main topic is the progress of our map, which although a bit slow is still steadily going forward. We tested out couple of new features, the train and the glowing plants and they do give a nice boost to the maps ambiance

The concept for the train came to us in a late night conversation that started with something like It would be cool to have a working monorail transit system as up until then I had thought to only put in the tracks and broken immobile traincarts. My brother then said at one point that why not make the train with physX car and the rest is history. Next day we had a train that goes on a track.

There are some issues with the train and AI, mainly because the tracks are builings that the traincart is in constant collision and they don't count as roads AI can't understand to just drive forward and there does not seem to be a command to just order it to drive on with full throttle. Since our map will be post war themed it is not that big of an issue as the automated controls may have deteriorated and the tracks will be in a bad shape anyway so the trains wouldn't be moving around their whole circuit anyway, but it would be cool right. It might also be impossible given how Arma AI handles driving and obstacles, but we keep looking into it.

Up until now the map was supposed to have all/most lights off and pitch black nights if power grid was not restored and power stations turned back on. But while running through the dark forest I thought if there could be something to break the monotonous darkness and while pondering it the movie Avatar came in mind with its glowing plants and I thought why not try it. The idea is not to try to fully light up the jungle but to have a few elements that break the darkness here and there and maybe even react to player/unit vicinity so they could also be used as a sort of an warning if something has been close by recently.

Emissive materials could also be used on the animals too, like on firefly-like bugs and maybe even on some bigger creature, but have to be careful not to overdo it. We have not yet had time to give much of a thought to the alien fauna roaming the jungle, but there has been some discussion if we should implement some dangerous animals too. It would perhaps fit the concept and make the map a bit more dangerous but would it be worth the effort? This is still an ongoing discussion but also something that we consider "bonus" content that is not very high up on the list. 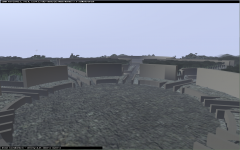 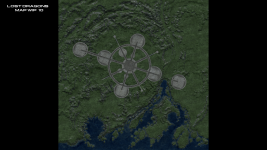 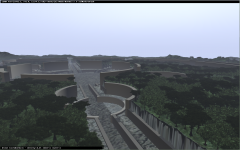 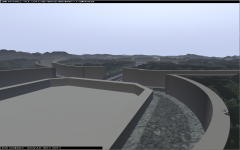 The basic layout for of the massive Dragon complex is pretty much laid out now and I've been working on building concepts and urban layout plans trying to figure out all the things a military industrial complex like this would require and where to put everything and the most hardest one, what should everything look like. Although there is a strong vision behind the concept, it is still really challenging to put everything together so it would look like everything belongs to where it is and more challenging to come up with everything that would be required to build massive warships like the Dragon. What would be produced where and how much personnel massive base like this would need and where do they live and spend their off duty time? How is the base protected? Powered? Supplied? Planning all this takes time but we want to make it look and feel like the place could have been functional and then there are some engine limitations to consider. How many unique buildings can we have, what parts can we re-use, how much enterable buildings the engine can handle and so on. 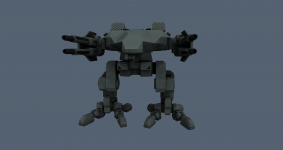 On the model front the Anubis combat walker is soon joining the Old War asset range. The model is UV mapped and "just" needs to go through the tedious phase through Armas tools to get it in game. We have plans to make every unit have their own characteristics and quirks but for now we are quite content on getting new units and vehicles in game as we can't really think of balancing them without any ingame feedback to work with. Compared to the WK-209 the Anubis will be faster, a bit more agile but WK-209 boast better armor yet they both will have similar weapon config.

So whats next then you might ask? Well, I am still focusing on the map and the assets it requires, I do have a new set of armor under work as well as a little break form the mapping is sometimes required. Duke Nathaniel has the Anubis soon out and has a few new vehicles under work and he also planned on doing a bit of redesign on the Hastur Corp combat drone (the orange colored) and Turmio75 our code wizard tries to squeeze out time to work on the scripts and get the main gameplay mission started.

Oh and if you missed it, heres how the factions are planned out:

Hastur Corp : (The Orange and cyan colored salvage corporation and playable faction in the upcoming gamemode)

These two will have their own arsenal that the players begin with as they arrive to the planet.

Then there will be two factions that once in the past waged war on the planet:

The yet unnamed faction that attacked the planet (What we sometimes call "Blufor" of the war, misleading yes, but is so because Duke there who models the "Blufor" corporation also models these)

I'm not a fan of ARMA games but gosh, I'd buy it just to play this mod once it will be done!

Any chance you make a standalone of it? Even a paid one? :P

:D Great to hear you like the concept! Standalone you say, well why not one day. It would be awesome way to expand the Lost Dragons universe for sure!

Trains in ARMA? I thought thats not possible. Is it possible for those monorails to stop at each station where you can board them? Would be pretty handy in certain situations.

As it is now, the train would stop as soon as the driver steps on the breaks hahah! We've already talked about trains you'd be able to walk in while they're in transit too, it may even be possible to make a fully automated track. We'll have to see how far more we can push the game engine to the limit!

Trains in Arma! Or "trains" as it is a car that is forced on track.. I did some testing with AI and at least for now AI cant drive it. Mostly because the train tracks are buildings and not roads and the AI driving mechanic tries to evade them. The train has no steering so the AI just keeps jerking it forwards and backwards when commanded to drive.

We have not yet found a direct script input to force the AI driver to just drive only forward but if we do then the train could indeed be automated. We will keep investigating the matter, but it is not top priority right now as the train itself was just a quick test if the technique could even work.