This article looks at the different factors that affect how missions are randomised in Distant Star: Revenant Fleet.

One of the challenges when creating Distant Star: Revenant Fleet has been to balance the roguelike elements with the RTS gameplay.

When you think of the roguelike sub-genre, you tend to visualise randomly generated tile-based dungeons. From a design point of view, the turn-based system on a tile-based map gives the designer a finite number of variations to create (and test), while still offering the player a good amount of variation in gameplay. This is a good balance, which has made the genre popular with both designers and players.

However, when you move to an RTS-based combat system, this becomes more complicated, particularly when you’re talking about multi-ship space combat. For example, ships can move anywhere (although there may be obstacles), there’s a variety of weapons that can be used and enemy fleets need to be randomised to provide a consistent (and unpredictable challenge).

All sector nodes generate a story event when you fleet travels to it. It can be one of the following; 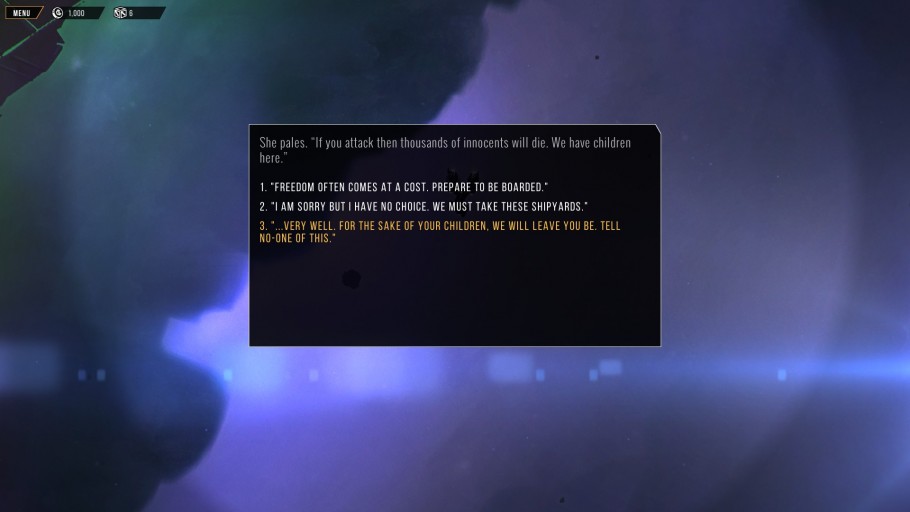 Your choices affect whether or not you’ll jump to the next system or enter into a combat mission.

The choice outcomes are sometimes also randomised. For example, one story event may offer you options on how to infiltrate a station. If you choose to send a spy in, they may or may not be successful in this attempt. If they are, you get a reward (which can be credits, weapons, upgrades or even a ship). If they fail, then you could be faced with a mission to capture the station or one to survive an ambush by an enemy fleet. However, in another iteration of this story event, choosing the same options may not have the same results (your spy may succeed where they previously failed).

There are over 50 story events in the game right (as of v0.0.1.1), with over 120+ planned for final game. Many of these have a randomised structure or different outcomes, meaning that it will take quite a few playthroughs of the game to experience them all.

The examples below are different missions, although they use the same mission type (Ambush). In the first example there were several more waves of enemy ships to defeat (and those waves are comprised of different ships each time). 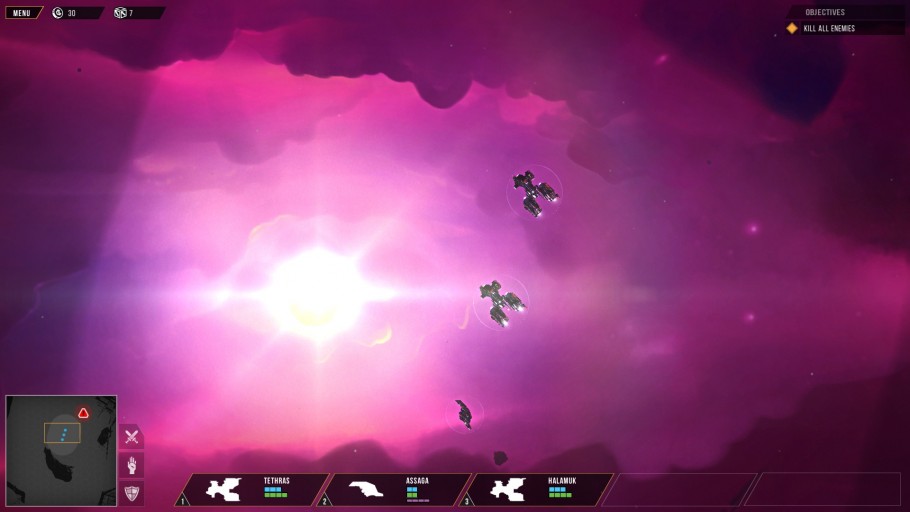 In the second example below, the same mission map was used, but it has been rotated. The background is different and although the mission type is the same (Ambush), this iteration involves the pirate faction, rather than the Orthani. 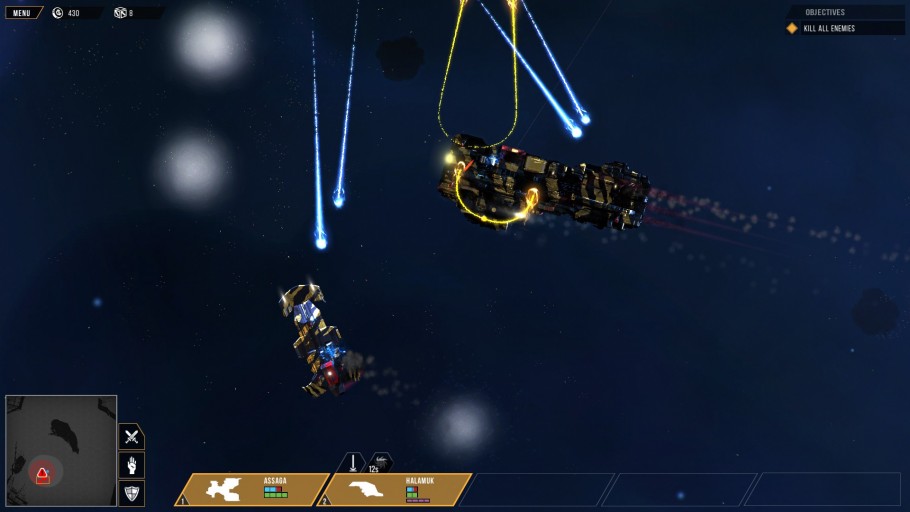 All the missions are short and face-paced and there’s sufficient variety to ensure that each encounter is familiar, without seeming repetitive. There are 15 different backgrounds in the game just now and each mission type has around a dozen different map layouts available for it. Each potential combination of these can spawn different start locations for the player, different objective locations and different map features such as layout changes and soon, the introduction of turrets and mines!

The enemy fleets you encounter in each mission are randomly generated when you enter the mission and vary depending on a few factors;

If you prefer playing with only one or two ships, your missions will adjust the enemy fleet your encounter to ensure the experience is fair (and more enjoyable). Similarly, if the mission involves pirates, there will generally be more ships spawned as pirate ships are lower tech and don’t use shields. It’s definitely worth trying the game a few times with different fleets to see which style of play you prefer, although as you progress through new sectors, your fleet will be expected to grow in size to deal with greater challenges. 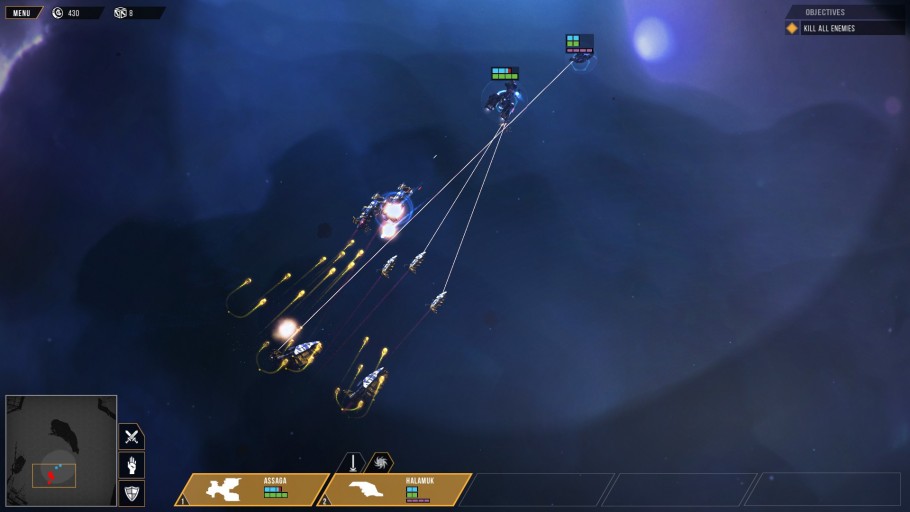 As your fleet progresses through the sector and galaxy map, your danger level will increase (and it can also be affected by choices in the story content). The higher the danger level, the more powerful the enemy you will face. Within each mission, there is further randomisation to ensure that gameplay remains challenging over time. You will face enemy fleets comprised of different ship classes, spawning in different locations, spawning drone swarms or even pirate fleets!

There are a number of different mission types that can be spawned by story content. These are all designed to be short, fast-paced combat encounters

Capture
The capture missions involve capturing one or more stations in the zone and eliminating all enemies in the process. Occasionally these missions can be avoided by selecting a non-combat story option prior to the start of the mission, but this is not always available (or successful!). Enemy fleets will spawn at both predetermined locations as you approach, and at random locations in the map before hunting you down. 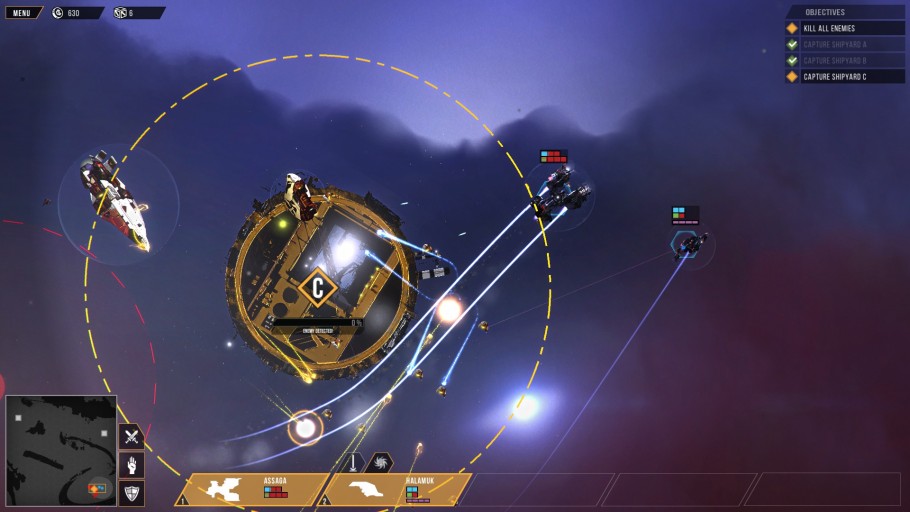 Ambush
Ambush missions take place in a smaller map type where you will face multiple waves of enemy fleets. As with other elements of the game, the composition of the fleets and number of waves is randomised each time.

In addition to being ambushed by the Orthani, you may instead encouter pirates! Pirates operate different to the Orthani – as scavengers, they can use any of the available ships in the game as well as several of their own ships. Pirates aren’t as technologically advanced as the A’kari or Orthani, so their ships don’t have shields and their engines will leave a trail of smoke behind them. But what they lack in technology, they make up for in numbers, so expect to face off against larger fleets in pirate missions.

There are a number of new mission types that will be added to the game pretty soon, and unlike the current missions these can all have “soft fail” outcomes where you fail the mission, but can continue.

Defence
As the name suggests, the Defence missions require you to defend a static point in the zone against enemy fleets. If the asset you are defending is destroyed, then you fail the mission.

Hunt
Your fleet has to hunt down an enemy fleet and destroy it.

Escort
You have to escort a friendly NPC and defend it against attacking ships.

We’re just about to move into Beta so there’s a bunch of content and features still to come, but here’s a rundown of what to expect.

Mission Randomisation
There will be a number of new mission types coming with future updates.

Map Randomisation
On top of AI improvements that are being rolled out with each update, you can expect more map backgrounds and more obstacles in maps (such as minefields).

AI Randomisation
As ship weapons and attachments are added to the game, these become available to enemy fleets so each encounter will be slightly different to the one before it.