Overview about the more complex and famous new gametype of Frontlines R3L04D. With videos and a tutorial. 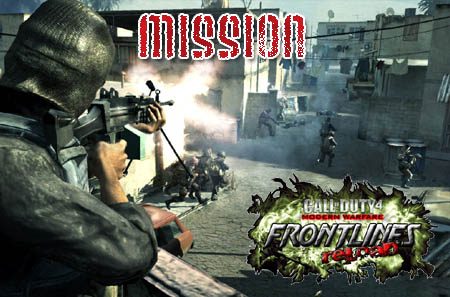 This gametype is the more complex gametype of Frontlines R3L04D, which for sure is the number one gametype in the resquests at both of my servers and it's not difficult to know why. It's different, both teams have lots of stuff to do, have intense gameplay, paratroopers landing everywhere, lots of action and even an amazing nuke airstrike.

What more you will like to have? And EVERYTHING is dynamic! works in ANY cod4 map already done, or what will come in the future (if the mapper follow the IW rules of course). Works like a Mini-WAR like game, when both teams fight for complete several objectives at the SAME round, no-reloads!

Below it's a video who shows my team completing all the objectives and winning the round and the match. Unfortunatelly not many soldiers managed to escape, but we won! :D

First, lets look about all the objectives of the strike team.

If the team lost the Landing Zone the next soldiers will respawn again in the ground and without the bombs. So have the control of the Landing Zone is very important even after destroy both targets, falling from the sky the team will have a great view of the battlefield and will identify where the enemy's defenses are aside can land really anywhere, which will make the team complete the next objectives faster.

The defenders will also want to recover the Landing Zone to minimize the danger of enemies falling behind the defense lines and upside rooftops.

Then the strike team next objective is stole these Docs while the enemy will try to avoid that. Both teams can get the Docs to help in complete his objective. Once the strike team put his hands on the Docs, a Extraction Zone will be marked with a Green Smoke to carry them until there to pickup the Docs.

Once the Docs are recovered is ordered a Nuke Strike in the current location and is given the order to all the strike team to Retreat to the Extraction Zone to be rescued before the explosion. At this point there's no more respawn.

Now how the hell I score in that gametype? For each objective completed the Strike Team get relative points, and he is the only team able to score. Then we have a second round when the teams change posititions and all is played again in different sides. In the end who have more points wins. Below there's a table of points.

So it's question to do your job with perfection, and not just rush for the objectives.

During a War the strike team must complete all objectives to conquest the territory.

Above it's a video of a final battle of a War we played on last sunday, and was just a Mission gametype (remembering it's a War in Battles Mode which is all random). In War the default config turned off all obituaries messages to make it more real, so that's why you will not be able to see any in this video.

So are you READY for the first Frontlines World War?

The First Frontlines World War will be on August 1st, Sunday at 18hs GMT

Will start at 18hs GMT with around 10hs of gameplay, which will give time to everyone from Europe and Americas participate together in a HUGE war.

Join the Frontlines World WAR at the Global WAR Server ! Only default maps! You will only need the mod which will be installed once you connect to the server!

Until there play at our servers to learn the gametypes and get highest ranks for the War! At Blood Culture Server we always have people online around 01:00 GMT, with the Blood days every tuesday, friday and sunday... let's train for the big war together!!!

See you all on the Battlefield!

wow! ill be there!

see u on the server then! :D

thank you very much for this

Wtf? Is the map in the video rebuilt or ported from MW2?

yep! really nice convertion from MW2! but it's only at the Brazilian server right now which have over 90 maps in rotation. ;)

With more people playing at the GWS I'll add custom maps to the rotation. You are wecolme to play with us at GWS or in Brazil if you don't care much about ping. :P

heck of a lot of spawn killing

the defender's spawns are random for around 200 meters of the targets, so might be possible to spawn in front of an enemy's squad when they are close of them.

but don't need to cry, this is something common in ANY FPS game. ;)