A little update on what's going on with Missing Information!

Most of you probably think Missing Information is long dead. We realize we haven't put out new media since September 26th. We have no real excuse for this, except for the classics like our lives outside this modding world is interfering with the development of 1.6.
Yes, we are calling 1.5.2 for 1.6 now instead! It seems the size of this patch is alot bigger than we anticipated it would be, and really outgrew the original scope of the patch.

We lost contact with one of our team members around October last year. This has resulted in a further delay, forcing us to rethink part of the Borealis that we were putting through a major update. Valve released an update for the SDK that left it more broken than working which left the team with very little motivation to work with the SDK.

We used to have an internal release date, which we missed by a long shot because of these events. Currently we do not have an release date for the next version of Missing Information. However to keep people a bit more posted on our progress we have joined the majority of mainstream mods, and registered a Twitter account where we hopefully will post updates more often! Be sure to follow @Gabe's Love Tub on Twitter! (@gabeslovetub).

One of the Desura developers contacted us back in November. They offered us to get our mod distributed on their Steam equivalent for mods. Desura was recently released to the public which means that you can now download Missing Information through Desura! Once we release a new copy of Missing Information, Desura will take care of updating your copy if you've acquired it from their service - just like Steam!

One of our loyal fans, cdlink14, posted a torrent of Missing Information 1.5.1 on our Moddb page. We appreciate the amount of support we have been getting over the last couple of years! The torrent can now be found on our official site. The torrent contains a full version of 1.5.1 merged into it.

Finally we would like to thank all our loyal fans all around the world, especially those of you that voted for Missing Information as mod of the year in 2010, even though we didn't release anything! This was something that made us really proud of our fans, seeing how loyal they really are - despite everything.
We look forward to releasing a new version of Missing Information in 2011, and hopefully show you more of Episode One!

Oh, and here's two new images from the Borealis :)! 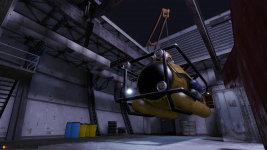 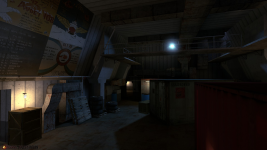 WOAH! Calm down dude! You'll pass out from this epicness!!

You know, im sure this mod would get more attention if the mod website url wasnt 'love-tub.com' lol

Please tell me do you oppening of raising the bar in one of the following versions of modified?

It will come soon