All of the things that are necessary to transition from a mini-game being over, to the game being ready to start the next mini-game or return to the game board is now finished. Included in the article are screenshots and a description of those things.

I spent the past weekend finishing up all of the things that make up the ending of a mini-game. When the game is over, a dialog pops up that says who wins and players are taken to a results page that shows who placed where and how many extra tickets (the equivalent of Mario Party coins) that the player has earned. They are then taken to an overall scoreboard to show the rankings for the entire game. 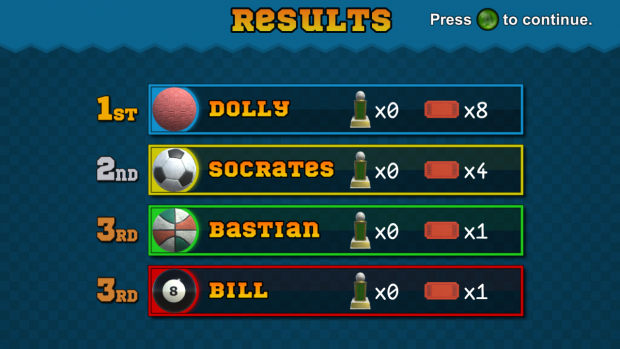 Shown above is the results page, shown after a mini-game. The background is the color of the winner's player box. You can also see that the balls now have names. Those may change. I just tried to find names that match the first syllable of the ball type. The choices with that method of naming were pretty limited, but I do want their name to be in some way connected to the ball.

You can see the trophy and ticket count. Tickets were mentioned in the beginning of the article. Trophies are the equivalent of stars in Mario Party. Since the images of these in-game items are tiny in the results screen, I have some images of the models to share that will give you a closer look. 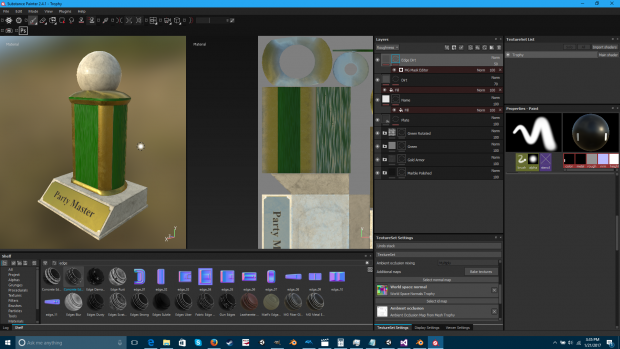 The above screenshot shows the trophy in Substance Painter. Since earning a trophy is a primary goal of the board game portion, these will be displayed more prominently, but less frequently, in the game than tickets will be. So it was important for me to get this looking fairly good. I'm pretty pleased with the results. I did change it a bit after taking this screenshot (the thin green band at the top is now black plastic), so it may undergo other tweaks as the project goes on.

The ticket was made from a piece of clip art. The clipart wasn't centered correctly, so I used GIMP to center it and pad it out after modelling it. You can see the modelling and texturing process in the two screenshots below. 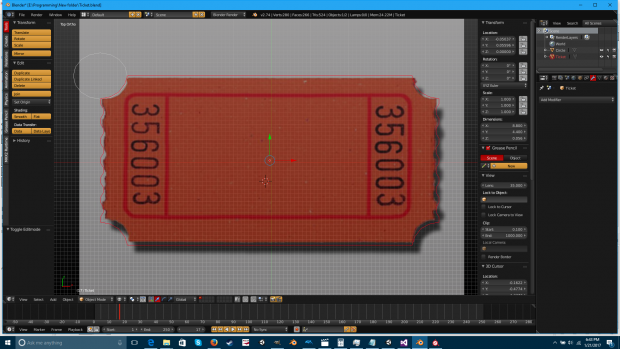 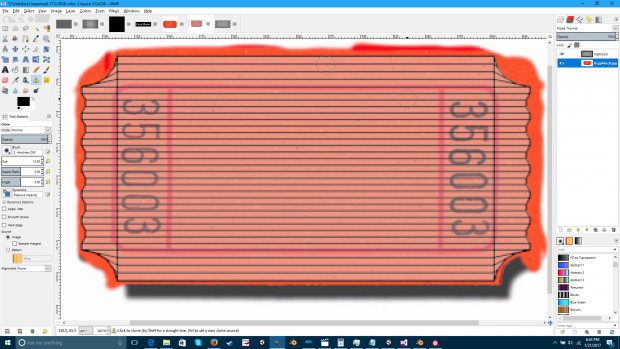 The model shown in the screenshots is the one that was used to take the static image for the results page. It has has quite a high number of polygons for what it is. So I also made a lower polygon version in case there is a need to have many of them on the screen at once. Say for example a mini-game where you are running around and collecting them. 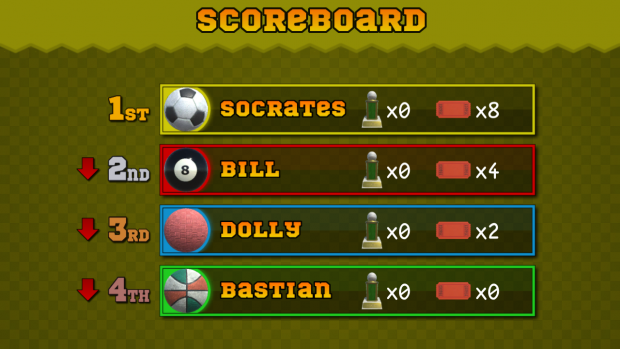 Here is the scoreboard. I'm not pleased with the way the yellow color looks. So I'll probably alter either the base yellow that creates it, or make an exception and just use a different yellow for the results/scoreboard pages.

The primary difference between the scoreboard and the mini-game results page is that the arrows are there to show you the change in your overall rank as a result of the last mini-game.

Finally, a look at what happens just before the results page shows. In the shot below, you'll see the text display telling Socrates that he won the match. You can't tell from the static shot, but Socrates the soccer ball is bouncing up and down because he won. I'm not sure whether that's an animation that I'm going to keep or something that I'm going to change later. For now, it doesn't bother to check whether they player is grounded before moving them up and down by one unit so the look is pretty artificial. It doesn't look bad, it comes across as more of a pulse than a ball bouncing. As time goes on and I see it in action more, I'll decide whether I want it to stay. Hopefully I'll also have some video coming up soon so I can get opinions from you guys. 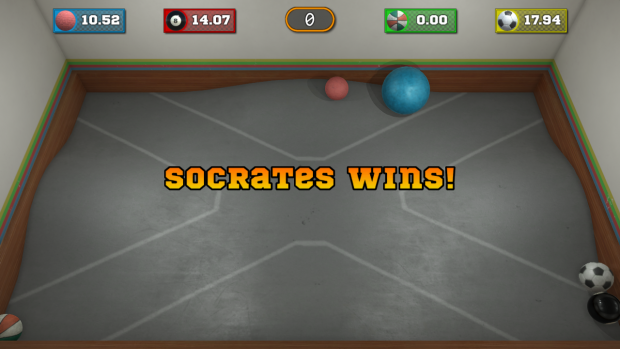 For the rest of the day I'm going to try to get as many of the opening camera animations in as possible. I'm hoping to use get a generic framework in place that I can reuse for many mini-games. Several of them have different requirements than others, but I think a pattern will emerge as the mini-game number increases.