It's Friday, which means it's time for a weekly Snapshot! They are usually on Thursday, you say? Maybe it IS Thursday, and we have gone back in time... 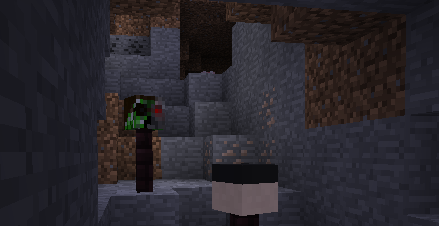 Notice: An updated ‘b’ snapshot has been pushed to fix a crash & incorrect golden apple regen. More crazy mid-week holidays in sweden again, to celebrate Sweden Day. We’ve been working hard on more Resource Pack stuff but it’s not ready yet. In the meantime have some bug fixes!

The red thing's there again, behind the stone.

ok that red thing is probably a mob... but why no info on it.

I have yet to find anything in the texture files.

Creeper skull on a stick. To scare off the other creepers.

It is the docm77 youtuber - it is a reference to the UHC season 11 which dinner took part of.