Introducing a new weapon, scrap metals that can be harvested from enemy robots in the single player mode. 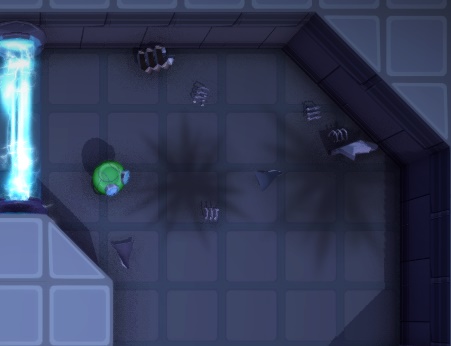 Today I had more time than usual, so I started off by doing a couple of quick tasks, I made a couple more robot pieces to explode from enemy deaths, implemented some of those to explode in the multiplayer player deaths and made a little script to randomize the scale of the burned ground that spawns from death robots.

Next up was something that has been on my task list for a long while, some sort of indication for pickupable weapons. That’s something that I would definetly need to identify the pickupable scrap weapons in contrast to the junk that spawns from dead enemies just for permanence’s sake, but it would also help on the multiplayer to more easily identify straggler weapons in the set. So I made a little particle effect that rotates around the weapon and implemented it in the code so it would appear if the speed of the weapon went low enough with it being pickupable.

After that I went on to actually create the “scrap weapon”. My idea for the scrap weapon is it being a weaker one-off weapon that wouldn’t bounce or be reusable. The player would be able to obtain it by dash-bumping into enemies in the singleplayer and it would be stackable by collecting more than one. Each extra pickupable scrap collected while holding a scrap weapon would add visually a scrap to it and increase it’s damage by 1.

I extended it from the original Weapon script and overrided a couple of specific functions. For that I had to reorganize a couple of the functions to make sure I could just override the necessary part to do what I wanted while keeping the rest of the weapon logic. I made it stop and destroy it’s weapon script when it hits something (or someone), making that it’s parent (So if it’s moving it’ll take the weapon moving with it).

I like the way it’s looking and feeling to throw

Tomorrow I’ll make the enemies have a chance of dropping it at every dashbump they receive and see how that feels. I have to playtest it a little bit but I have a good feeling about this!