Changelog is being updated often, to get a more in-depth look at what's going on, have a look at it here:

So, 2.2 has been out for about a month or so at this point. Season 6 is over. Damn, what a finale. Can look forward to Winds of Winter now. Anyway.

So for 2.3, there's some fairly big changes coming. The Essos troops are once again being overhauled, I am still trying to find something I'm satisfied with. And I can't. Not going to stop trying though. Various texture updates have been applied, giving the whole world a more grimy and used look. Same goes for armors.

I've added some more explorable locations, so the Rhoynar cities are finally getting some love. 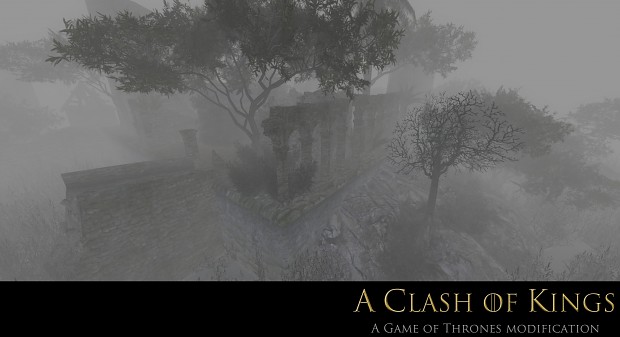 The Ruins of Sar Mell

Lots of small other changes are happening. For those who liked the Telltale games, yes, House Forrester has been added to the mod. Other houses have made their appearance of re-appearance as well.

Many weapons have been made more viable.

Also, I'm tinkering with a sort of template for markets/septs/dothraki camps/temples et cetera. The template is fairly simple so far, and still needs heavy tweaking and feature adding. But it's going to add a lot of depth to the game. 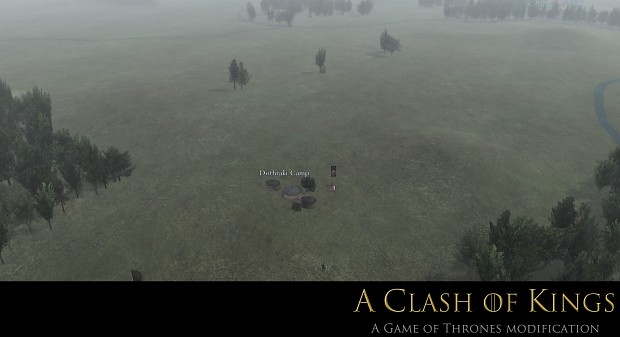 The camp as shown on the map. 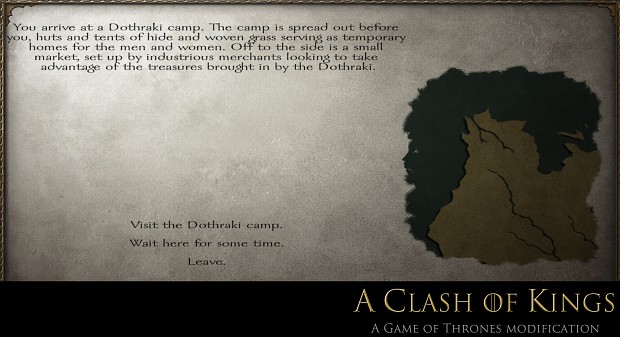 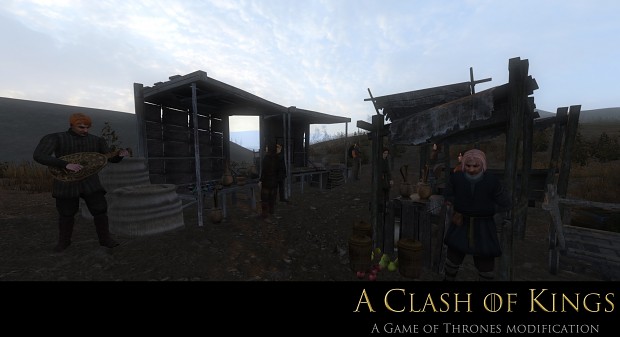 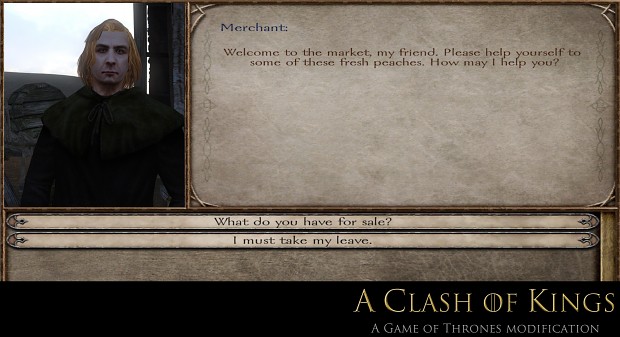 The merchant. He mostly sells wine at the moment. 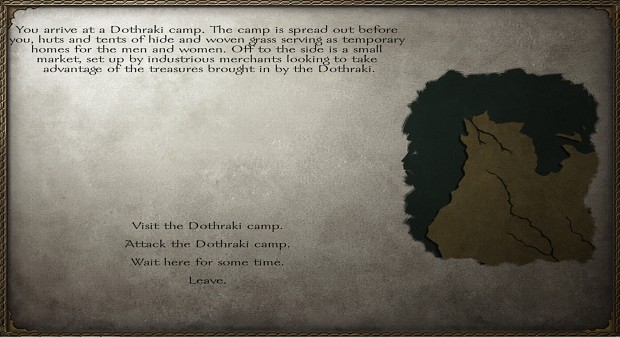 If you bring enough men, you can attack the camp.

That's it for this time.

Will the troop trees viewer be in the next version?

man no need 2 b so rude my mayn

Could you make more recruitable sellsword companys. Or even make it available to join them just as a sellsword.

So, you plan on adding the Wall anytime soon? And perharps, the Nightwatch?

Both are already in of sorts.

I think hes talking about the way AWOIAF has it

Thanks for the update, looks great :)

Hello, have you thought in adding the start as king\lord script? I think many of us would like to play as a character from the Show/books.

Or be able to create our own house name and banner(more costumization)....maybe

Looking good :) Hey, could you add like Kingsguard for every faction with a king?
North,Baratheon factions, Iron Islands, and Targaryens :D (i would like to see the Targaryens Kingsguard like in the series)
Also, could you add more banners? Not many more but just a few.

Both ideas seem neat, create a super elite unit for the king's own army! Sadly we only know of the Kingsguard for the Seven Kingdoms(I'd assume they could only appear to guard King Tywin), and Renly's Rainbow Guard(goddamnit Renly...), but maybe just make up something for the rest

The King's Hearth or Huscarls for the Iron Islands. Targaryen Kingsguard.

Yeah, good idea, not necessary all those golden armoured guys from the shows, but some elite bodyguards in fancy armours and very limited numbers would be great.

didn't know about that :) thank you for the information

What would be the difference between Targaryen Kingsguard and the post-Targaryen, Baratheon/Lannister Kingsguard? They're both the White Cloaks.

House Forrester I LOVE YOU

Awesome! Will be be able to hire Dothraki at the Dothraki camps? I'd love to make an army of them. Plus, I believe in other mods, your army can lose morale when crossing the sea, this might could be done to affect the Dothraki alone! If you want to show them being scared of the poison sea anyway :P

Also I'd like to suggest that maybe a way of doing things in Essos....allow them to have unique factional soldiers. But once you go above their basic troops, they become expensive and rather elite. The armies of the Free Cities could then mostly be made up of Sellswords, with an elite backing of their own unique soldiers

Anyway, just want to say that 2.2 has been an amazing mod, and I look forward to see what you do with 2.3 :D

That morale system for the Dothraki is a great idea :D
Now, talking about Essos and all that stuff i can't say much because i don't travel that much to Essos to know. The only thing i know is that 2 factions there disappeared. Also in like the 15th day(maybe less) Kings Landing was lost for the Tyrells X)

Still hope for returning of other uniqal troops, and maybe mercenries camps. That were great ideas.

When attacking the camp, is it like raiding/looting or does the camp then belong to us?

Their siege system is so bad I lost 300 unsullied and 13 giants because of it...

Also where is Meeren? and the rest of slavers bay? is that being added? And the undead.... YOU NEED TO HAVE THE WHITE WALKERS.

What's more important to me - globl map balance. Only way to prevent Renlyfrom capturing KG is being Lannister merc. Player just has no chanse to see other variants of "fall-of-capital" script.

Love the mod, can't wait to play 2.3! Looking forward to the return of House Forrester.

I know you're not one to take in suggestions, but I must say, I have a few that might prove good. Before I begin, I've been following your work since 1.5, and ACOK has to be MnBs greatest mod by far.

In terms of possible 2.3 improvements, I have a few:

1) Revamp the companions to possibly reflect lore characters, or maybe add more noble characters.
2) Give all these companions appropriate banners if they're noble. For example, Melly Waterman has the Clegane banner, instead of a custom Oar banner like her house does.
3) Maybe add a few more prominent Lords with banners, such as Lord Duram Bar Emmon (Dragonstone), Lord Howland Reed (North) and maybe Lord Sarwyck (Westerlands).

Possibly, more "unused" banners could be added so users could create their own houses.

I agree on 3 of those.
1) And bring The Hound back
2) They also should have some civil clothes when they become lords. I never grant any fiefs to my companions becuase they look stupid on feasts in their armor and carry some weird stuff as their banners.
3) Exactly. Adding House Reed woud make a lot more sense than House Forrester which is barely ever mentioned outside of Telltale game. And there's A LOT more demand for a castle in The Neck rather than north of Winterfell.

What if when you do the targaryen quest around 50 days later the Blackfyres invade too? THINK about it Daenerys would lead the Targaryens and Aegon would reveal to be a Blackfyre and either become allied to House Targaryen or declare war on them!

There will be Mormont armor and shield?

Looks great in all hopefully diplomacy gets a tune up, as of 2.2 quests will break if certain factions get destroyed in Essos. Not only that Kingslanding is getting overrun way too easy by the Reach, maybe their garrison can be buffed to 1000 strong. The Iron Islands also should only declare war on the North SO the Riverlands don't sweep in and take newly captured territory in the North and then conquer the Iron Islands. As always great work and I can't wait for the next version!

I know this is a monumental task what I am about the ask/suggest.

Are there any plans (if not, take this as a suggestion (I don't expect you to take it, considering the work required.)) for more troop variation? As in the troops from the North look like Stark soldiers, but there are more houses in the north. So I was thinking if the houses could have some variation in the looks of their troops?

( I'm not a fan of the look of the Northern troops.)

the northern cav is much better in 2.2, but the infantry changes are very annoying because the stray from the shows precedant.

Not sure what you would expect, but they look pretty spot on from the show other than the shields. Maybe the Boltons could have their own unique troops, but other than that they are pretty solid.

Actually there are Bolton units aswell as Stark units. And they are different from normal northerners units. We can see them when we fight with Ramsay Bolton. (part of questline)

what time do u think it will be out?

So, how large are these Dothraki camps? Do they vary in size a lot, or do they stay the same? In the same sense, does the amount of troops we need to bring vary?

I would love to see a main storyline as in viking conquest if that's at all possible.

Dled it and played for about a week now and I love it :D I just finished binge-watching GoTs with a friend so I was so excited to play this haha.

Hard to say what I think needs improvement...it's been very fun and detailed so far haha. I mean besides what others have mentioned like other sub factions etc. Those are just update stuff.

Hmm the only thing I can think of is I guess, making the naval battles larger..? I only say that because I was in a battle that was 400 vs. 1000 at a braavos siege. It took quite a long time >_< But maybe I had my battle size down at that time.

Will I be able to export my character with his stats and money from 2.2 to 2.3??