In the past week, I've completed the AI for the six finished mini games, the menu system, the instructions screens, and the Points Race mode.

I've gotten quite a bit of work done in the week or so since the last update. First, the AI for all six of the currently finished mini-games is done. It plays better on some games than others, but it is good enough overall that I don't automatically win the new points race mode, which was also finished up this week. In Points Race mode you play a number of mini-games back to back. You get a number of points depending on which place you finish in. First place gets three points and last place gets none. After all of the mini-games have been played, the player with the most points wins the Points Race.

Since six mini games and the results and scoreboards for them were already finished, much of getting the Points Race mode in place was just getting the menus done to get the game started. The game opens with a "Press Start" screen. 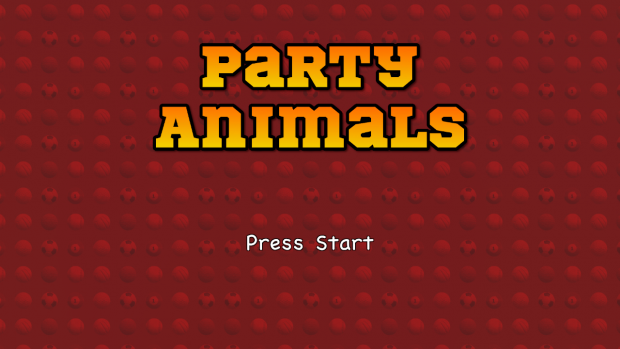 This is functional. The joystick (and player using it) that presses Start will be assigned as the first player.

After you press Start, you are met with the Main Menu: 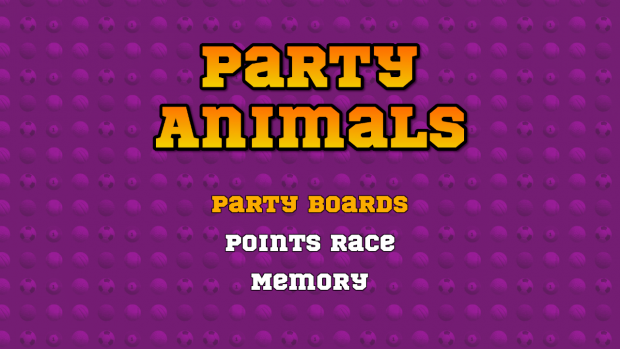 So far, Points Race is the only mode that is complete. Party Boards will be like the traditional board game play in Mario Party, the main play mode of the game. Memory is the card game by the same name. You play mini games for the right to take a turn. You will keep playing mini games until all of the cards are gone and the winner will be decided by getting the most pairs, just like the card game.

I'm thinking of adding a few more of the quick Mini-game only modes such as Points Race and Memory, so the main menu may change to a single item for those that opens up a sub-menu with all of the choices. That would also make more room for the Settings menu option, which will need to be added at some point.

Eventually you will make your way to the player select screen, shown below: 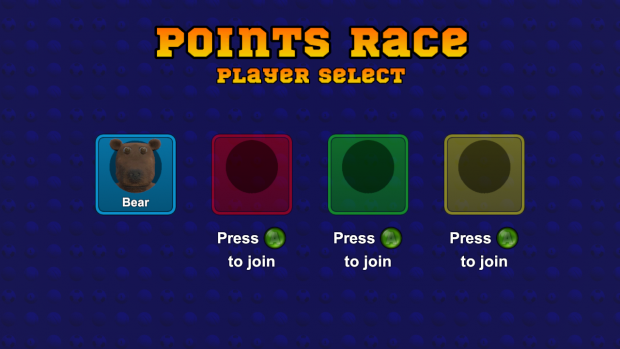 Here, other human players can join the game. As I think I mentioned in a previous post, eventually the animals will have proper names, so Bear is just a placeholder. Having the players join in this way allows the game to determine which player is using which joystick, much like the Press Start screen did for the first player. 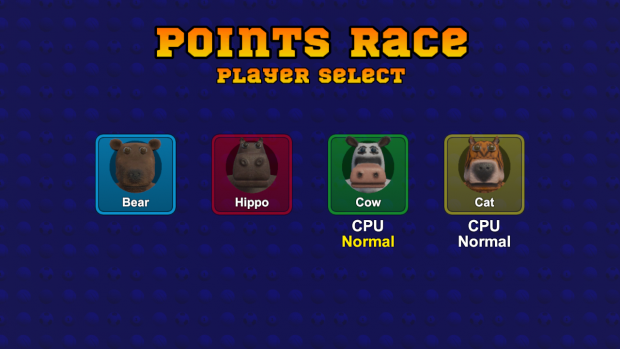 After the human players have all selected their characters, the CPU selections will be started. The first player handles selecting those. When they are all selected, the difficulty of the AI for each of them will be selected and it will be time to start the game.

The last thing that will be talked about in this post is that the instructions screen has been completed and filled in for each of the existing games. 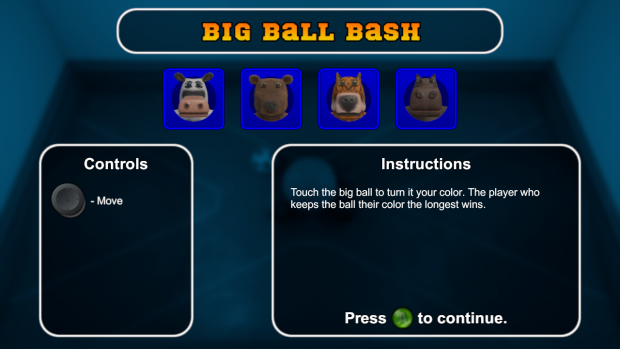 The background of this screen changes color to match the current leader of the game, just like the results and scoreboard screens do. In this screen the four players are all shown in blue. When the two vs two and three vs one games are done, they will be split between red and blue to represent the teams. The layout and code for that is in place, but none of the mini games to use it have been completed yet.

After I finish up some animations, I'll take about the new screens that show the winner, both in individual mini games and of the overall game. That will wrap up the things that I need to do in order to launch the Kickstarter and Greenlight campaigns (though Valve is ending Greenlight, I don't know how much longer they will be taking submisssions). So after that update, I'll get started on some more mini-games. The goal is to get Points Race mode on Steam Early Access after 10-15 mini-games are finished, depending on whether the Kickstarter is successful or not.