An effective, yet highly under appreciated, way of setting the stage for your game.

The past two weeks or so I've been chipping away at wrapping up Demons with Shotguns in a proper menu system. I’ve reached the point where I need to start gluing everything together and create a presentable game. Many developers (from indie to AAA) simply rush through creating their menus, which is a huge mistake. Your game’s menu system is the first thing players will see and interact with, and you should take advantage of this to truly set the mood and atmosphere for the game (Brutal Legend from Double Fine always sticks out as a great example of this). Use menus to set the stage and create an awesome first impression.

For Demons with Shotguns, I decided to create a somewhat cinematic, brooding, horrorish intro to the game world, directly overlaying the menus. The dark, suspenseful music sets the tone of impending competition. The stormy weather and clashing thunder symbolize the suspense. The dead trees, heads on a spike, and cemetery like setting introduce the horrorish, violent, gothic world players are about to enter. The large, rising blood moon creates an ominous presence, a feeling that these seemingly tiny characters are pawns of something larger and something bad is imminent. 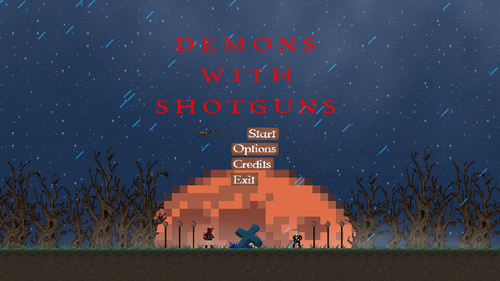 Now imagine if I simply decided to overlay the menu system against a black background or some tiled sprite? That doesn't compare well at all, does it. I lose creating a great first impression and failing to communicate with the player on a visual level.Take advantage of the fact that your menus are the first thing your player will see. Use this time to set a stage for your game.