The 7DRL prototype was entirely based on ranged weapons. While some special weapons had very short ranges, like the Mining Laser and Plasma Cutter, true melee combat was missing since there was no mechanic for it.

Now you can go at it with gauntlets, hammers, swords, chainsaws, and more! 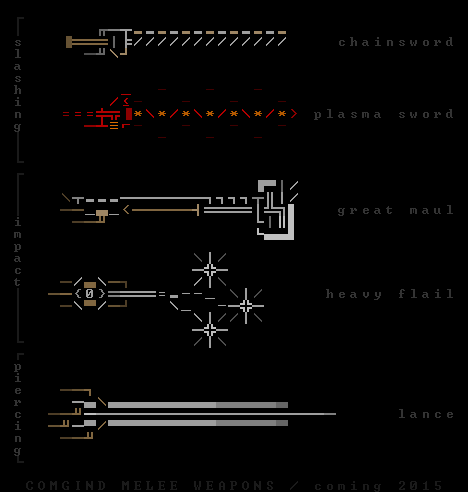 You do not want to be on the wrong end of this thing.

To balance them against normal ranged weapons, melee weapons will be more powerful since you have to close distance with the target, but also slower to actually use. They can also have extra effects, depending on damage type.

In addition to the original four damage types, three new ones have been added for melee purposes. Following is a complete list, since we haven't covered the original types in the context of the new Cogmind yet (the explanations in part describe weapons that do that type of damage):

Melee weapons will open up unique new strategies, like fast-moving builds that can quickly close the distance to a target and strike it down with a few powerful blows before coming under much fire. Impact weapons can be used to push enemies back, slashing weapons are useful for harvesting parts, and piercing weapons are most effective for quickly dispatching weaker enemies.

If you don't have an active melee weapon bump-to-attack still has an effect, although it's more of a last-ditch effort to survive: ramming.

Sometimes you find yourself unarmed, and possibly even trapped in a narrow corridor. Rather than give up hope, a desperate Cogmind can now ram into a target and often either knock it back or push past it. Weaker robots can even be destroyed in this manner. However, you aren't built to ram things, thus doing so has a chance of damaging your core or cause other negative side-effects. Still beats dying in a corner somewhere!

Next: Bringing out the big guns (literally) and non-part items (blasphemy!).