First look of playable characters with their strengths and personalities in the world of Battle Splash.

Hello, everyone! It has been quite a while since the latest DevLog in IndieDB as we’re very busy during the release of first pre-alpha build. During the release, Battle Splash has attracted quite a large audience from around the world with thousands of downloads, tons of play hours, and lots of valuable feedback about bugs and stuffs. This is beyond our expectations when many people are really interested in Battle Splash, as well as voicing their initial opinions for this pre-alpha version. Therefore, thank you very much for your great supports that contributed to our game. 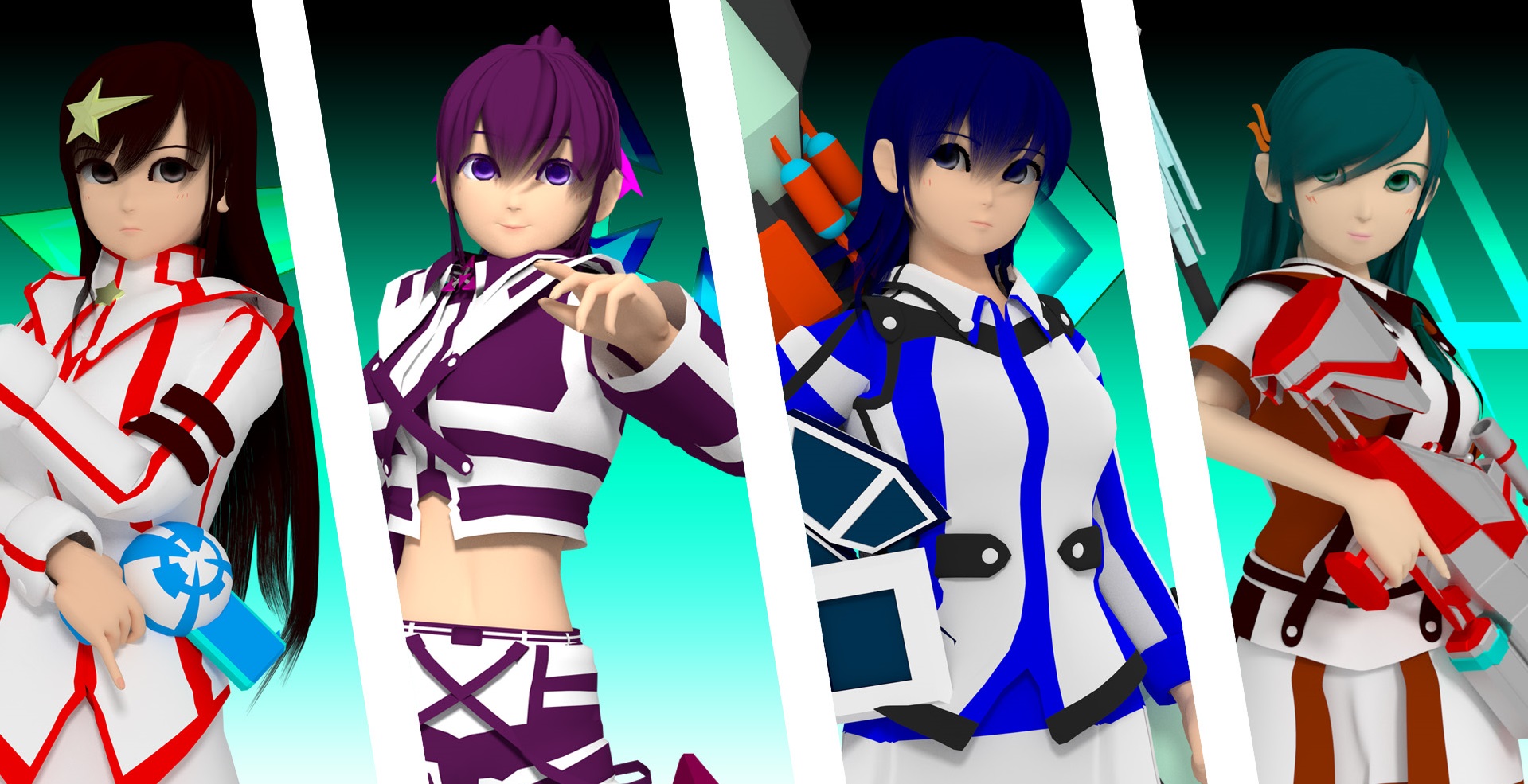 In this DevLog, we would like to talk more about our girls, members of the prestigious but eccentric family of Polyga that about to step in an adventure in the world of Battle Splash. The game itself is an invention made by Trianga, titular heroine and the brain of Polyga household. Being proud of her own creation, she invited her cousins to try out the game in the family’s garage for some simple water fights within the colorful virtual playgrounds. 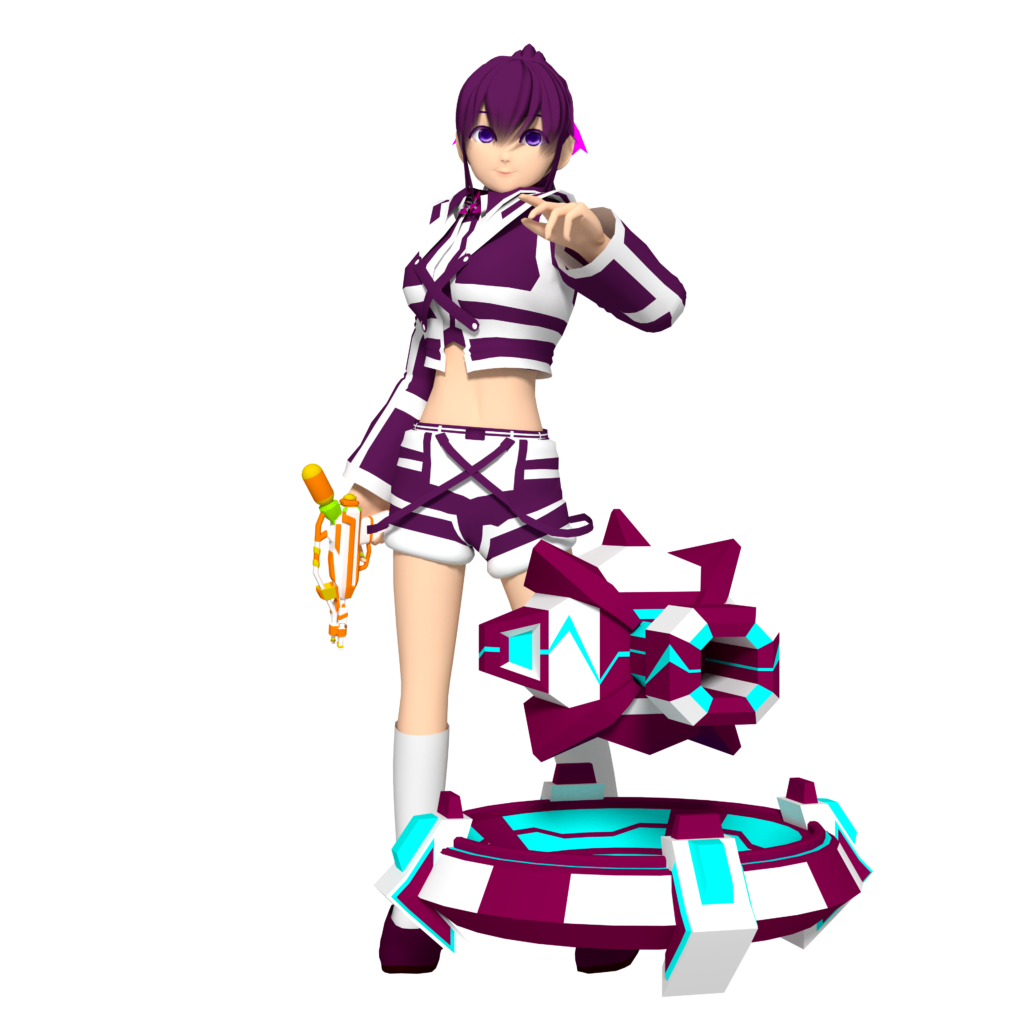 Trianga is the 4th daughter of the Polyga household (in terms of family position). She is Quadra’s younger sister and treated as a little genius in Polyga Family. Active and Creative, yet Clumsy and Emotional, her creations came from the combination of her practical problems and her childish imaginations. She gets depressed easily whenever she fails, but as long as there is her sister, Quadra, who always encourages her, she will continue to smile and start working again.

Fast yet Clumsy, her accuracy and strength is considered as mediocre. In returns, she can run pretty fast and cannot be take down easily. Her Turret is designed to be as powerful as possible. Her Turret can stick to any surface, and can detect the others by body-heat sensor and take them down quickly. 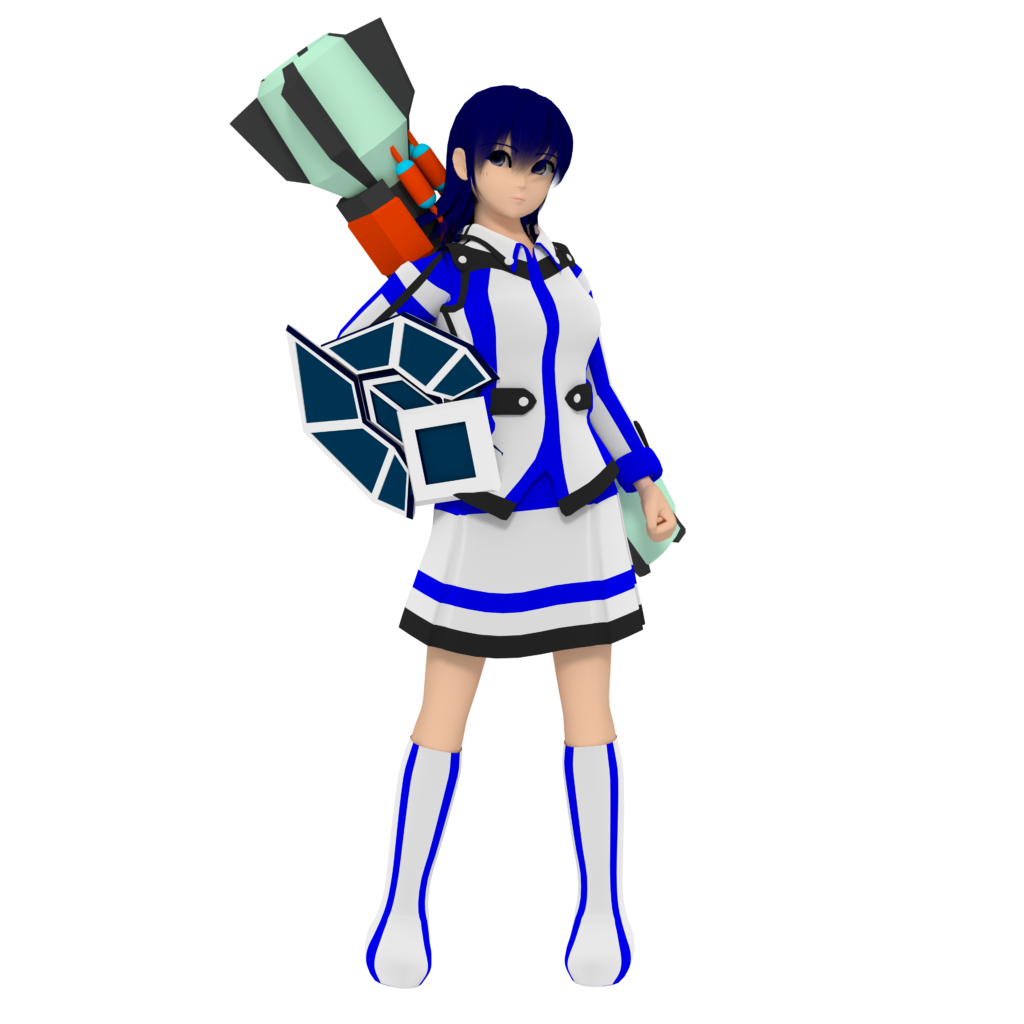 Quadra is the 3rd daughter of the Polyga household (in terms of family position). She is the second oldest girl of the Polyga family, and she has Trianga as her younger sister. An introvert, calm and thoughtful person, Quadra finds it quite comfortable when she spends her free time enjoying books in a nice and quiet area. She came to Battle Splash as of Trianga’s invitation and her will to protect Trianga from her own inventions.

With her strength and stamina, nothing can slow her down, except for…. her own weight. Slow but firm, she is a seasoned shooter with high accuracy and she can take a large amount of penalties, thus makes it hard to take her down. Her Digital Shield not only can protect herself, but also deflect any bullet that comes to contact. In addition, it can destroy any other opponents’ Item(s) in close range. 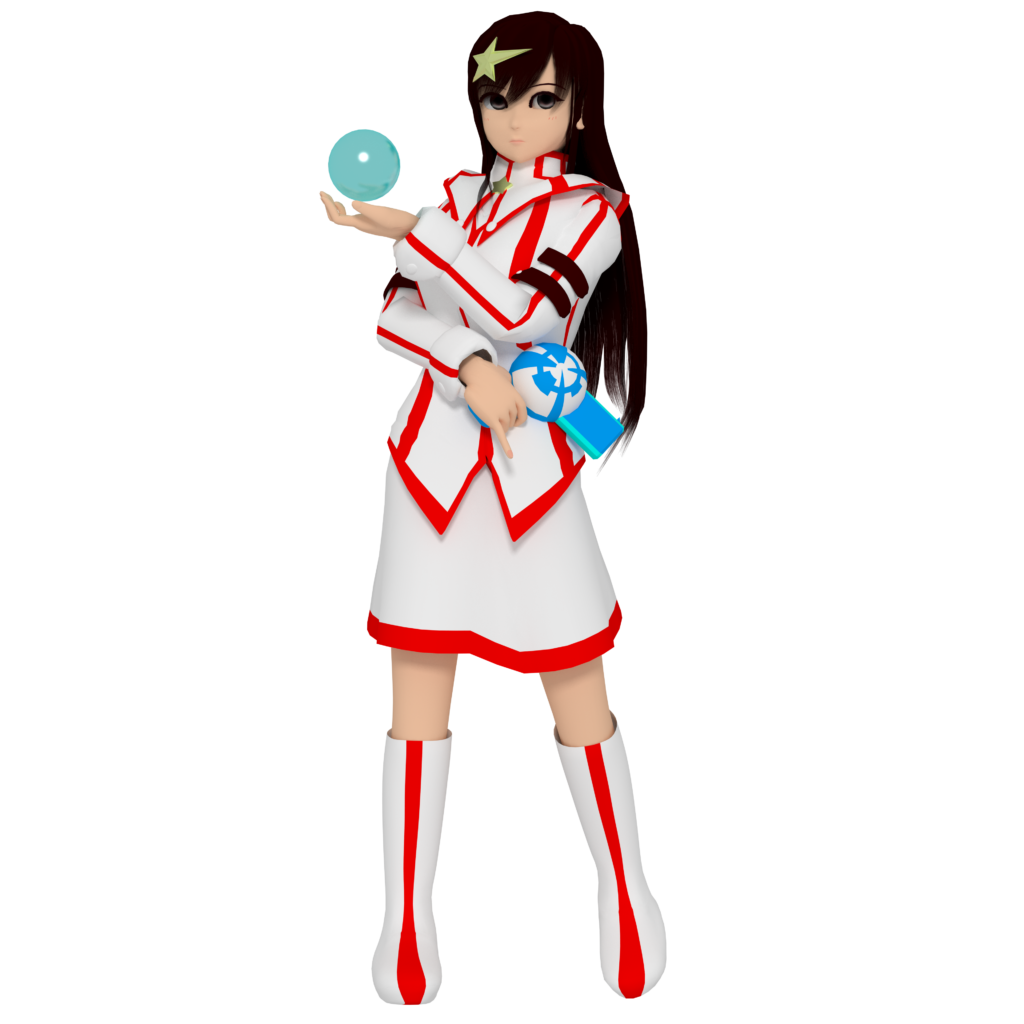 Pentaga is the 2nd daughter of the Polyga household (in terms of family position). She is the youngest among her sisters and cousins, but since she comes from a higher family branch, her position in the household is higher than Trianga and Quadra. Despite sometimes being irritating and childish, Pentaga always tries to be a model of perfect sister: modest, noble and kind. That’s why she was nicknamed “Little Big Sis” (for her personalities) and “Penny” (“A small, yet worthy piece”). Pentaga came to Battle Splash since she was dragged by Trianga and somehow attracted by the game.

Balanced between strength and speed, she is most suitable for both offensive and defensive role. Furthermore, Pentaga’s Disk Dryer can dry out teammates or even dry them out completely, allowing them to return to the fight ASAP. 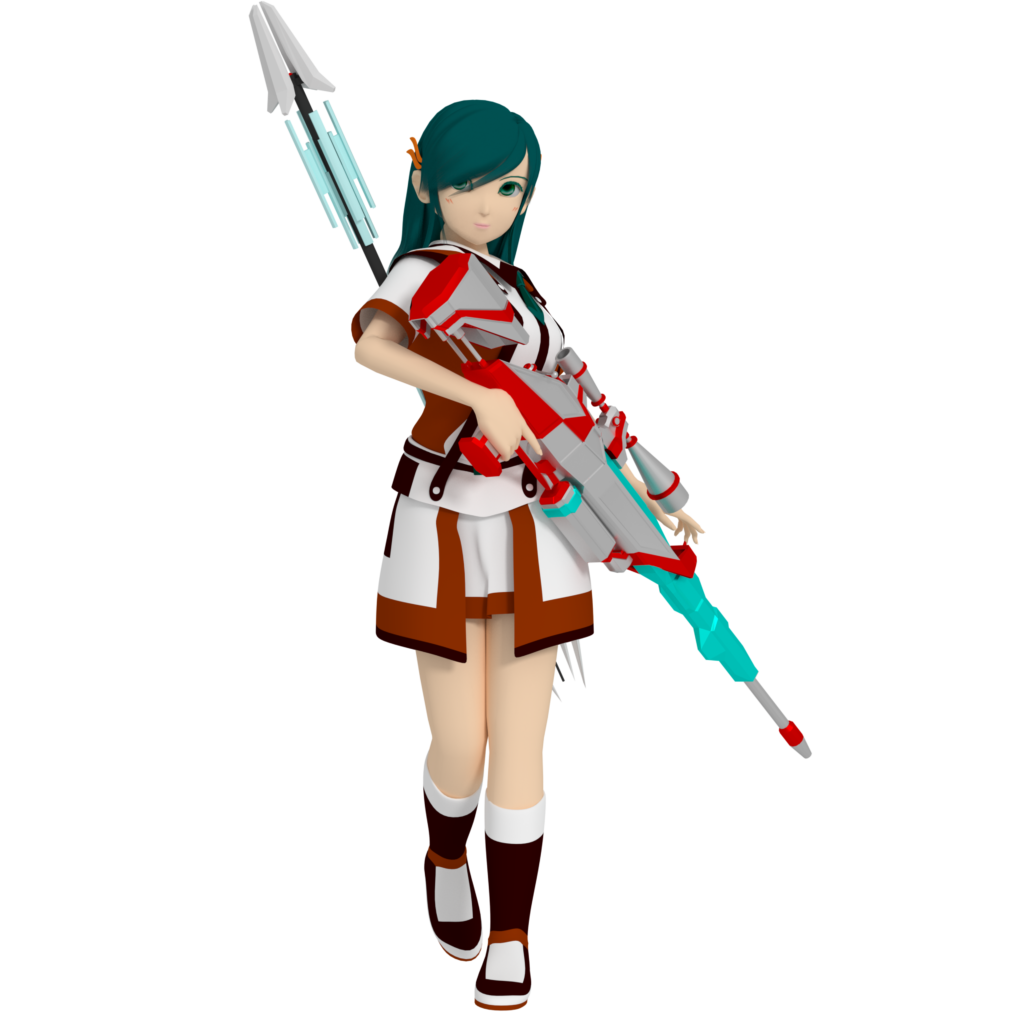 Temiko is an adopted member of Kangara household. At the moment, she takes “Lotus” as a nicked name and running a Private Detective Agency. As of her strong will and stubborn personality, she sometimes can be reckless and tends to solve the problems on her own. Came to Battle Splash because of the boredom of work and Trianga’s taunt. She was tired of the game at first, but start enjoying it later on.

Fast and Accurate, she is evaluated to be a skillful Sniper as well as a great Scout. Although being able to dry up herself quickly, she can’t take on too much splashes. Her Recon Pole is extremely useful for hacking teammates’ HUD, showing nearby opponents’ positions as well as there Special Items.

Despite having different personalities, the girls are bound together by the sweetness of sisterhood and friendship, willing to take care of each other whenever there’s any trouble. But that bond is going to be tested by unexpected incidents that about to occur within the playground of Battle Splash.

Stay tuned for more info in this page as well as our social media with the links below.