Welcome our new playable characters and learn about their unique abilities and features in Mustache Ride: Rainbow Edition, coming soon!

Let's give a hearty welcome to the new and returning characters in Mustache Ride: Rainbow Edition! Today we're only going to cover the playable characters (Alex's Mustache Pods), but rest assured, Xandri and Douglass are back in the cafe (and with new scenes, too!) 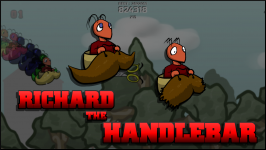 First, we're going to take a look at Richard, our returning hero from the original version of Mustache Ride. Richard is still going to be carrying Alex in his Mustache Pod from the start, and he has not changed one bit! Well, aesthetically, just a little. He now emits a rainbow trail (as do all the Mustache Pods) when they player reaches a 10x multiplier.

Richard is important to our new character introduction, however, because he set the standard for the characters' gameplay designs. Richard was considered to be the 'normal' way to play, so the new characters were designed around that.

Richard's handling is fairly normal -- he takes a bit of practice, and can't easily reach all the items all the time. His control scheme will seem normal to new and returning players alike -- tap the screen and he will bounce higher in the air. You may recognize this play control from games like Flappy Bird or Jetpack Joyride's Profit Bird character. The bounce is similar to many platform games' "double jump" ability as well, so it's easy to learn and understand. 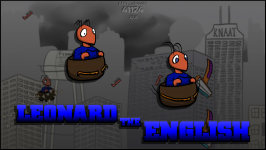 Next, we'll focus on the first of our all-new characters, Leonard. Leonard is a new Mustache Pod that players will discover quite early in their quest. Make sure to regularly visit the cafe, where the game's story unfolds, so you can unlock this new character and play style as soon as possible!

Instead of constantly falling, Leonard's whiskers act as propellers to constantly lift Alex up toward the sky. By pressing (and holding down) your finger, key, or button, you can disengage the whiskers, which will slow to a stop, and then Alex and the Mustache Pod will begin to drop, continuing to accelerate downward as long as the button is held.

Because Leonard's speed can vary greatly depending on how much time has elapsed between button pressing or lifting, and because the player controls a dive rather than a bounce, Leonard is considered to be the most difficult Mustache Pod to control. It will take a large deal of practice to control Leonard well.

However, the practice could very well pay off. Leonard's scoring ability is the greatest of the three pods. Wax Tins will appear at a higher rate, and the multiplier will go up much more quickly. Not only does the multiplier have a bonus each time it raises, it also raises more often, because multiplier raises both when wax appears and when wax is collected (as with all Mustache Pods).

Master controlling Richard and you could be on your way to phenomenally high scores! 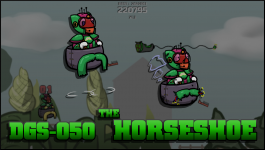 Lastly, I'd like to introduce DGS-050. DGS-050 is a very special type of Mustache Pod. With a much more intricate design than the other two, this pod is a special reward for the most skilled players. I believe anyone can unlock him, though, with enough practice! So this is truly a special treat for fans of the game.

DGS-050 is very agile compared to the other pods. He can dart quickly up and down, and when the player is not pressing the button, he hovers in place vertically, so there is no risk at all of falling or rising too high! Of course, you can still navigate him off the screen to a Game Over if you're not careful. Because of his fast movement, though, DGS-050 can easily reach a comb or wax no matter its location on the screen. Rack up high comb~os this way!

Because he is fast and not affected by gravity, DGS-050 is by far the easiest Mustache Pod to pilot. But because of this, his scoring capabilities have been weakened. It takes a much higher comb~o to make wax appear, and multiplier goes up at a stunted rate. Because he has such agile movement, though, it may be possible to stay alive much longer than normal and still acquire many points. 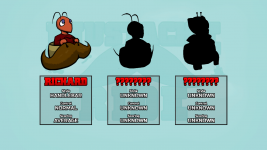 To collect the Mustache Cards and trigger/unlock new scenes in the cafe, you'll need to focus on different aspects of scoring -- surviving for a long time, collecting many combs, deflecting many enemies, or just getting a high score. DGS-050, who can move quickly but doesn't get much access to wax would be good for getting a high comb collection or reaching a high comb~o. Leonard, who can collect wax more quickly, could be good for getting a lot of deflections or collecting a record number of wax tins. Richard, who has the most familiar control and decent scoring capabilities, may be the best for getting an all-around high score or hunting the elusive pink razors doing something else.

I hope you'll have fun unlocking and playing as the new and returning characters in Mustache Ride: Rainbow Edition when it is released!

Feel free to play the original version while you wait for Rainbow Edition (practice up to unlock DGS-050 faster!) or support the game with a donation by visiting the official web site, where you can find links to download the game or play online, as well as fun goodies like the soundtrack and desktop wallpapers.