Today we show off a new model for our venerable Beretta M38A, as well as the less common M38 model.

Today we are bringing a bit of an update to our Italian faction, with a remake of their Beretta submachinegun to replace the venerable model made by McGibs for the original Forgotten Hope. Before that though: a quick reminder that Slayer's tutorial series has continued on and is now up to episode 9. You can see the full playlist here. 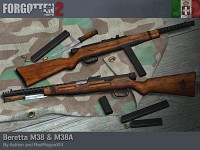 In the mid 1930s, Beretta engineer Tullio Marengoni would work on a new submachinegun design, based on their existing model of 1918. This new model 1938 was an extremely well machined and reliable gun, aimed at the military and police markets. It would be adopted by Italian Ministry of Colonies to arm the Polizia dell'Africa Italiana, and several thousand were purchased. This first model was fitted with a bayonet lug, and was designed to take the same folding bayonet as used on the new Carcano M38 short rifle.

Orders from the Army were not so forthcoming however. They requested a few cost cutting measures leading to the model 38A, removing the bayonet and changing the muzzle brake design. The Army would issue their submachineguns sparingly, funnelling most to paratroopers, Blackshirts and military police units. It was a highly regarded weapon, seeing further cost saving updates later in the war and being widely used by the Germans after the Italian surrender.

Our Beretta Model 38 was made by Ashton and RedRogueXIII, with Seth Soldier's Carcano M38 bayonet.