The third Media Update which will introduce new weapons, maps and giving an overview about the development.

Here we are with the third media update for the upcoming Doom 3 - Modification Desolated. It's now two and a half year ago when I was starting, just remembering like it was yesterday. First it was planned as an Hell Island 2: Parallel Universe where all the good maps of Hell Island would be in and some new. But that wasn't enough, why "wasting" time for something like that if you can create something real new? And well... now Desolated ain't that far away from the release. But before there's more about the development process, some new things to show: 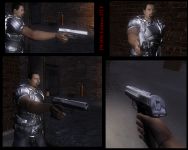 In the latest news I forgot to introduce the new pistol which is actually a Walther P8 but modified. I chose this one because I've seen it when I was doing my military service back in the days. So I hope you like that one... 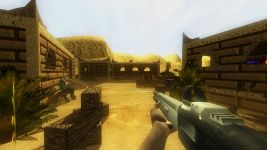 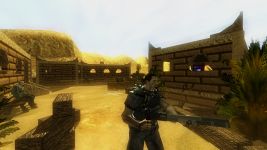 This here is the new shotgun, first modeled by pvt.Johnson but he didn't made it to finish this one, so I did the last little changes on the mesh and textured it. Cause in that time I had to finish the bossfight as well, Neurological helped me to with the implementation, that's why my thanks goes to the both of you! 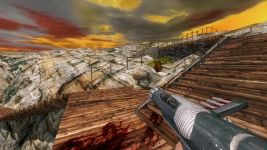 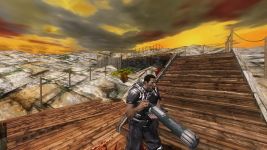 This one above is the new rocketlauncher I did, so now only one weapon is left to accomplish the goal to feature complete new weapons. And as you might see, with this shots I'll give a tiny look at the they-level which is the last one before the bossfight.

That's it for now about the weapons, the last one missing will be in the next news item. Now some things about the technics in the game and the new shaders, let us start with the motionblur I forgot to mention in the last news. It's just like it sounds, if the player moves fast the screen becomes blurry which is a real nice effect, thanks to Neurological for sharing this one with us and also many thanks to my coder MacX for the implementation: 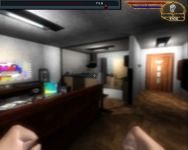 Okay then, those have been all the shots I wanted to show now let's talk about the slowmotion first, we made it to finish that feature and it's fully working. The blue bar is showing how long you can have this effect, kinda like with stamina from Doom 3. To activate simply press "X" and the time around you slows down... it's not a must to use, but especially for fast enemies and flying monsters it's damn helpful same as for the bossfight.Currently we're still trying to implement the cel shader which is complicated. Skippin managed to invest some time to make it work but it ain't done yet so we'll see. If it causes too much trouble we have to leave it out.

For the development process I can tell you, all maps are basically done. So there's no more map left to do, the last one I finished is the epilogue-map with the bossfight (which is going to be intense). Few days ago I gave the alpha v0.93 and v0.94 to the testers to let em find bugs and to make sure the gameplay works. If they're done completely with testing it's time to do the final changes to the maps. Meanwhile Neurological will work on the sound (soundtrack, ambient sounds etc.) to make sure it's not a complete disaster like with Hell Island (my first mod) and he did great jobs on other mods so it's definitely a thing to look forward to. When we managed this the storywriter should be done as well with the story so the last (and most challenging) thing to do is implementing the story. For that, we're searching voice actors so if anyone is interested write me a pm. We need a lot of them, especially for all the npcs giving quests and such. The best ones we could offer main roles like the player and an old man. But there's no rush for that currently, because first we have to finish writing the dialogues.

This definitely is a long news I guess, but if you made it to read till here I got a real cool information for you: soon, in about 2 weeks, there'll be a teaser-trailer to prepare you for the mod.

Okay then, this is it for now, hope you liked it and still look forward to the mod. Just one thing is left to say: Please comment on this news and the shots, then I can include your suggestions!

TO BE DELETED Developer & Publisher