Only a few days after going public, we've released several pieces of art to give the community an idea of our game's visuals. Let's review!

Concept Art
Our talented artist, Linfosoma, has been hard at work putting our thoughts on paper. Below are a few samples of what he's made public so far: 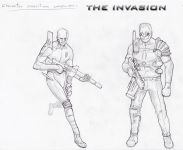 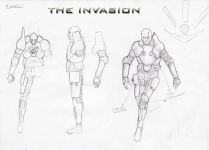 The commander's role on the Human team is very much like that of a top-down real-time strategy commander - minus the top-down. Commanders on the human side will be able to fight alongside their soldiers while being able to bring up a separate tactical map that allows them to issue upgrades to squads, manage and arrange squads, and plot strategic waypoints and coordinates. The Humans are much less subtle than the opposing Anthropoids. Their best offense is attacking in numbers and with a bang - they have plenty of firepower to prove a point. 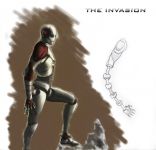 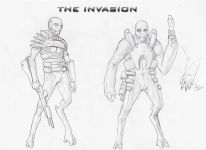 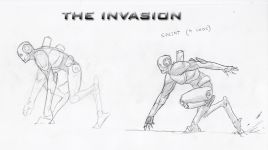 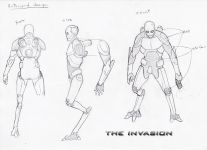 Our new website is in the works to support the addition of this new project, "The Invasion". We hope that the modding community can be at peace knowing that this project will not be a failed attempt at starting one, we very much plan on seeing it through to the end and are hard at work to do so. We encourage all developers who have the desire to work with our team to look at the previous news posting here and view our current needs (remember, all applicants will be considered if your previous work is exceptional - we are looking for three [3] new team members, but will add more at the exception of skill every other week). Send your application or inquiry to nrainha@gmail.com - your E-mail will most definitely be responded to within 48 hours. Good luck!

See you in a couple of days for a more in-depth look at the gameplay!

Nice concepts. Going to be looking.

I'll be waiting patiently for other media than concept art.

Thank you all for the support!
Im working on an actual 3D model now, I'll post pics as it progress.
You should also expect a color illustration of both the humans and the aliens over the weekend, or maybe on Monday.