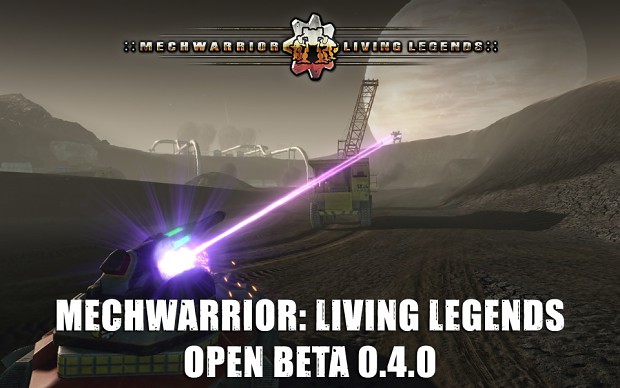 MechWarrior: Living Legends is a total conversion modification for Crysis and Crysis Wars that buildes upon MechWarrior and BattleTech games of the past to provide players with an entirely new combined arms combat experience. Players make use of 'Mechs, tanks, hovercraft, VTOLs, aerospace and powered armour to engage in battle across massive otherworldly landscapes.

Terrain Control brings a new objective-based game mode centered on the capture and control of key locations on a game map. Kills and enemy damage are still a factor, but are weighed less than having terrain under your teams control. MWLL 0.4.0 Total Download Size :: 2.2 GB For a more detailed list including bug fixes and some known issues (not all of them) please refer to our Changelog page.

Since our initial release (Tuesday December 27) we have had two hotfixes to address unforseen launch issues, bringing the current release level to 0.4.2

Click here to visit our site for download and installation instructions.Â The download file has been uploaded to moddb.com under our Downloads page and is currently pending authorization.

This is super awesome!

amazing! i have to test it today

does this work if you have an installation of crysis wars without a cd-key?

So.. I only have Crysis. What are the perks of playing this mod on Crysis Wars? Thinking about buying it just for MWLL.

So if I have both, I should move over to using it in Crysis Wars. I remember playing with one of the devs online, and he was a really cool guy (eh doesn't afraid of anything); is it safe to assume that most of the devs are going to be active on the Wars version (when not slaving over the mod, of course)?

Ok. Thank you for the reply.

You get an extra piece of cake with Crisis Wars.

Why isn't this on desura guys?

How do I switch from Crysis to Wars if I already have it installed on Crysis? I have Crysis Wars.

Just download the new version at Mwlldownload.com
Make sure you select a Wars installer, and hit the download button to the right of the drop down menu.

Does this have Single player?

No singleplayer. It would be great to have it but it took a monumental effort from these guys just to get to this point.

Would try it, but the auto-updater insists I should HAVE to upload as well.

Brilliant mod you have here! The only server in my list is greyed out and it's not letting me create my own, so in other words: I can't even play the damn thing!! (Bad enough that my MW4 arrived this morning and is refusing to install!)

WTF?! For like the fifth time I tried to play I get a pop up 4.* is available! Why couldn't it just find the latest update in the first place?

OK sorry about my last post, that was the last update... and they were quick so no big deal. Props to releasing an awesome playable mod!

i'll only say this once.

MAKE THIS WORK FOR STEAM PLEASE. I spent ALL weekend trying to get it to work. what an enormous waste of time it turned out to be.

(mind you: it looks great, but when you build yourself up to play somthing fun and end up getting dissapointed what else are you going to feel but rage and an urge to blame sombody.) if you can make a mod you can make this work for steam. so please do so.

It works with steam, i and several others i know are playing it with Steam version of Crysis Wars / Crysis. If you have problems try getting help over at our forums.

no single player. yawn fest. crytech engine is ******* awful. it's been what, 3 years and there's only 3 playable mods out. once again, ******* awful, inconvenient(intentionally) engine.

@ psykogundam, you're an idiot. this works for the steam version.