An in-depth explanation of the range map system and what it means to your survival.

As I develop this game, I have many ideas floating around in my head and on paper about how this game will be played and how the many mechanics will all come together to make this a great little game. A problem I've come to realize during my development is, while I have this vision in my head about what RPC is, it's all in my head! So I've decided I need to start explaining these features to the fans!

So, to remedy the situation I've decided to start posting some news that isn't so much just about the new features I've added, but more a general blog about the game and it's many currently existing and planning features to give you guys an idea of what the full scope of RPC is all about.

For the first "Mechanics Blog", I've decided to explain the range system, what it is for and what it means to the player. When you start a typical game of Retro-Pixel Castles, you will start with a handful of villagers on a random or preset location on the map (depends on the map's configuration). From there, you have no buildings, all you have is your handful of villagers. You will be allowed to build one, and only one building to start off with: your village center.

Once you find a suitable place on the map to place your village center, your villagers will start building it. Once completed, a colored range map will pop up. From here on out, the only land you can harvest, farm, and build on will have to be within the range of your village center and it's future connected buildings.

Here's a small village, with the range map visible. 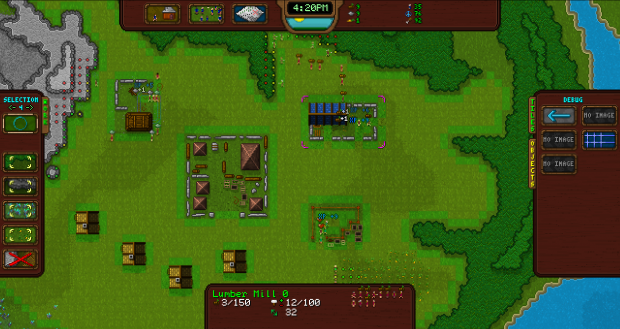 Now, because you're restricted to building within that range is seriously limits your ability to defend yourself from the onslaught of the monsters that will spawn, and eventually engulf the map. So it's up to you to expand your range quickly so you can put up walls, towers and other defensive elements in key defensive areas.

Almost everything you build adds to this range map, some more than others. Currently planned, the two main ways to quickly expand your range is to build light sources or guard towers. Light sources are mostly non-functional, and really their only purpose is to expand your range map and provide light. But, guard towers will also house soldiers who can defend your city and offer a substantial increase to your overall range.

Some builders, building a new light source (Small wood torch) on the edge of your range map. 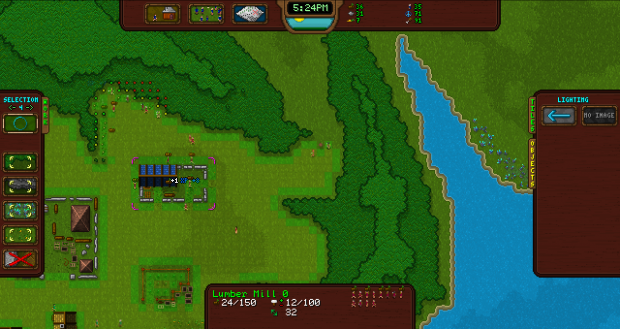 As you can see in the above shot, they are building right on the edge of their building range because they can not reach around and build up north. But, once the light source is built, the range expands, allowing them access to the terrain north of their village.

They have expanded their build range and started harvesting wood and building some homes in the new area they now control. 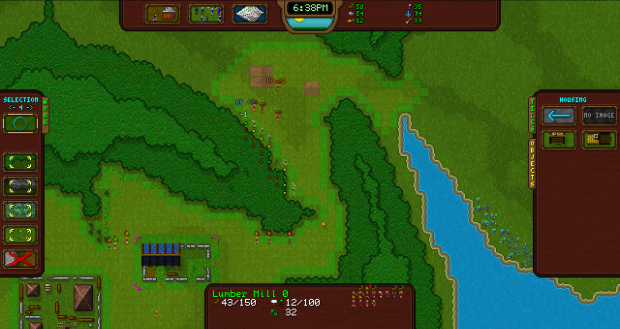 While this seems like a somewhat minor mechanic to talk about, this plays a very critical role in how you manage your village. When playing you'll want to attempt to bottleneck the monsters attacking you into key points where you can kill them off so they don't harm your villagers, the problem is since you can only build within your range map you can't simply just run off to each edge of the general area you've established your village and block off everything everywhere. You have to build out your range map in those directions. All the while, the monsters are trying to eat your poor little villagers! :)

Feel free to leave a comment about what mechanics you'd like me to cover in the next "Mechanics Blog"!