May news update for the Warhammer 40,000 themed mod for HL2, Exterminatus. 4th round of beta testing has begun on the Orange Box version of Exterminatus. New In-game action footage. Thanks to Crynid and Farseer for their contributions. A conundrum, to be solved by next month.

This month we completed our model trade with Renegade 40k, a couple of high detail RenX weapons, for one of our Tyranids. The weapons models should come in handy for a later release, we're not planning to add any more weapons to the the first version of Exterminatus as we've frozen the EX feature set to focus on balance. In the weeks since our last news post we've conducted a seven small scale beta tests, which have improved the stability of the Orange Box version and balance and learning curve of the maps. 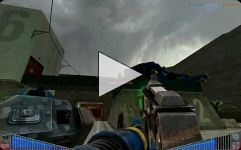 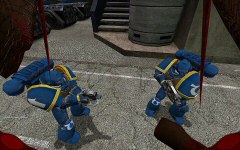 Exterminatus model contributor and beta tester Farseer17 would like to thank Micheal "Cryrid" Taylor of XSI Forums and Cryrid.com for his help. Here you can see an in-game shot of a prop Farseer built for Typheron's latest map "Thunderhawk". 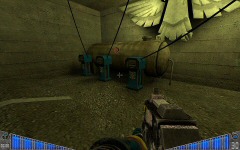 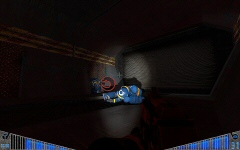 We have some minor loose ends to tie up, however I (ChromeAngel) have the feeling there is not much more we can do with closed Beta tests. With some time consuming, real life, commitments coming up I foresee one of two things happening:

1) A full playable public beta release of EX next month, allowing us to gather feedback on large scale games, the work so far and maybe attracting a few new contributors.

2) EX "goes silent" during this busy period (possibly lasting several months) and until I get time to polish up the mod to a more public friendly, playable version.

Now, because I would be busy their wouldn't be much in the way of support for the Beta and as it stands the EX Beta *might* permanently deter the more demanding or optimistic players if I were to go down that route. The decision hasn't been made yet, so watch this space...

Yes i can t belive it, we have a release next month WOOOOOOOOT!!!!

Oh wow.. I hope this doesn't "go silent" and that we get the chance to play a public beta!

I thought this mod was dead. Nice to see that I was wrong.

Great to see that this hasnt died!
I really would like to play the Beta, i hope you guys release it :D

honestly, if it's going to be several months before you work on it again, you should release. most people will assume it has died and you will lose players anyway.

if there are no major balancing issues, no major gameplay bugs, and few map problems you should definately release.

Its 40 frickin K people will put up with a few bugs for the chance to chainsword their friends to death.

the fear is theres a bug that ruins the game in some way, something we have not been able to spot as yet.

example, what if we released and someone found an exploit where they could kill at range with the Tyranid claws, or attack while cloaked as the Lictor. Something like this would be extremly bad for the game as it would be an easy win for one team and no one would want to play as the other team.

Worst of all as were going into a busy period for all the Dev members, we would be unable to properly address any bug and patch them accordingly. It could be several months before Chromeangel is free to code a solution.

The playerbase and community would surely die during that time of broken game. Its quite the Dilema.

on the other hand, it IS 40k and it IS on source. it is bound to be popular, and a few coders might be willing to do bug fixes if they like the game.

if we could get some coders willing to do minor bug fixes would it help you make your decision?

on the other hand, you dont want people who use those exploits(a.k.a. griefers) in your community anyway.

Indeed, I fully agree with cyber_spaced. If ther current version is playable you should definately release it before people start to lose interest in the mod because they assume it´s dead.

It feels so much closer now!
:)

Finally we could have our hands on this beauty. Thanks guys. You're doing great. But, oh man, so much expectations.. Haha.

I still can't wait for this haha. You guys are doin' great. :) I'll be waiting faithfully for a public release. :D