See what's for sale at the market stalls that stand on the streets of the Ilsamir Capital. 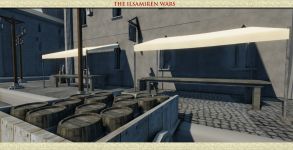 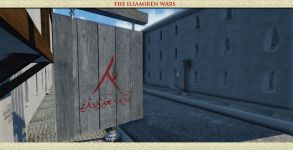 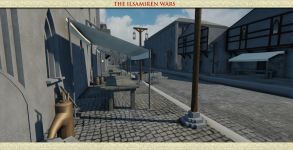 Left to right: barrels waiting to be unloaded, a shop sign and a street-scape

The markets of Darineth operate more or less every day, except during certain religious festivals, and you are likely to find a few stalls set up on almost every street. There are also two larger market spaces in the city's north and south. Although merchants generally own a shop (marked by a sign, like the one seen in the centre above), it is quite common for sellers of all goods to set up a stall right outside their shops or in one of the two market squares. 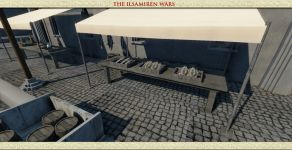 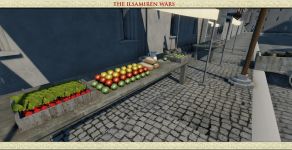 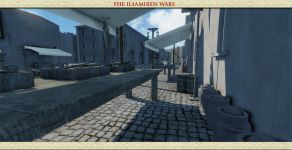 Left to right: stalls and produce, a green-grocer's stall, wares of a fish and oil merchant

Darineth Alir (the Province of Darineth) has a cool climate which allows for the sale of fish and meat on the streets for much of the year. A side effect of the cool weather is the inability to cultivate two of the crops which the Ilsamiri prize most - olives and grapes. Their strong alliance with the Southern Kingdom, however, allows them to maintain a steady supply from the warmer lands around the Bay

Help us populate these streets by becoming a character modeller for the IW Team. If you are interested, send me a PM or email containing a sample of your previous work.

Seen these on crymod. Looking really nice will be a awesome mod.

dude this is coming along awesomely!!!! if that a word. :)

Looks quite nice, and while I'm sure it's quite an early version, I'd just like to point out that it's really, really clean. o.o; Which seems a bit odd. But besides that, good shots.

There will certainly be greater variation and less order in later iterations - this will be produced as much by variety of assets as by dirt and grime.

It's a tricky balancing act, for me, between creating what people expect to see (medieval-style setting = filth) amd what I think such a society would actually look like (wealthy, organised = quite tidy).

Regardless, I will certainly be working more interest into this location, and I really appreciate the constructive criticism :)

A quick note: the textures for the roads and pavements have been reworked, and there are new textures for some of the other assets in this scene - the cobbles were tiling quite horribly, but they aren't any more ;)

You don't necessarily have to go overboard on the dirt and grime. I understand where you're coming from when you say you're trying to find a balance.

I think adding some color to your objects' textures will go a long way. The clay pots are obviously going to have a gray texture, but clay wasn't typically purely gray. Maybe if you add some yellow/orange/brown tint to show that they had to mix mud and dirt in with the mold to make it stick will get that balance you're looking for.

Also, any type of cloth in this era can have color. Currently, the cloth on your market covers is pure white linen. I had that kind of linen at my wedding and it cost about 8 bucks a square foot. Maybe add some color or simple pattern to the cloth, or even make it actual woven cloth? They might've been clean, but also keep in mind they didn't have sewing machines. :)

You could probably add a tad more color to your buildings but I'm not sure what style those are made in. Visually the buildings look boring when they're all the same gray color, but I know some towns made their buildings all the same way and the same color.

The tables could be a shade darker in the wood color. It's cool to see the wind-blown texture but I don't think the wind would remove all color from the wood itself.

You said you've improved the ground textures and the tiling has been a pain. I totally believe it was hard because there's so many little pieces! Keep in mind you can lay down square rocks to make a path, but mother nature will fight you at every step. Maybe add some weeds or grass creeping through some of the gaps in your ground texture. This would really give the paths more of a 3D/realistic feel to them and also help to break up the tiling effect (if you have any tiling issues).

Just my 2 cents - dunno if any of this helped you or not but keep at it!

The pots you see in the news-post images were actually not even current when I posted the news - I was just too lazy to snap some screens of the latest version (see link).

You have given excellent advice, and I will make use of pretty much every part of it :D