Mario Kart PSP 4.9 is now finally downloadable for all PSP systems and some PS Vita systems. The version is mainly focused on the Multiplayer feature since many people asked for an improvement.. 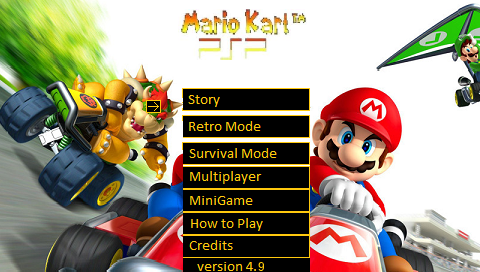 Mario Kart PSP 4.9 has some small updates in the retro mode, but something many people asked was to get the multiplayer menu more detailed. So of course, I did what the community asked, and made the multiplayer well detailed. Maybe more then that! 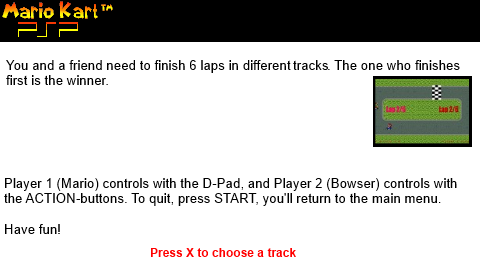 Not only the multiplayer menu has been updated. No! Also the retro mode of course. The Sonic character has been changed with the Shy Guy character. This decision has been made because Sonic never really has been in a Mario Kart game. Because of this character swap, there are a few bugs. Some of it are that Shy Guy still is called Sonic in some languages.


For the download link you can get it directly from our server by just pressing on it. You can download it as a .RAR or as a .TORRENT file. Some of you enjoy downloading it as a torrent. So why not?

Hell yeah! Love the changes! Keep up the good work!

Hi there! Don't know if you're still on this site anymore, but I just wanted to thank you for all the fun times this homebrew has created for me and my friend. We would usually go sit on a bench or somewhere quiet in recess and play a bunch of PSP homebrews together, and this one was one of them. I hope you have an awesome day!